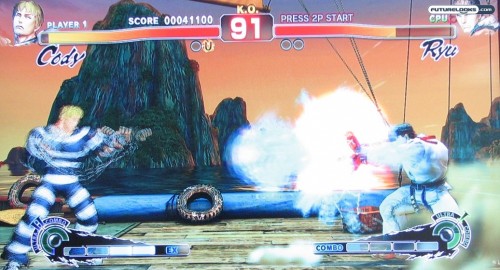 If you’ve been brushing up on your Street Fighter IV strategies in preparation for this release, you won’t be disappointed in your efforts. By and large, the gameplay remains much the same.

Capcom has made some small changes here and there to help re-balance the relative strength of the characters. Guile’s combos are marginally easier to perform and Blanka’s Lightning Cannonball has marginally more “chip” (blocked) damage. You may also notice some other small tweaks here and there.

Not that it matters, but you can’t put in that extra move the moment you defeat someone anymore. Also, changing your online title and icon is easier with one-click access to the utilities. 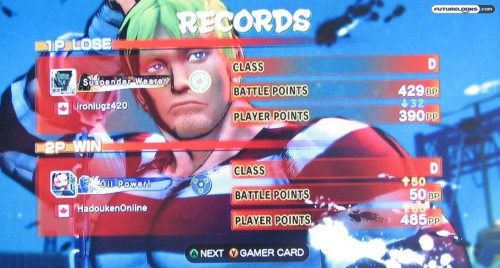 Playing against the computer is only fun for so long. Eventually, you’ll want to test your skills against other players around the world. As much as I liked championship mode in SFIV, it separated the competitive arm of online matches in two: regular ranked matches and championship matches.

The latter have now been eliminated, providing for a single unified system for playing against the best of the best. Even then, they’ve tweaked the system to better gauge a player’s skill. There are Player Points (PP), which represent your prowess in general, and Battle Points (BP), which are character-specific. This makes it much easier to see how your skills stack up against an opponent even before the first hadouken is thrown. 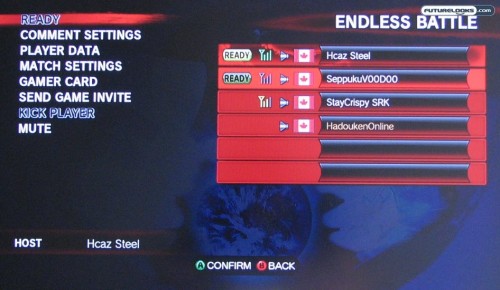 In late 2008, Super Street Fighter II Turbo HD Remix (what a mouthful!) was released on PSN and XBLA. One of its best features was the player match, more affectionately known as “quarter mode” among Street Fighter enthusiasts. What it did was mimic the arcade experience, offering “lobbies” where up to eight players could congregate. The top two names did battle while the other six watched. This mode went missing in SFIV, but it has returned in Super Street Fighter IV as “endless mode.”

These matches don’t affect your Player Points or Battle Points, but I find them to be ultimately more enjoyable. The social aspect is great, since you can chat with other observers just as you would in a “live” arcade.

I don’t think any game is ever going to dethrone the original Street Fighter II as the best fighting game of all-time, but Super Street Fighter IV has certainly improved on SFIV in just about every way. The roster of fighters is numerous and balanced, the new “replay” mode lets you study the moves of the experts, and the gameplay tweaks make a good brawler even better. Hakan is still a little too weird for my tastes, but he’s certainly unique… like a Borat-Hellboy hybrid.

Available for Xbox 360 and Playstation 3 at a reduced price of about $40 US, Super Street Fighter IV is well worth every dollar. It is unequivocally the best fighting game available on any current console today.