Gaming peripheral company ROCCAT has claimed to release the next in gaming mouse evolution with the Tyon gaming mouse. This latest wired desk rodent contains a whole host of programmable buttons, and multiple functions that are easily saved to the internal memory. That isn’t what sticks out about this mouse though, both figuratively and literally.

The Tyon has a middle button that ROCCAT has dubbed the dorsal fin, and when combined with the X-Celerator two way analogue stick to the left, it will help you move a large number of functions off your keyboard on onto your mouse. ROCCAT claims that this’ll help further your success in games by not having to hunt for various key commands while in the heat of the action.

You can check out the press release below, but unfortunately it doesn’t include and pricing or availability information. Perhaps Futurelooks will happen by ROCCAT’s booth at COMPUTEX 2014 for more info.

ROCCAT Unveils Tyon, The Next Step in Gaming Mice Evolution

Hamburg, June 3, 2014 – ROCCAT™, industry leader and high-water mark for computer game accessory development and design, has once again raised the bar for gaming control and precision with the Tyon, the next step in gaming mice evolution.

ROCCAT Tyon offers 16 assignable buttons, 31 distinct possible functions, and a near limitless levels of customization thanks to ROCCAT’s dedicated Easy-Shift[+] Button.  A true game changer, it answer the needs of an increasingly nonlinear gaming experience with the most extensive set of streamlined, tested and expertly designed features available in the market.

“Today’s gaming experience demands that players adapt to the many dimensions of gameplay, whether on land, at sea, in air or space,” says René Korte, ROCCAT founder and CEO.  “Our designers and developers worked in close collaboration with gaming experts to craft, test, fine-tune, and ensure that the Tyon’s abilities meet these challenges.” 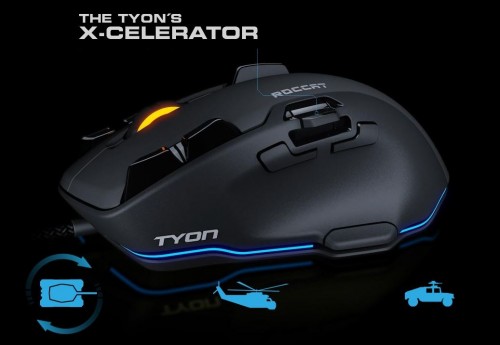 The Tyon is an efficient, combat-ready weapon and an aesthetically fascinating masterpiece in one.  It provides the simplest access to the most features in a gaming mouse, reduces the need to make hand adjustments on the keyboard with the ROCCAT X-Celerator and Dorsal Fin, and is exceptionally comfortable with exhaustively tested button placement schemes. 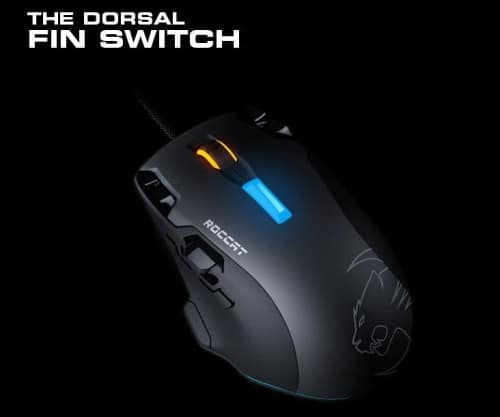 ROCCAT’s new X-Celerator and Dorsal Fin technology eliminates the frustration of being shackled to the myriad of keyboard commands by shifting major functions from the keyboard to the Tyon.  The X-Celerator is a two-way analog stick that allows gamers to throttle, sprint, rotate tank turrets, and more directly from their mice.  Roccat’s Dorsal Fin is a two-click button placed behind the mouse wheel that provides comfortable mid-finger gaming action and increases mouse functionality.

“Tyon’s stricking balance of form, function and visual appeal was achieved by understanding what gamers want,” adds René.  “We listened to gamers, tested the mouse with gamers and fine-tuned the mouse for both experienced gamers who want to take their play to the next level and the amateur gamers who wants to improve.”

The Tyon is available in black or white and comes with a 576kB onboard memory to store vast amount of settings and macros, and an 8200 DPI Pro-Aim Laser Sensor for pinpoint precision, lightning quickness and fatal accuracy when needed.  It also comes with programmable dual lighting RBGY illumination for both the lower rim and wheel of the mouse.

ROCCAT at Computex: I1209 in TWTC Nangang Exhibition Hall 1F