This is where things are going to get bumpy as the NT01-PRO was determined to not be friendly during installation. 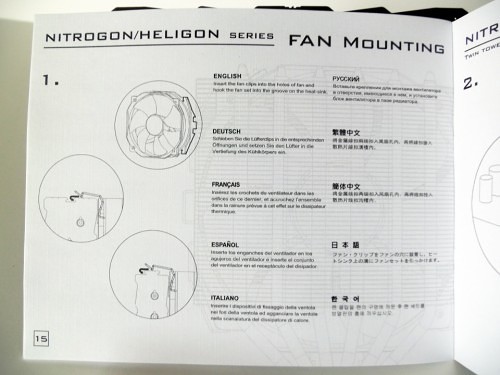 The user manual proved to be a mixed bag as it was designed for several different coolers from the Nitrogen and Heligon series from SilverStone. Often times I would come across descriptions of hardware I did not have such as fan clips. While this was not a problem, it proved to be confusing at times.It should also be noted that the 4-way mounting system is only available for AMD as Intel only has a 2-way mount.

At first glance there are simply too many pieces to the mount system. You will be working with 17 to 25 pieces just to marry the backplate and brace to your motherboard. Following the instructions provided proved very difficult. It will seem counter intuitive, but the best approach is to use all the pieces at once. This goes against how the instruction advise you to install the cooler, but our way will be much easier. 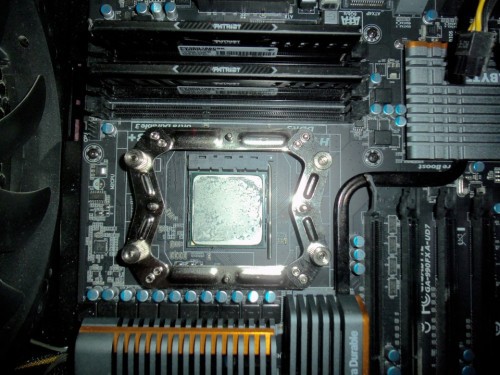 I found what you need to do is go one corner at a time instead of one piece at a time like you normally would. Take the back plate, put one screw through to the other side, slide on one of the spacers, then the base frame, and finish with a thumb nut with just enough tension to secure. Then repeat 3 times before evenly tightening all four thumb nuts into place. This is because the spacer will not hold the backplate in place while you work with the base frame.

Once the frame is in place mounting the cooler is just a single crossbar, but even this managed to frustrate me. The retention clip for the sleeve nut repeatedly come off making it difficult to attach the crossbar. Individually the sub-par instruction manual, fan mount, and complex installation would not be a concern but all three is just too much. In comparison, the company’s cases are much better documented and extremely user friendly so we know they are capable of producing better and more user friendly product.

Eventually I got everything in place so let’s get to some testing and performance figures.

We tested the NT01-PRO on both of AMD’s platforms using an FX-8350 and an A10-5800K. We also tested it with the 100W TDP A10-5800K with no fans which is well beyond the 65W TDP limited recommended by SilverStone. Both configurations were overclocked to 4.4 GHz with no voltage increase for the overclocked testing. Lest look at how well the NT01-PRO performs. 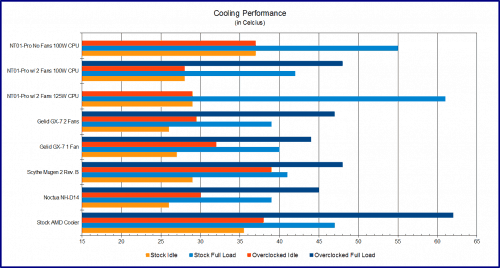 The SilverStone NT01-PRO struggles taming the AMD FX-8350 at stock, but does keep it from power throttling which we would have considered a failure. Unfortunately this is the case in two overclocked full load tests where the CPU throttled back its clock speed and voltage as the temperature went over 65°C. On an up note, with both fans in place the NT01-P did keep the 100W TDP A10-5800K well under the temperature warning range while overclocked.

The NT01-P does very well with the 100W TDP processor, failing only under the most extreme condition of overclocked with no active fans. SilverStone recommends using the passive cooling setup with a 65W TDP processor, but we think this is a very conservative estimate. We think this cooler could passively cool a 77W TDP Intel CPU with no trouble at reasonable ambient temperatures.

I am sorry to say we did not do extensive testing of the acoustic performance for the NT01-PRO. This is because the cooler did not come with any fans which makes its native configuration passive and thus silent. It obviously does not contribute any noise to my test system until I added my own fans.

The fans selected were the best performing PWM fans I could find in 80 mm size we believe someone would purchase. The selection for PWM fans in 80 mm is not common and 70 mm is near non-existent in the market place. We are only aware of one other set of 80mm PWM fans made by Noctua (see our article). I did find another choice with a maximum speed of 4000 RPMs, but it was both very expensive and listed as very noisy. We do not believe these high RPM fans will be selected for the NT01-PRO.

My configuration never got loud enough to consider it noisy. While the twin 80 mm fans were louder than the Noctua NH-D14 or Gelid GX-7, it was not by much. Regardless, this is not due to the cooler itself and your acoustic performance will vary based on the fans you elect to use. 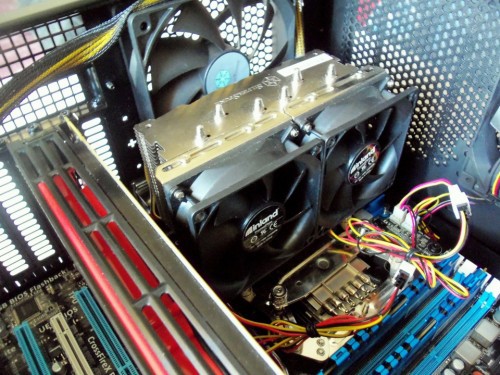 SilverStone has left us with an unusual dilemma with the NT01-PRO being both a sold performing cooler and frustrating to install. Approaching the NT01-P as a CPU cooler for Small Form Factor or HTPC build, it will perform exceptionally well. If paired with a 77W TDP or lower processor I don’t see temperatures rising beyond 50°C in a passive configuration. It is only when you try to push the cooler well beyond the 100W TDP mark where problems begin to occur.

Even with the right setup and well selected CPU to pair with the NT01-P, getting it installed can be very frustrating. I walked away from installing this cooler on several occasion as everything seemed to be out to irritate me. When I wasn’t confused by the manual, I was hunting for retention clips or other small pieces. It was only when I formulated my own method to the install when things got a lot easier.

Previously in the review of the Node 304 I mentioned an issue with mounting direction for Mini-ITX motherboards. The SilverStone NT01-PRO is a solution to this as you can mount it (with AMD) in four different directions. The $54.00 price tag is a bit high especially considering no fans are included, but this is a cooler you need to consider when building in a size restricted chassis.