Get Going with Seagate FreeAgent Go (or USB)

As mentioned earlier, this particular version of the FreeAgent Theater+ did not come with any storage of its own, but there is a more expensive variant that packs in a 500GB external hard drive. I happened to still have the 250GB FreeAgent Go from the original FreeAgent Theater, so I gave that a whirl. 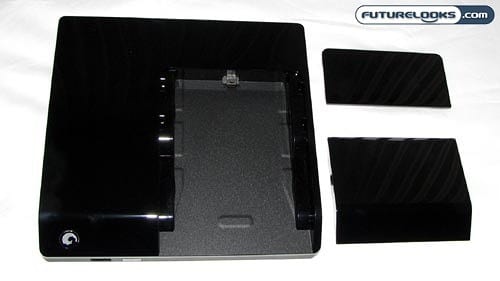 Whereas the previous model left the hard drive dock exposed when not in use, this version comes with a couple of plastic flaps that can be removed and replaced as needed. This helps with maintaining a cleaner overall appearance. The reason why it’s in two pieces is that the back plate can be reattached while the FreeAgent Go is docked. The eject button has also been ditched; you just pull the drive out now.

It’s better, if for aesthetics alone, to use a FreeAgent Go with this device, but there is a USB port in the front for any external storage as well. Feel free to use any flash drive or portable hard drive that you’d like.

Alternatively, the LAN port in the back can connect to your home network. There is no Wi-Fi here, but Seagate says that you can connect a USB Wi-Fi adapter to the port in the back for that functionality. I didn’t have a chance to test this out, so I’ll have to take their word for it.

Check Out the Audio, Video, and Networking Options

Flipping around to the back, you’ll notice that Seagate has made some significant changes to the connectivity options on the “Plus” version of the FreeAgent Theater compared to the original. The component video is still there, but you’ll notice that the composite (yellow) video and S-Video jacks are gone. In their place is HDMI. I’d say that’s a good trade. 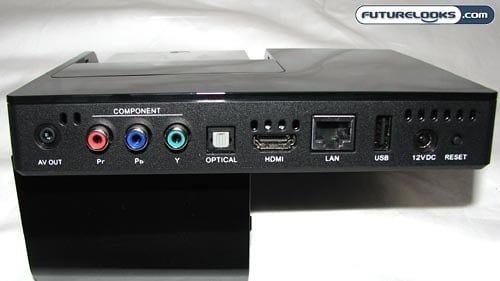 Interestingly, the RCA (red/white) audio jacks are gone too. Instead, there is a new “AV-out” port that accepts a special cable with composite video (replacing the old dedicated port) and RCA audio on the other end. It’s more efficient, sure, but it means you can’t use a regular RCA audio cable here.

The coaxial audio has been replaced with optical audio, which is also a good trade. The aforementioned LAN port is back here too (just like the Asus O! Play HDP-R1), as is the second USB port. I’m thinking most users will prefer the HDMI and optical audio, but the lack of regular red/white jacks for stereo audio is a bit of a downer. 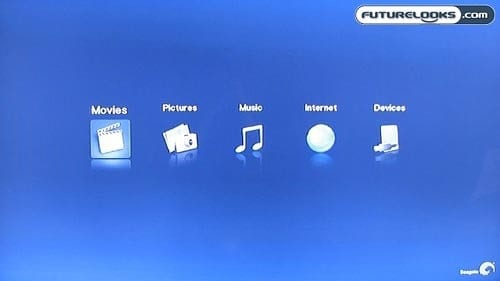 There’s something to be said about the simple and minimalist approach to aesthetics. Some people prefer it when companies clear out all the unnecessary clutter, only showing us the things that we really need. For those people, the main menu on the FreeAgent Theater+ is perfect.

Turning it on, you’ll be shown just five basic icons in a simple horizontal row. These give you access to movies, pictures, music, Internet, and devices. The blue-and-white design scheme is easy on the eyes, but I found it to be too lacking in style for my tastes. Your preferences may vary, of course.

Where do you access the configuration settings? Those are “hidden” away in a top-mounted menu that you can access by hitting the menu button on the remote. This may not be immediately intuitive for people who aren’t quite as tech-savvy, so there may be some issues with user friendliness here. 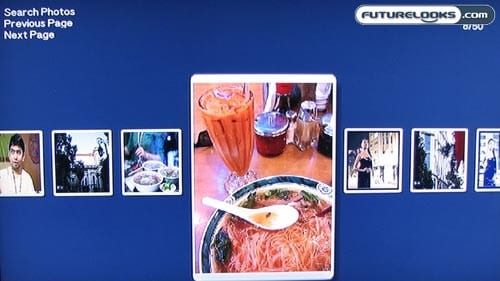 Since the FreeAgent Theater + Media Player can connect to your home network, Seagate figured that it’d grant you access to the Internet too. Unfortunately, this functionality is a little crippled. You won’t be streaming anything from YouTube or Vimeo through this. Instead, you are restricted to Picasa, Weather, Finance, and Flickr.

Even then, the Flickr functionality is quite restricting too. You can search for photos by keyword and navigate through 50 flipping pages of images, but it doesn’t seem like you can access a specific user’s photostream directly. That’s too bad. This online element could have been a huge plus (no pun intended).