Just because you have a printer doesn’t mean that you always have a computer attached to it. That’s why Samsung has decided to include an 80GB hard drive under the hood of the SCX-5935FN. The idea is that you can receive faxes and so forth, storing them on the drive for later access and lowered printing costs.

This does seem like a rather clever idea, but I found the execution to be clunky at best. Fumbling my way through the on-screen menu, I found an area for stored documents. That made sense, but it was not nearly as clear how you go about storing said documents in there.

Similarly, going to the “scan” portion of the menu, it was not immediately obvious how I could go about using the built-in scanner function on this multifunction printer, sending the resulting image or PDF file to the 80GB hard drive. The same could be said about the menu related to an attached USB drive. If Samsung is going to embed a hard drive in a MFP like this, they need to make it much more obvious how you go about putting it to good use.

Instead of forcing you to fumble through a series of cumbersome buttons, Samsung did the great thing of including a seven-inch touchscreen display. This makes it so much easier to make your way through the various menus. 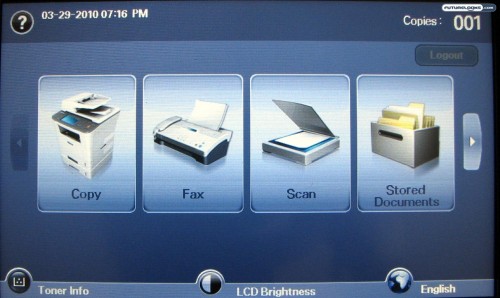 From what I can tell, this is a resistive touchscreen and not a capacitive one like the iPhone or Nexus One. This allows for some greater precision, but it means that it’s not quite as finger-friendly. I’d suggest you use your fingernail when pressing the virtual buttons.

Through the menu, you can set access the copy, fax, and scan features, as well as get to the stored documents, setup menu, toner info, LCD brightness, and more. The network setup is performed through the touchscreen as well. You go to the IP settings and enter the information manually using the (hardware) numeric keypad. Since it uses a static IP, I’d suggest you use one at the upper end of your router’s IP range so that you don’t get any duplication errors. I speak from experience.

To some people, the on-screen user interface can be a little confusing, but that’s because this printer offers a heck of a lot of customization and features. For photocopying, for instance, you have multiple duplex options, reduce/enlarge options, and so on. Getting through some of the setup options can be daunting too, but the default settings are usually sufficient.

One of the nicer features is called cloning. If you have something that you’d like to copy and it’s smaller than a full page, you can create multiple copies of it on each individual sheet. This is good for short forms, coupons, and other instances where a full page for a single copy would be wasteful.

I’ve said before that a good multifunction printer is one of the best items you can have in your home office. It’s a shame that this Samsung MFP is monochrome and not color, but the rest of the features and functions are quite useful.

For instance, it has both a feeder and a flatbed scanner, and the resulting image can be saved to a connected PC, uploaded to an online server somewhere, or sent out as an email right from the printer. The “network-ready” aspect is great and as a result, these functions can be used from any workstation in the office. This is far more versatile than the printer that is plugged into your computer and saves on having to setup multiple printers for each computer separately.