The general feel of the keyboard on the Samsung R780 is similar in some ways to other Samsung portables with a chiclet-like style. This is generally comfortable, but it’s not without its faults. 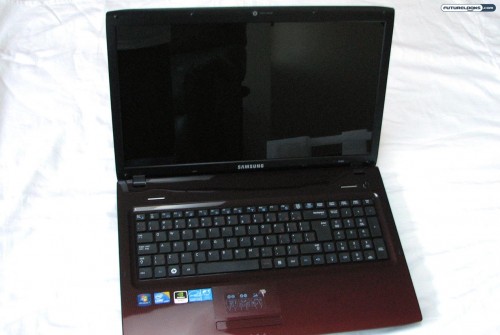 For instance, the placement of the “\” key next to the left shift key resulted in more than a few typos on my part and likewise with the duplicated “\” key next to the main enter key. That was bothersome and I would have preferred a more traditional layout. The numeric keypad has become a mainstay for notebooks this size, so it’s pretty much par for the course to see it included too.

The trackpad has a slightly different, almost “textured” finish to it, offset from the glossy palm rest area. I found it to be reasonably smooth to use and the multi-touch gestures made web browsing a little easier. There are also small blue LEDs that light up the four corners of the trackpad, in case the change in texture wasn’t telling enough. 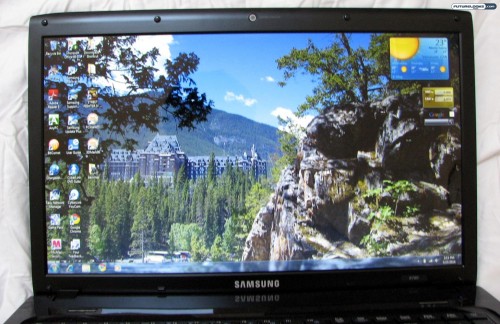 Considering that you are getting a large 17.3-inch display, it should almost be expected that Samsung would include a full HD screen for you. Unfortunately, that’s not the case. Instead of getting 1080p full HD (1920×1080), you get the less desirable 1600×900 resolution. This is “good enough,” I suppose, but it could be better.

You’ll also notice that they went with the ever-popular glossy finish. This generally results in more vibrant colors, which is good for gaming and movies, but it means you get all sorts of reflections in sunlight. I generally prefer matte, but I can understand why Samsung would go with glossy since it does sell the product better. But in all practicality, matte is definitely the way to go and it won’t take you 5 minutes to realize that perhaps you should have gotten the matte option (which isn’t available). 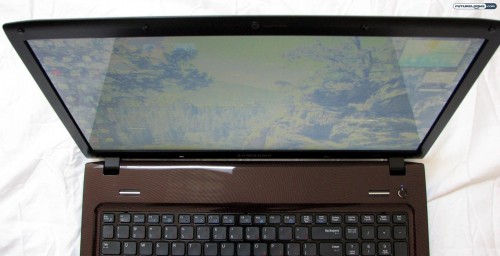 The overall display quality is pretty good with plenty of brightness, lots of contrast, and some super vibrant colors. It’s nothing like a top-end panel, but it’s a nice step above the low-end screens too. Well, that much is true if you are looking dead on center with this display. Both the horizontal and the vertical viewing angles could use some serious improvement. The screen becomes virtually unusable at wider angles, making it not at all effective for sharing with your nearby cubicle-mates.

The “sweet spot” is decidedly small and this is rather unfortunate. It’s also notable that the screen hinge doesn’t fold back all that far — about 120 degrees — so you’ll need to move your head or body to accommodate should the circumstances demand it. Since the size of the screen is so large, you tend to creep up on it quite quickly, which can lead to neck strain if you’re constantly trying to crane to hit the small sweet spot. 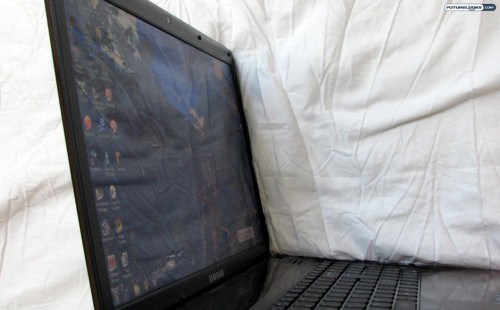 Putting the Samsung R780 through a usual day in the life of a freelance writer, I wasn’t disappointed (aside from the keyboard layout as described above). Watching high-def videos wasn’t an issue and surfing the web with Windows 7 Home Premium (32-bit) was as you’d expect it to be. Yes, this is a 32-bit version of Windows 7 installed, and of course, without the disc, you can’t do anything about that. This makes an upgrade to more memory somewhat pointless and it is rather puzzling that a 4GB equipped machine would not have 64 bit installed to take advantage of all the memory.

Battery life was on the average side: a fairly short 2 hrs while on balanced settings. Of course turning down the brightness on the large screen can increase that number, but with a smaller sweet spot, it’s hard to turn it down that much without suffering the consequences.

Next we’ll step through some benchmarks to give us some reference point as to how the Samsung R780 performs.