To see how the Samsung R780 would perform as a gaming laptop, I used the official Street Fighter IV benchmark from Capcom. Though not the most stressful test, this DX9 title is close to my heart because I love fighting games. 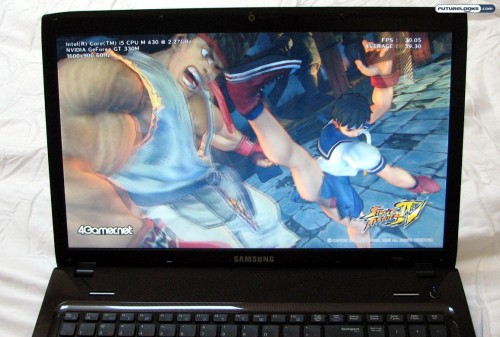 For the first test, I maxed out most of the settings at 1600×900, anti-aliasing on, and most of the detail settings on maximum. This resulted in a rather sluggish experience, an average frame rate of 39.47 fps and a score of 5581 (D). The frame rate sounds okay, but I could see all kinds of delays and lag in the sample gameplay sequence.

To find more playable settings, I kept the native resolution of 1600×900 and tweaked high detail for character models and background, but turned off anti-aliasing and minimized other elements (particle rendering, motion blur, etc.). This resulted in a much better 59.32fps and a score of 9544 (A). From this, I can extrapolate that games on level with Street Fighter IV can be enjoyed with medium-level settings without too much trouble.

Other Benchmark Tests and Scores

The Samsung R780 is not a high-end gaming rig, but it can generally hold its own when it comes to most consumer-level tasks (including some gaming and multimedia editing). Running it through 3DMark06 Professional Edition, the R780 achieved an overall score of 6130, with an SM2.0 score of 2557, HDR/SM3.0 score of 2304, and a CPU score of 2579. This is actually lower than the 8793 3DMarks achieved by the Asus G51Vx gaming notebook we tested last year. This appears to be due to the graphics card rather than the processor. 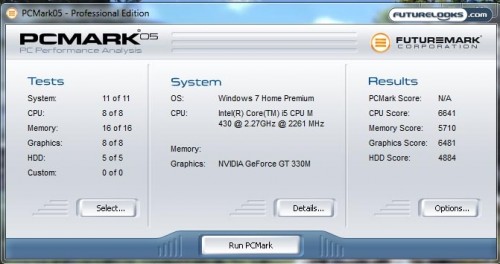 While it wasn’t able to compute an overall score in PCMark05 Professional Edition, the benchmark was able to generate a CPU score of 6641, memory score of 5710, graphics score of 6481, and a HDD score of 4884. Again compared to the Asus G51Vx, we find that the Samsung outperformed it in the processor and memory departments. However, the Asus was able to achieve a graphics score of 11208, which is nearly double that of the Samsung R780.

In HD Tune 2.55, the provided 500GB hard drive had an average transfer rate of 62.3MB/sec with a 33.1MB/sec minimum and 79.4MB/sec maximum. The access time was clocked at 19.1ms with a burst rate of 65.6MB/sec. Definitely a major bottlekneck of the system or any notebook is the hard drive. 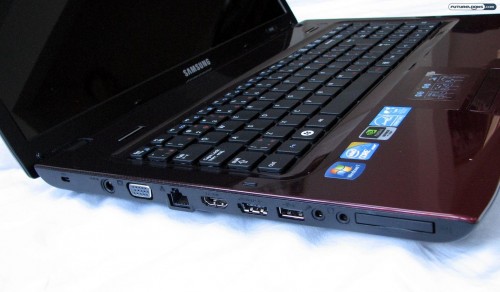 Considering that the Samsung R780 hits that magical sub-$1000 price point, I’d say that it offers a fair bit of value for money. You get a large 17.3-inch LED HD+ display with great vibrant colors and a decent 1600×900 pixel resolution. I would have liked true 1080p and a Blu-ray player, but those may have bumped the price into four figures.

Build quality is generally good and Samsung has once again done a great job with aesthetics. I’m not a fan of some of the keyboard quirks, but that’s something you can get used to over time. The graphics card isn’t the most powerful thing in the world, but you can enjoy most contemporary games on medium-level settings. Plugged into the wall, the 2 hr battery life shouldn’t bother you, but be prepared to share an outlet at the local coffee shop.

In the end, the Samsung R780 represents a pretty good deal if you’re looking for a desktop replacement. That is, if you can find one.