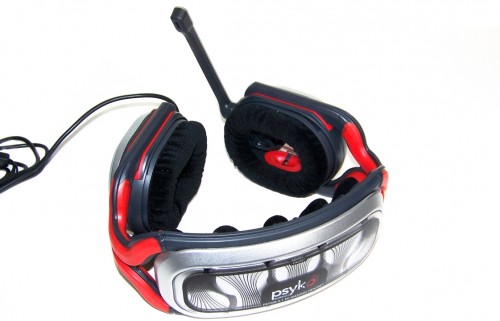 Due to the heavy duty flexible materials it does weight more than normal headsets in a similar price range. Much of the weight is split between the head band and the ear cups and the thick padding and wide head band do a decent job of spreading out the weight over the top of your head. Of course you wouldn’t want to rock out too much or they’ll quickly come flying off.

The ear cups are full sized and do completely cup your ears. When properly positioned, the cups don’t put any pressure on your lobes. They would be the one part that will slide off last if you lean forward and try to shake them off. Otherwise, there’s some movement and flexing in respect to the frame, but not enough to cause issue. A clip would have been handy to tame the extra cable hanging down from the left ear cup.

The color coded audio cables use higher quality materials which makes them quite heavy. These are anchored by the AMP module which weighs enough to anchor the cables down. It wouldn’t be a bad idea for them to include a wire clip just in case the box falls off the desk.

Audio quality can vary based on the audio source and its audio processor. For this reason, I’m comparing the headset to one other headset by thoroughly testing audio quality through three separate audio sources. Here is the test system:

The Creative X-Fi is one of the more prominent gamer audio cards while the BGears b-Enspirer caters more towards theater quality audio and represents a more mainstream solution. The integrated audio was used to prove or disprove any recommendations for using a discrete 5.1 audio card. Our operating system of choice for all tests was of course Windows 7 64 bit Ultimate.

As far as installation, the most complicated thing you’ll have to do is match the color coded cabling from the PC AMP to your computer’s analog audio ports. Consult your sound card user manual if it’s not be color coded, or the symbols aren’t easily understood.

The games of choice for testing were Battlefield Bad Company 2 and Left 4 Dead 2. The computer system was running the X-Fi Titanium using the 2.17.0008 driver while the B-Enspirer Dolby/DTS capable audio card used the latest 10.23.2009 driver.

When wearing the headset, it was interesting that we all needed was a little time to get use to the 5.1 audio whether using the X-Fi audio card or integrated audio.  The reason is that most of our ears are accustomed to typical stereo head sets which may simulate surround audio so our ears need a bit of re-programming of sorts. The Psyko Audio 5.1 brought out so much ambient audio compared to the comparison headset (Tritton AX 51 Pro) that it was very tricky getting used to discerning the localized audio nearest you. But, once you get use to it, it’s pretty freaking epic!

Some audio does escape due to the plastic pivoting ear cup and the loss in mid-range results in a metallic echo (or empty helmet echo) not experienced in the AX 51 Pro. However, adjusting some of the equalizer frequencies and/or automated sound genre settings helped cancel out much of it. Furthermore, covering the pivoting cup wall with some sound dampening material trapped much of the mid-range and deepened the base a bit and others around me could no longer hear escaping audio.

On the other side of the coin, some of that echo actually helped the stronger ambient audio effects stand out in games. Left 4 Dead 2 and Fear all have really creepy audio effects that influence the game experience. I think you’ll be pleasantly surprised with the audio right out of the box for these games. And, if not, just make a few adjustments to set to your preference.