For the launch of Windows 8, our friends over at NCIX created two events to allow the public to touch and feel Microsoft’s latest operating system. The new operating system is radically different than previous versions due to its unique hybridization of both touch screen mobile OS and the conventional mouse and keyboard desktop. That’s why it’s so very important for companies to get their devices out there to show people just what the new OS is really capable of and the level of thought and design that has gone into devices made specifically for the operating system.

Futurelooks was on site at the West Coast event in Richmond, BC Canada, at the Aberdeen Centre Mall where NCIX’s Western Flagship store is located. Check out the video posted above for some of the highlights, then read on for details on some of the more interesting items.

A NEW Direction for ANTEC 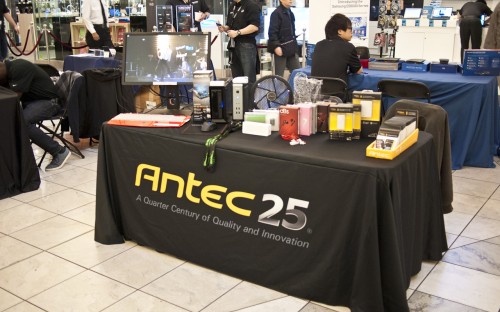 For more than 25 years, ANTEC has been known as the Power Supply and Case company. In the last couple of yers, they’ve started introducing products in new categories including CPU coolers, both liquid and air, and have even made speakers under their Sound Science division. Their latest move is the most surprising: they are making products for smartphones and tablets.

Their new AMP! product line, which stands for “Antec Mobile Products”, provides a wide selection of accessories for smartphone and tablet users which include things like headphones, bluetooth headsets and a series of portable batteries that use very high density Japanese cells to a speakerphone that works as both a speaker for music and as bluetooth hands free device. Most products are under $100 and seem extremely well made. MEGATechNews posted a video about these products in more detail. 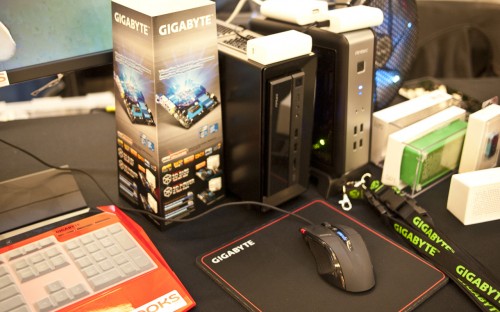 Futurelooks provided two systems to ANTEC to support this new direction. Usually, you’d expect to see one of ANTEC’s much larger full sized enclosures. But this time, we decided to do something a little different by building systems based on the mITX form factor.

The system on the right is built with an ANTEC ISK 300-150 chassis which contains a 150Watt Flex ATX power supply and just enough room for our GIGABYTE Z77N-WiFi mITX motherboard which was graciously donated by GIGABYTE. We slapped a 2x4GB Kingston HyperX Memory Kit in it, an INTEL Core i7 2600K into the LGA1155 socket, and even a discrete AMD HD 5570 graphics card into the vacant PCIe slot. The system had room for two SSDs so shoved a CORSAIR Neutron GTX 240GB one in there too.

The one on the left was something we thought to build to the minimum requirements of Windows 8 just to see if it could still perform. We chose the ISK 100 chassis (which has now been replaced by the VESA mountable ISK 110) to see if could construct a system using an old ZOTAC IONITX ATOM 330 board we had in the closet. Sure enough, the system was quite sprightly with a Kingston HyperX PnP 1866MHz DDR3 8GB SODIMM memory kit and a 750GB Seagate Momentus XT for storage.

Both systems were a hit and we had fun telling people about the possibilities we were pondering with the ISK 300 for an even more powerful build and the virtues of Windows 8 including its much lower system requirements for a positive experience. You can find more photos in our Facebook Gallery and we’ll be doing an article about this build including our planned upgrades very soon. 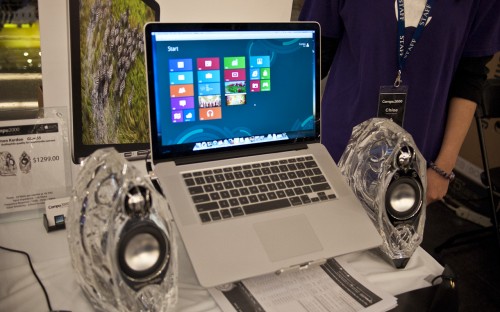 COMPU2000, which is a subsidiary of NCIX if you weren’t aware, was out there showing off their Alienware systems but what was most interesting is what they did to this Macbook Pro. They showed it running Windows 8 using either VMWare or Parallels. I only played with it briefly but with the lowered system requirements of Windows 8, the OS seemed quite quick on the Apple hardware. The only thing that the Macbook Pro lacked was a touch screen, but I guess we’ll see that whenever Apple decided to “reinvent” touch computing on a notebook. 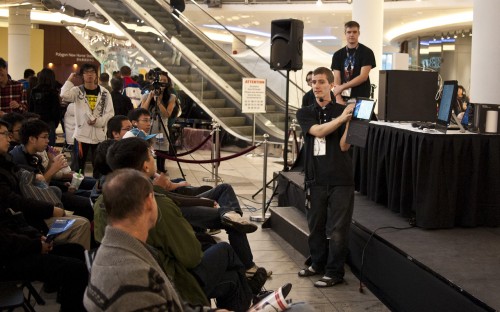 NCIX just isn’t NCIX without Linus. In order to continue the education on Microsoft’s latest OS, they had him up there all day long on stage, showing off something new and cool about the new OS and the hardware that was built for it. But of course, the captive crowds could have been there to win something from the $5000 prize pool as well. Yes, those are socks and sandals. But this is Linus “Tech” tips not Linus “Fashion” tips!

Overall, the event was quite successful for NCIX and it really created a good buzz for the latest Windows 8 OS from Microsoft. All my hovering around all the booths gave me a good idea of just what the public thought of the new OS and how out of touch we reviewers are sometimes with the public when it comes to something just so dramatically new. The public, both young and old, clearly likes the new OS and they are very willing to give it a shot.

Having played with Windows 8 since its official retail launch, I can tell you as an old school user, it did require a few days to get used to it. But that inconvenience was far outweighed by all the cool things that the new OS does and the increased snappiness thanks to the speed tweaks baked in. I have found ways to deal with some of the things I just can’t get over (like the lack of the start button) so hopefully I can share my tips with you soon.

For more on the notebooks and tablets and all in one machines, you should definitely check out the video I helped MEGATechNews out with where I go through all of that. Enjoy the gallery photos.