CDM uses intense compression tests to benchmark storage devices. While it’s not a favorite among all engineers, it does quite well in providing scores that reflect real world transfer rates as well as hints to desktop performance expectations. 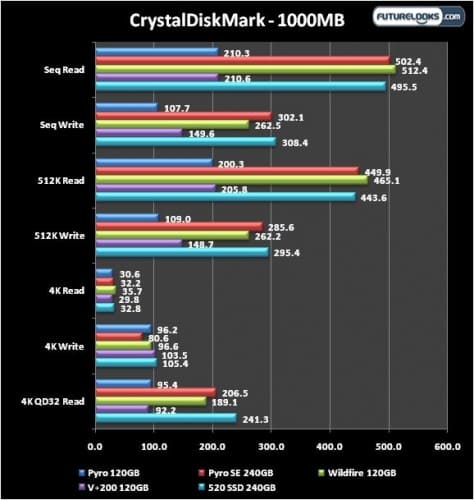 Here, the controllers get slapped around pretty hard under all that compression. What this does is show us a little about what we can expect with the SSDs in our desktop. Often, the 4K performance makes all the difference.

Any SSD affects the system differently and PCMark7 shows tangible differences between them. Sequential read and write performance doesn’t improve system performance nearly as much as the smaller 4K data block capability through the controller. 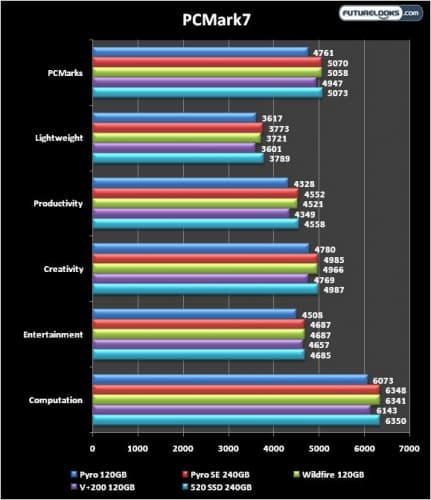 These are the average scores with the OS and other programs loaded on to each SSD. The only variable here is the SSD. Firmware and NAND show us that the Pyro SE is just about as strong a performer as its Wildfire champion brother. Either way, the Pyro SE will be a great SSD for your big programs.

For a little IO action, ATTO Disk Benchmark is still one of the more popular free to download programs to use. My best 10K RPM platter based hard drive has trouble producing over half the performance of even the slowest SSD. Keep in mind your particular system performance will vary from chipset to chipset. 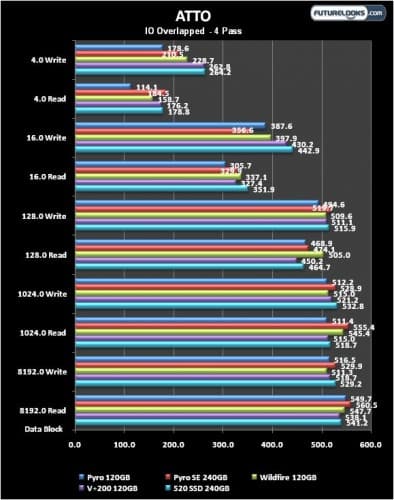 A Western Digital Raptor drive produces about 110 MB/s write 4K datablock IOPs. Even the more affordable asynchronous Pyro SSD scores 178MB/s in the same test. As for the rest of the synchronous bunch, they’re noticeably quicker. 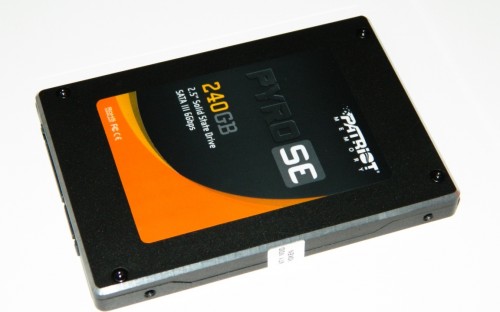 The top end Wildfire is still the fastest SSD that Patriot offers but it carries a rather lofty price tag to match. Ultimately, the goal of the Pyro SE seems to be aimed at offering enthusiasts a high performance option without the high end price tag. Ultimately, performance is very close to the Synchronous SSD competition if not just edging past. The Pyro SE’s only weakness is its bundle as it doesn’t come with any anything. Some hard drive bay mounting adapters would at least make sure it fits in any enclosure or system out there regardless of its age.

The price of the Pyro SE starts at $120 for the 60GB model. However, for $160, you can get a 120GB which is really recommended if you don’t want to have to watch your capacity. The Pyro SE 240GB for $350 will accommodate your important programs and big games. Plus,  both of which will definitely run far more efficiently. Professionals will get through their work faster and gamers can load their games faster. Being one of the first join a Battlefield 3 server has its pleasing benefits. No more being the last to choose the aircraft or vehicles.

Because the Patriot Memory Pyro SE 240GB SSD performed and executed its purpose quite well, I have no reservations giving it our Recommended award.

Help Us Improve Our Reviews By Leaving A Comment Below