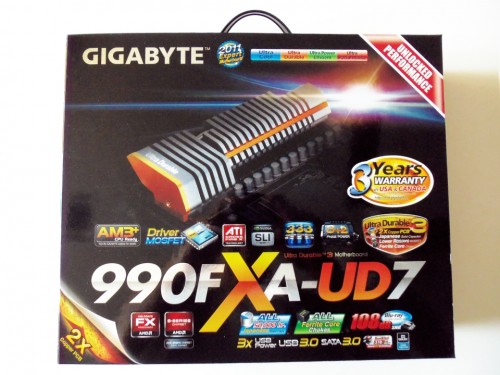 One factor in every component purchase decision is the budget. Components on your wishlist are always in flux, as you decide which can be downgraded to save money and which can’t. My Electronic Circuits professor’s favorite answer to a question about component selection is always “it depends”. I personally downgrade my choice in power supply and motherboard as a last resort when I have to get a PC under a restrictive budget. If you need proof of my rule of thumb I will be happy demonstrate with the GIGABYTE GA-990FXA-UD7. This time we truly saved the best for last. 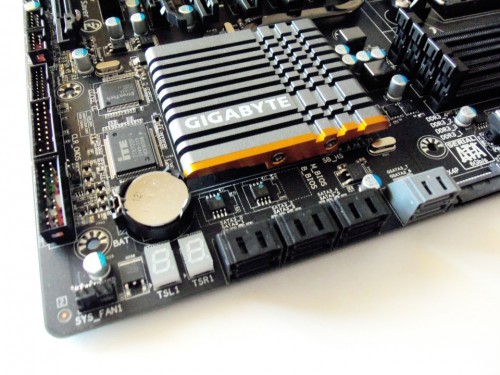 There is not much difference here from the previously reviewed GA-990FXA-UD3 and GA-990FXA-UD5 boards as all three boards are in GIGABYTE’s FX lineup. They are by definition of GIGABYTE naming nomenclature, the best product line they offer for AMD. Since this is the third time we’ll be looking at a board from the company’s FX line up, I’ll refrain from going through all of GIGABYTE’s great features such as DualBIOS, Hybrid EFI Technology, On/Off Charge and USB 3.0 Support. Instead, I will just concentrate on what is unique to the 990FXA-UD7.

The key feature differences on the UD7 are the luxury items, some of which may make overall usability easier. On the motherboard itself you find two led number pads. During the POST (Power-On Self-Test), these two panels follow the POST routine and stop if there is an error. The normal operations code is “FF” as it is coded in hexadecimal. If your PC does not start, you can simply look at the code and check your manual for the exact reason why there was a failure. This can literally save hours in troubleshooting, but I will get back to this during installation. 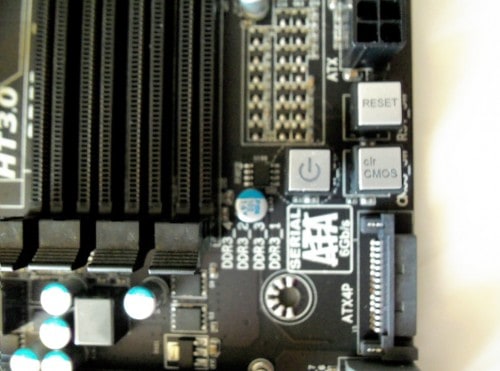 The second feature you can see on the GA-990FXA-UD7 is the Onboard Quick Switches. They are simply Power, Reset, and Clear CMOS buttons built into the board itself but they serve so many purposes. The first is they all glow blue when there is power through the board. A quick glance and you can tell if your PSU is plugged in and is turned ON. You can also power on your system without connecting the front I/O panel on your case. This is a quick way to test if you have the front I/O connected properly. Finally, the feature I think should be on every motherboard, is the ability to reset CMOS back to default with the press of a button. No tiny jumpers to lose and no battery to remove in order to accomplish this operation.

You can also see the difference of the UD7 on the back I/O panel. As you know from the GA-990FXA-UD3 review the rear I/O for it and the 990FXA-UD5 are identical. On the 990FXA-UD7 there is the addition of a coaxial S/PDIF Out connector to improve connectivity with older audio systems in a home theater environment. Side by side you would think there was one less USB port, but the UD7 also has a eSATA/USB Combo connector in replace of the two eSATA ports you find on its counterparts. 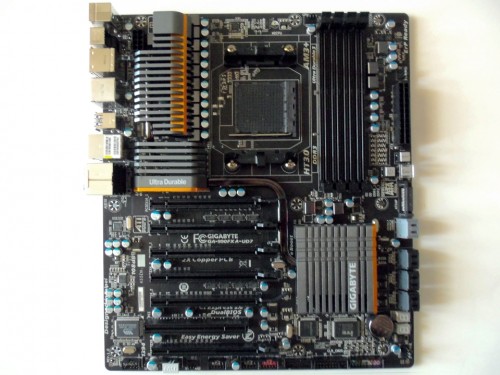 The last feature the UD7 has over its two counterparts is the layout of the expansion slots. On the UD7 you will find a single PCI slot and six PCIe x16 slots. Two of these slots run at full x16 speed, two at x8 speed, and two at x4 speed with all conforming to PCIe 2.0 standards. What this means for you as the end user is up to 4-way Crossfire or 4-way SLI support. For additional power to the PCIe connectors you can also find the ATX4P connector as a front facing SATA plug just above the two addition SATA ports (8 internal SATA 3 ports in total). This keeps you from needing to use a molex connector in an awkward position when your board needs the extra power.

Of course, the other major difference between the flagship UD7 and it’s other brothers is the price. The GA-990FXA-UD7 has a retail price of $249.99 as of the writing of this article and it’s up to us to find out if it’s worth it. 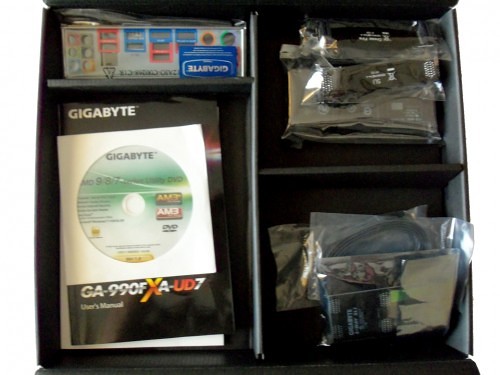 The GIGABYTE GA-990FXA-UD7 also likes to arrive in style with a unique design to the box compared to the UD5 and UD3. The box has a flip open window that allows you get a glimpse of the motherboard prior to opening it. Once you remove the outer shell and get to the inner box, you will find the plastic screen you were looking through was actually apart of this box. I also could clearly see the box was the same length and width, but was at least 1/2 an inch talker. This is very similar to the treatment of the the similarly flagship GA-890FXA-UD7 reviewed many moons ago.

Once you get to the motherboard you will find the GA-990FXA-UD7 in its own box with an anti-static foam bed. This is how they can protect the board and show it off at the same time. All of your other items can all be found below the motherboard in there own compartmental box. This includes the user’s manual, quick installation guide, four completely black SATA 3.0 cables, rear I/O shield, two Crossfire bridges, one 2-way SLI connector, one 3-way SLI connector, and one 4-way SLI connector.

The content of the package is great as it provides anything you would need for any possible configuration.  While all Crossfire capable AMD video cards come with one bridge, I was glad to see they include two extra. I would personal liked to see six SATA cables instead of just four. I also enjoy the fact all the accessories are completely black which helps to maintain your rigs color scheme if you have a side window.  As we figured out from a previous article, the included DVD and manuals also add a lot of value to the bundle.