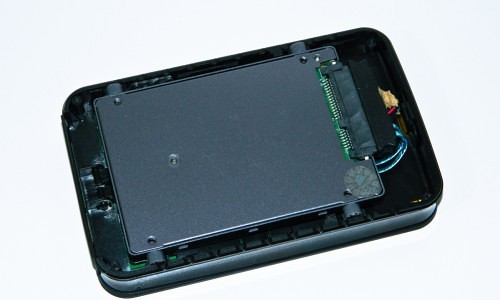 Since the Node 320 already has a platter drive, we don’t have to do anything other than charge the unit. The regular Node simply needs a storage device. I selected a Corsair Neutron GTX 240GB SSD, opened the Node via four screws, added the four corner bumpers to the SSD which sit on four notches, connected the cable to the SSD inside, and replaced the cover.

Unfortunately, the Neutron GTX SSD wouldn’t communicate properly with the Node, most likely due to the newish LAMD controller. It was replaced with a Kingston 120GB V+200 which uses a Sandforce controller, and worked properly once installed. We’re not sure if Patriot will release a firmware with support for the LAMD controller, but there are enough Sandforce based SSD drives out there that you shouldn’t have issues finding a drive in a capacity and price that will satisfy your needs. This includes Patriot’s own line of SSDs. 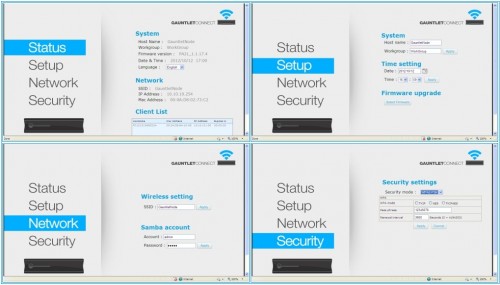 The Nodes have a built in GUI that can be setup through your laptop, smartphone, or tablet via a browser window. The default gateway IP is 10.10.10.254 and the device name GauntletNode . Wireless setup should be easy on XP and Windows 7 as well as any of the smartphone OSes with a good browser.

On the PC, to get explorer to default to the node, type in “\\10.10.10.254” in the Start > Search (Win7) or Run (WinXP) line which should prompt for a login and password. Unfortunately, you will have to manually map the Node(s) by right clicking and selecting the option. (Note: It may be necessary to restart the device and/or computer.)

As for Android and iOS devices, I simply made sure the Nodes were broadcasting before installing the Gauntlet Connect app. Some Android and iPhone friends all successfully connected as long as their phones were set up properly. However, we did encounter a couple iPod issues where the app wouldn’t run but could see the Node broadcast.

Overall, the whole experience is fairly basic and when compared with natural competitors like the Kingston Wi-Drive and the Seagate GoFlex Satellite, it just seems to fall a bit short.

The ideal test setting for the Nodes is to surround the unit in close proximity with several users. Devices with and without wireless N support were used to test bandwidth to give it a real world access scenario. After all, this device allows you to share, not hoard. Keep in mind that WiFi capabilities and features will vary and affect performance. 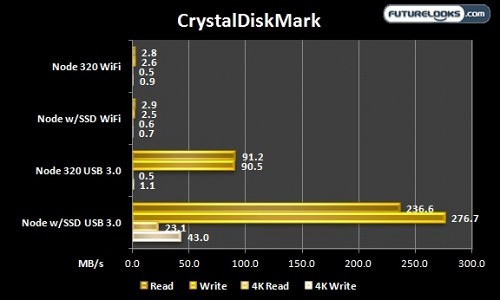 Both Gauntlet Nodes performed differently according to the storage drives inside. The SSD will always easily be faster than any platter drive thanks to its fast access times and higher throughput. Naturally, the USB 3.0 interface moves far more bandwidth than over wireless when connected directly to your c0mputer, which is most useful when moving files onto the device.

There’s enough wireless bandwidth for good quality 720p video but not quite enough for over three clients. Like many devices, standard 1080p videos weren’t very smooth simply because there’s not enough bandwidth, and there are limitations on the devices themselves in terms of the processing power required to play such large files. Audio .mp3 doesn’t require a lot of bandwidth and allowed five clients. F

Finally, battery life was evaluated, and if you’re streaming or consistently moving data, the battery lasted 2 hours 32 minutes which is no where close to the “up to” 5.5 hours. If left alone, the Nodes lasted about 5 hours in standby. This is somewhat disappointing as we’d want a device like this to at least keep up with our smartphones or tablets.

Mobile users expect quick and simple set up no matter the device. They also expect a device to keep up with them all day long. The Gauntlet Node is a solid WiFi storage device but isn’t exactly quick to set up or without its flaws. Windows based systems require a little patience to setup and possibly more detailed directions in the box, while Android and iOS users will find it easier and faster to manage thanks to the Gauntlet Connect app available from their respective app stores. While the regular smartphones and tablets had the best results, the poor iPods we tested wouldn’t run the app. Dare we say it, but could this be the result of “fragmentation”?

Once set up, it works fine as a WiFi Network Attached Storage (NAS) device, but falls short when compared to competitors that offer far more polished interfaces and better battery life. But it does get the basics down with the ability to view Excel, Word, PDFs, and JPEGs. It doesn’t offer integrated media apps of its own so your mobile devices will need the right apps pre-installed and the battery life is slightly disappointing, offering only 2.5 hours. That isn’t enough to keep up with the most power hungry smartphone or tablet so you will need to keep the USB and/or power cords close by for those really long sessions.

Ultimately, the Gauntlet Node is mobile but not the fastest device to set up and its battery life holds it back. Experienced users will figure it out quicker than most but when you target the mobile market, you really have to think of the lowest common denominator first.

The Node can be found for $99.99 and Node 320 for $179.99 US/CA and does provide another option for on-the-go file storage, but clearly has some work to do to catch up with some of the competition out there already. However, the DIY nature of the DIY version does make it stand out somewhat. Hopefully software revisions will continue to develop its capabilities.