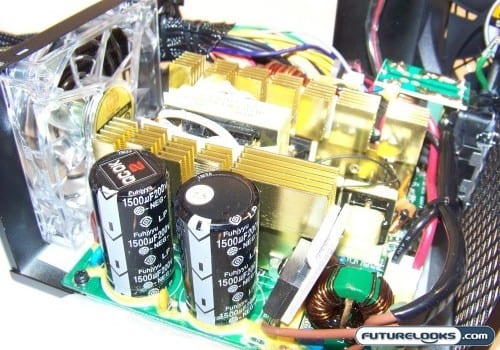 A PSUs constant power results from two important components: Switches and capacitors. The PP800 has two large 1500 uF 200 V capacitors made by Fuhjyyu. This particular capacitor has had some issues in the past with other PSU brands. However, it was evident that very poor cooling was quite likely the culprit and it’s clear that based on NZXT’s careful design, this is something that is a non issue with this unit. 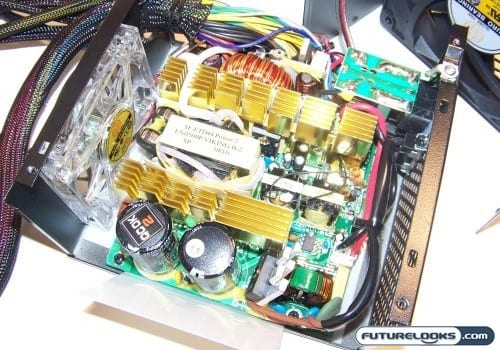 Considering the amount of cooling here and the capacitor improvements, there shouldn’t be any problems completing the task ahead. If it’s half as good as it appears, perhaps it’ll surprise the cautious skeptic within.

Setting Up The Performance Power 800 For Punishment 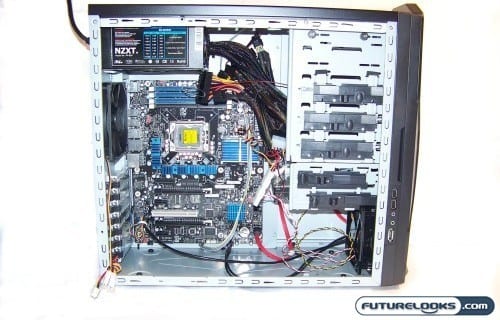 Standard operating procedure for basic testing of a power supply entails using a decent test system to validate +3.3V, +5V, and +12V rail performance. The PSU should offer a good, or acceptable level of voltage at idle and system load. Any large voltage fluctuations or drops can cause problems over time if not immediately so.

In order to give the tests some real world relevancy, we assembled a test system using the following components and give a good representation of the mid to high end range of most systems on the market:

First, the system was allowed to idle for at least 2 hours. (It gets very boring during this time, so I played a few rounds of BF2 on another system.) At the 2 hour mark, all the rail voltages were checked and recorded.

Next, the system was put under full system load with Prime95, Orthos, and anything else to push the HyperThreaded 8 cores to full load. Again, voltages were measured and recorded. Finally, the PSU was loaded to a 100% of its rated wattage. We did find that the PP800 maxed out at about 815 Watts worth of reliable power which is a bonus compared to its claimed 800 watts. 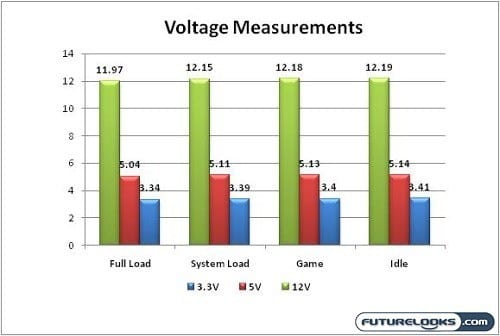 The results paint a good picture based on the PP800’s performance. Voltages are quite acceptable and voltage fluctuations are kept to a .05 Volt maximum up to about 75% load. The +12V was the only rail to drop below an even 12.00 Volt reading. Granted, it was only at 11.97 Volts which is still within acceptable tolerances for any computer system.

How Efficient is the PP800?

What was the efficiency observed in testing? An efficiency average of 79% was observed up to 60% load. Above this, the PSU was 77% efficient. This measurement was obtained comparing voltage drawn from the wall to wattage produced. All in all, not bad compared to NZXT’s claimed 78% efficiency.

The NZXT Performance Power (PP800) 800 Watt Power Supply isn’t quite an 80 Plus club member, but it isn’t very far off. In order to be 80 Plus Certified, it needs to be at least 80+% efficient at 50% load. Often, many power supplies are above this, but don’t subscribe to the standard which isn’t the end of the world. It just means it can be transferred over to cost savings, allowing you to pick up a very efficient power supply at a great price. 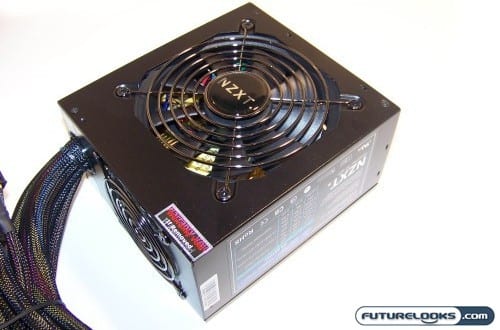 The value that the PP800 provides is quite substantial as it can be as much as $40 cheaper than many other 80 Plus Certified units. That’s a lot for those on a budget who are looking for an inexpensive alternative. However, there are a couple other mainstream vendors that offer modular 800 Watt PSU that are quite comparable, though not as aesthetic pleasing as the PP800. Take your pick.

What NZXT has provided in the end is a worthy alternative for people who want to spend what they can afford and get a lot of value in return. This unit withstood very sensitive tests including the dreaded scope and survived. It’s nice to be surprised once in a while. If you have a choice between some no-name, modular cable special or the NZXT Performance Power PP800, go with NZXT. You’ll thank yourself down the road when your system is still running strong.

Discuss this Review in the Futurelooks Community Forums