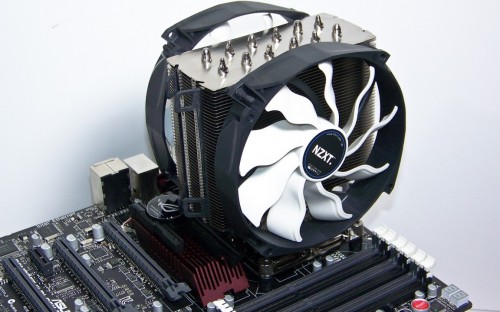 The installation directions are pretty easy to understand thanks to more pictorals than type. The smaller components were easy to spot amongst the pile of parts and were bagged and labelled for convenience. For Intel processors, a four point back plate, bolts, spacers and two top brackets with thumb screws secure the base mounts. A bracket secures the cooler in place via two thumb hard mounted thumbscrews. This brings me to a couple good points.

The mounting method allows the HAVIK 140 to twist left and right. However, it doesn’t tilt or move too far. While this is of little concern to end users, it may concern system integrators who typically like for point (corner) mounts to negate any damage during shipping. We’ve all seen the Fedex and UPS videos, so you know it happens. It’s the best method for securing any CPU cooler theses days.

It would be our recommendation that a 4-point top securing bracket be adopted to increase stability under movement. Given the design of the base, it would be quite easy. It’s good advice given that the HAVIK 140 weighs 1035 grams which is par for the extreme CPU cooler course.

With the cooler installed, it’s time to begin the torture tests!

OCCT ran for four hours and idle for two hours to allow the thermal paste to settle. After confirming the room’s ambient temp of 21C, the system was pounded again for 90 minutes. Average temps were recorded using HWMonitor and ASUS AI Suite II. 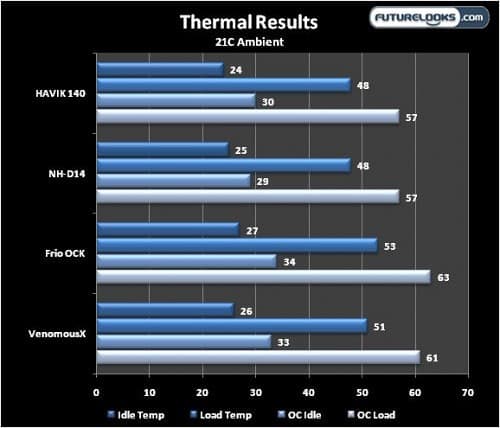 Despite the fact that the HAVIK 140 is roughly half the size of the NH-D14, it still came very close pretty much making it a tie. The impressive thing about these two coolers is that they kept the 4.1GHz overclocked Core i7-980X just below 60 C which is an impressive feat. Did they kick up a lot of fan noise in the process? Let’s check.

Noise was measured from 36 inches away to represent the typical distance from the coolers. Keep in mind that any cooler will be much quieter inside decent computer enclosures in contrast to the tech stations I use. Since the X doesn’t come with a standardized pair of 120mm fans, we are using two 2,000 RPM Thermalright TR-TBD-2000 fans. 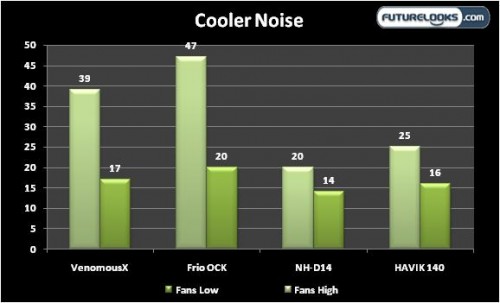 The NH-D14 and HAVIK 140 are the quietest of the group. However, the NH-D14 is just a bit quieter at full load than the HAVIK 140 was actually . The Frio OCK and VenomousX get pretty loud with equal spec’d fans at 48 dBA. In defense of the Venemous X, a fan controller would keep its fans a bit quieter. 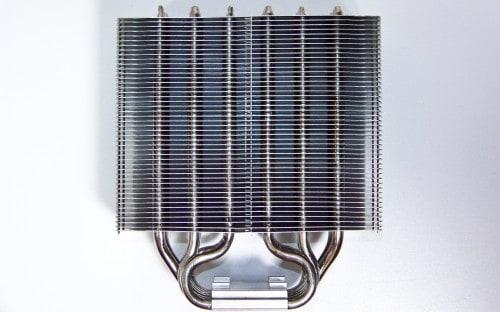 From inception to execution, the HAVIK 140 is an extremely impressive first CPU cooler for the company, and immediately found a follow up: the HAVIK 120 (review coming soon). Performance is very good mainly due to some very important design key features. The copper base has a convex shape which ensure maximum pressure on the CPU aluminum IHS. Heat gets transferred to the six heat pipes which carry the bulk of the heat up away from the base. The magical cooling materials inside the pipes are just icing on the cake. That brings us to the mounting components.

The 2-point securing bracket works relatively well for the design. However, it’s not the most secure and does allow for some slight twisting depending on how much you tighten the bracket. System integrators like very secure mounts or at least mounts that are highly resilient to the “drop ship” couriers. If the securing bracket attached at four points, it would definitely make us feel better about letting our favourite couriers use them for soccer practice. I’m sure this would make companies that do custom systems happier as well.

From the choice in quiet 140mm cooling fans to the unique rubber strap mount system, the NZXT HAVIK 140 is definitely an attractive high performance CPU cooler. The cooler has dropped in price since its launch and can be found for as little as $59.99 US/CA from many online retailers. This cooler is worth every cent!