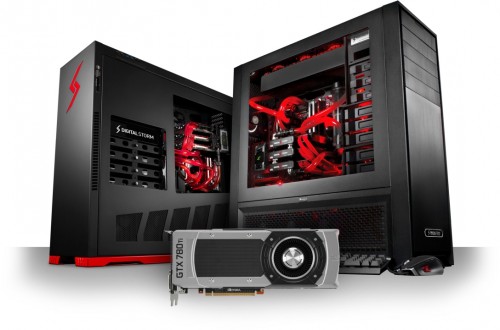 It’s Nvidia’s turn to respond to AMD’s latest release of graphics cards. While many of their releases were less than impressive, the R9 290X sparked some interest from enthusiasts by performing on par with the NVIDIA”s top end Titan at half the price. And NVIDIA responded with not only price cuts to many of their GPUs including the GTX 780, but they also released a card so powerful that it meets or exceeds the performance of their own Titan. That card is the GeForce GTX 780 Ti (check out our review) and if you’re shopping for a new pre-built system, Digital Storm is the official launch partner.

I know there are people out there who want a powerful gaming PC, but don’t have the time to build, test, and validate for both performance and stability. So that’s why for gamers and power users, Digital Storm offers their award-winning Aventum II and Hailstorm II with the Nvidia GTX 780 Ti, effective immediately. Digital Storm also uses top-tier CPUs, custom liquid cooling, and a rigorous 72 stress test to ensure every system they build is the best that it can be. I know that a lot of us put similar care into our own builds so it’s good to see that from a system builder as well.

To meet most budgets, Digital Storm offers a number of options to fit your budget and needs. So if you need a GTX 780 Ti, then they’ll be able to help you customize something with one onboard. Check out the press release below for more information.

“We (Digital Storm) are excited to be part of the 4K gaming movement and partner with NVIDIA for this ground breaking launch,” said Rajeev Kuruppu, Digital Storm’s Director of Product Development. “PC Gaming is leaving consoles in the dust with the aid of exceptional components like the new GTX 780 Ti.”

Crafted exclusively from steel and copper, Digital Storm does not use any plastic in the construction of Aventum II. The system’s exotic nickel-plated copper piping solution was inspired by high-end automotive cooling systems and is handcrafted, ensuring no two Aventum II’s are identical. Combined with three huge 420 mm radiators, the liquid cooling system is as efficient as it is beautiful and fully capable of unlocking the maximum performance potential of bleeding edge components like the GTX 780 Ti.

Enthusiasts looking to quench their thirst for a benchmark crushing components and bone chilling liquid cooling need look no further than the Digital Storm Hailstorm II. With space for up to four radiators (ranging from 140 mm to 480 mm sizes) and a quadruple GPU and dual CPU configuration, enthusiasts can achieve the ultimate level of performance and customization by pairing Hailstorm II with NVIDIA’s flagship graphics card.

All Digital Storm systems undergo a rigorous 72 hour stress. After passing the stress testing, desktops then go through a multi-point QA inspection where every aspect of the system is scrutinized, from part fitments to software setup, to make sure each unit is perfect.