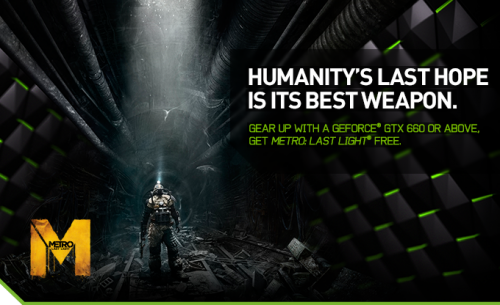 It has always been a practice to pair graphics cards with games to increase sales. Recently, AMD has taken this to a new level, bundling up to two or three games with every $200+ graphics card. In fact, they’ve started doing this with APU product too. Not to be outdone, Nvidia started striking back with similar offers, starting with gift cards for use with some of the most popular free to play games. But with the launch of “Metro: Last Light”, Nvidia is hoping this triple A title will be even more enticing.

At $200 currently, the GeForce GTX 660 is a great gaming GPU on its own. Now paired with a free pre-order copy of one of the more highly anticipated titles of this year, the deal is just killer. And the best part is that this offer applies to any Nvidia GeForce GTX 660 or better GPU.

These bundling offers should only get better as competition heats up with Nvidia and rival AMD. May the best bundle win. Full press release and details below.

Rangers Gear Up For Duty; Metro: Last Light now available with GeForce GTX 660 And Above.

SANTA CLARA, Calif.—April 16, 2013—NVIDIA today announced that gamers who purchase a NVIDIA GeForce GTX 660 or above would also receive a copy of the highly anticipated Metro: Last Light, published by Deep Silver and is the sequel to the multi award-winning Metro 2033. Metro: Last Light will be available May 14, 2013 within the US and May 17, 2013 across Europe.

“We are very proud of this cooperation with NVIDIA, as this is a great opportunity to pool our strengths,” said Menno van der Bil, International Commercial Director, Deep Silver. “Metro: Last Light stands out with brilliant graphics, and the NVIDIA GeForce GTX 600 Series is well prepared to display them in the best way possible.”

“With Metro 2033, 4A Games already proved that we have the expertise to create exceptional computer games. With Metro: Last Light, we are pushing the limits to an even higher level,” said Dean Sharpe, Executive Producer for Metro: Last Light. “We are delighted that NVIDIA has chosen us as a partner, as this verifies the game’s position as a graphics benchmark for the next generation.”

Packed with cutting-edge technologies integrated into the NVIDIA Kepler™ architecture – including DirectX 11 tessellation, NVIDIA PhysX®, NVIDIA Adaptive Vsync, and 3D Vision® Surround™ – only GeForce GTX GPUs, from the GTX TITAN to the GTX 660, will ensure gamers have the most immersive gaming experience possible.

Metro: Last Light is a first person shooter and the highly anticipated sequel to the extraordinary Metro 2033. In the year 2034, a nuclear war has turned the world into a post-apocalyptic wasteland. In Moscow, the tunnels of the Metro have become a new home for the former inhabitants of the city. Within the catacombs, they fight for their survival, fending off hordes of hideous mutants born from the toxic atmosphere, as well as other factions desperate to take control of what little hospitable land remains. As they fight, they also search for a doomsday device that could be the key to their victory. A civil war is inevitable. During these dark hours, the players will embody Artyom, and become the last light for all of mankind.

The plot of Metro: Last Light was written by Dmitry Glukhovsky, acclaimed author of the novel Metro 2033 which inspired the creation of both video games. Also, Glukhovsky is responsible for all dialogues in Metro: Last Light. Glukhovsky’s novels Metro 2033 and Metro 2034 have sold more than 2.000.000 copies worldwide. In 2013, his latest book Metro 2035 will be also available outside of Russia. The film rights for Metro 2033 were bought by Metro-Goldwyn-Mayer (MGM), the movie is currently in development.