Some of you might have heard that AMD just had a 3 hour press event to show off their next generation of RADEON graphics cards. If you are like me, finding 3 hours to sit down and watch anything is hard to do. So we decided to save you some time and highlight the three things you need to know about the NEW AMD Radeon R7 and R9 series of GPUS.

First off, let’s tell you about the hardware. The naming scheme has changed, but it is simple to read. For example the AMD Radeon R9 290X is an R9 series segment put it in the top-tier. The ‘2’ is the generation and the “90” is the performance rank within the series segment. The ‘X’ brand will be much like the Nvidia “Ti” moniker and denote better performance from the same GPU core. 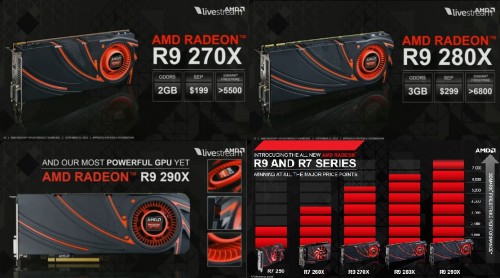 The AMD Radeon R9 290 and R9 290X are the only truly new pieces of hardware being released at this time. The other cards are AMD 7000 series cards retooled for higher clock speed and have support for new AMD technologies. The AMD Radeon R9 270X will be priced for the sweetspot gamers target market at $199 USD with the R9 280X in the $299 US price point if you want a bit more performance. It’s basically your AMD 7950 and 7970 GHz edition respectively, but with the aforementioned tweaks.

The R9 290X is designed to take on the Nvidia Titan and AMD claims “it should out perform anything our competition has right now….” The rumor mill claims that the R9 290X will come it at around $599 which is $400 cheaper than the Nvidia Titan. If AMD’s claims are true, and these do seem to be more than rumors, then Nvidia may have to rethink its pricing strategy fast in order to compete this holiday season. 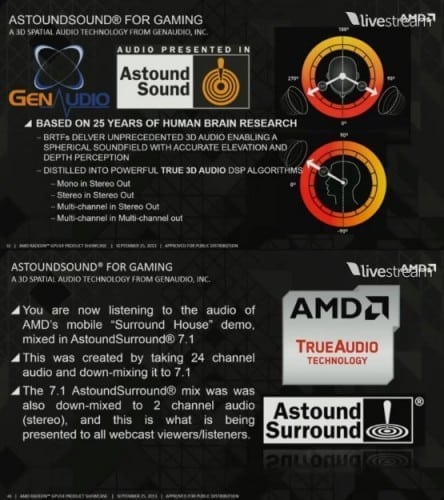 Next is the new AMD TrueAudio Technology with fully programmable audio pipelines. This technology puts the audio processing of your games into the hands of the developers and eliminates the need to rely on a 3rd party hardware/codec. I am not sure how big of an impact this will have as other limitations come into play with audio such as speaker systems, headphones, motherboard support, etc. At the very least it will minimizes CPU overhead and perhaps other resources at most. 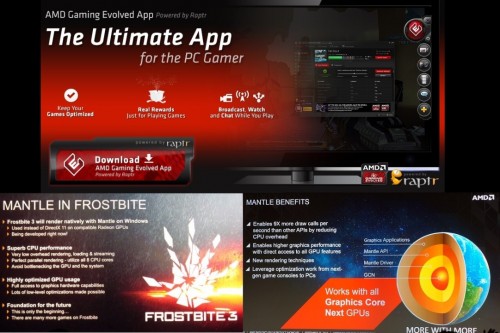 The final piece to this puzzle is the support for games with Raptr and AMD Mantle API. Raptr will be available immediately and work just like the GeForce Experience to tune graphical settings based on system hardware with one button. AMD Mantle API allows game developers to “speak the same language” as the AMD GCN architecture. This direct access minimizes CPU overhead and allows for better utilization of resources.

The example used during the AMD live stream was Battlefield 4 which is optimized for AMD’s technology. It will be native 64-bit (a gaming first), utilize up to 8 CPU cores, enable up to 9 times more draw calls per second, and limit CPU bottleneck issues.

AMD clearly has a goal in mind for the near future and is pushing toward it. Holding the rights to the two major next generation consoles puts them in a great position to gain some position back from NVIDIA on two fronts. For once, I honestly think that AMD may have the market advantage and needs to exploit it for all its worth.

If you are interested in watching the entire live event , you can grab a coffee and start watching it below…

Watch live streaming video from amdlivestream at livestream.com
Share This With The World!