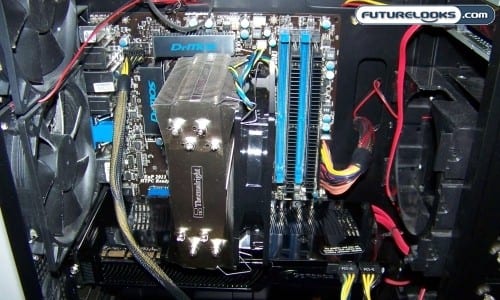 Working with the H55-GD65 is a lot like working with the P55-GD65. We opted to use the new Clarkdale Core i5 661 Processor since the platform supports it. The only two extra steps in the installation were the need for the JMicron 363 driver and the video driver for the i5 661’s IGP. Naturally, any basic drivers are on the disk to get you started.

The great thing about this platform is that everything installed quickly and properly in Windows 7. If there is a glitch somewhere in this matrix, we couldn’t find it.

Here’s what our test system will look like for our battery of tests:

Our test barrage will include PCMark Vantage, 3DMark Vantage, SANDRA CPU, Cinebench R10, Crysis, Heaven Demo, and RightMark Audio. Intel Turbo was enabled, except during overclocking. We’ll also take a look at overclocking using the OC Genie and compare it to our efforts through the BIOS.

You bet your old school 16MB video card we gave overclocking a shot! The BIOS pages are arranged in such a way that it’s easy to set up the system by feature. When it comes to overclocking, there’s a single M-Cell page that gives you every feature associated with this dark art whether it be voltages or frequencies. Just remember to turn off Intel Turbo for best results.

Media chipset or not, we were able to push the Core i5 661 to about 4.4GHz using 1.32 volts CPU VCore. The VTT was also increased to 1.28 volts which afforded the extra stability needed. 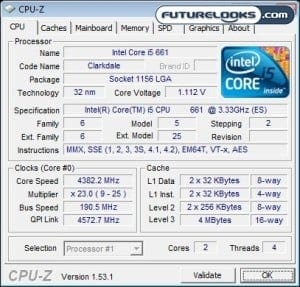 The maximum CPU Bus Clock the motherboard could maintain was 190. However, getting to a 180 CPU Bclk was  much easier and didn’t require a great deal of voltage tweaks. Either way, the platform seems to push the sample Core i5 661 to its max settings.

Using the OC Genie feature, the platform topped out at a 160 CPU Bclk which is happened to be the same XMP Profile setting using the 1600MHz Dominator memory. That’s still 4GHz for the novice who never has to even touch the BIOS to enjoy some extra performance.

Not putting the overlcock to waste, we’ve included them in our barrage of benchmarks for your viewing pleasure. 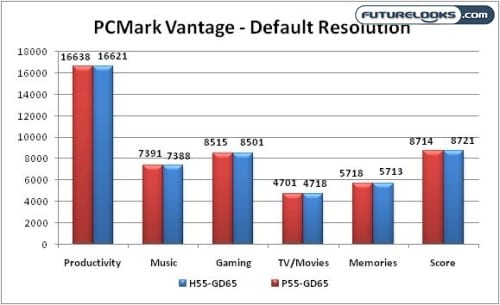 Since the chipsets are so close, there’s really not a great deal of performance difference. What we wanted to show you here is that H55-GD65 is an equally formidable platform if you feel like getting your gaming fix for the day. 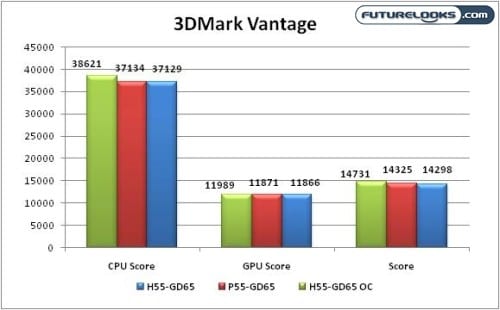 Hey, what do you know. When a ZOTAC Geforce GTX280 AMP! is tossed in to the mix, we get an out right aggressive platform. Sure, we could use the Core i5 661’s integrated graphics, but we are reviewing a “Gaming Series” motherboard. Not to mention, the only gaming you will be doing with the integrated graphics is “Farmville”.