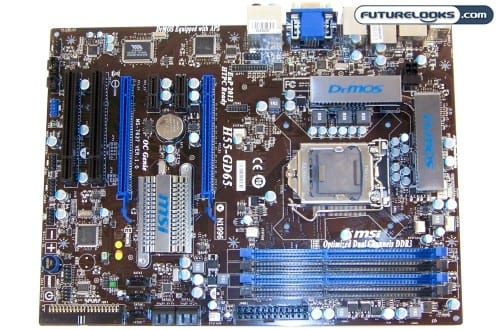 In a nutshell, the H55 chipset is mainly aimed at supporting multimedia platforms. What makes the MSI H55-GD65 unique is that it’s the only full sized ATX H55 motherboard on the market. Most of the regular H55 motherboards on the market are micro-ATX (m-ATX) models meaning they’re smaller, more compact, but with a few less expansion features. That is not the case here.

The platform also supports Intel Turbo Technology. Turbo is a new H55 feature that dynamically overclocks your Clarkdale 32nm Core i3 and i5 Processors when the system is hard at work. And, since the Clarkdale Core i6 Processors contain an integrated graphics processor (IGP), users now have the choice of using a discrete add-on PCI Express graphics card, or they can use the IGP which easily does everything you need in a basic PC including HD playback. 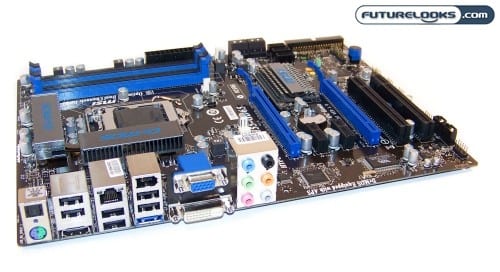 If you take a look at the H55-GD65, you’ll notice it offers every possible expansion feature including dual x16 PCI Express slots that support CrossfireX, but revert to 8x once you populate both slots. You’ll also find VGA, DVI, HDMI, and SPDIF out ports. These options are normally found on HTPC (Home Theater PC) multimedia motherboards.

No matter what you may be doing, this motherboard is designed to provide users with a full sized PC experience whether it be extreme gaming, overclocking, or HD movies. You’ll just have to decide if you’re doing it on your desktop HD monitor or on the 50″ HDTV in the living room. 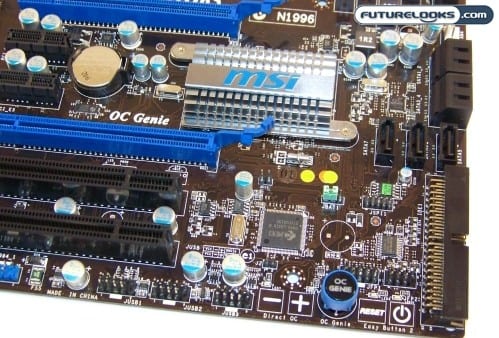 If you look at the bottom, right corner of the board, you can see the OC Genie button which enables the motherboard’s on-the-fly overclocking function. This sexy chocolate flavored motherboard sports touch sensitive buttons built into the PCB as well which are left of OC Genie button and are marked [-] and [+]. These buttons are for decreasing and increasing the CPU’s Bus Clock. And, to the right are the Reset and Power buttons, which are also touch sensitive.

One thing we noticed is that the board takes about two seconds to power up after pressing the power button. But, these particular kinds of buttons should continue to work long after you’ve upgraded this motherboard as they aren’t mechanical. Sure, it’s not necessary to have this feature, but it’s one tiny innovative step in personalizing the platform. 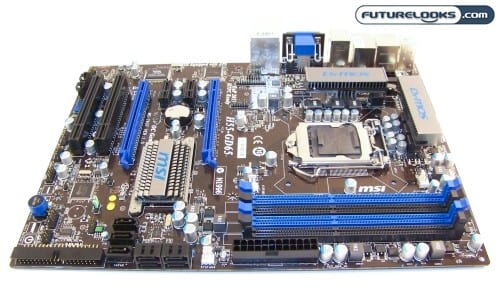 As far as the board’s layout, or design, there are only a couple things to note. First, kudos for the CPU socket’s location. It offers plenty of room for large CPU coolers and doesn’t encroach on the DIMM slots too much. Any CPU tower cooler will have plenty of room for installation.

Second, while the horizontal IDE and SATA ports are appreciated, there are three SATA ports that are conventionally mounted facing up. The #7 port is the only SATA3 port on the board. Wiring doesn’t quite look so neat compared to the horizontal ports.

If anything could be improved, these three SATA ports and IDE ports could be revamped. We’d also like to see SATA 3.0 ports, but none are to be had at this price point. While the purpose of the IDE port is to help users upgrading from an old system, it is time to get with the decade. We’re well past the slower IDE interface and working with Solid State Drives now. Eliminate the IDE and at least pick a couple SATA2 drives. You won’t be sorry.

Having said that, we do recognize that some users buy what they can afford and MSI is just making sure that on this end of the price spectrum, these users are taken care of.