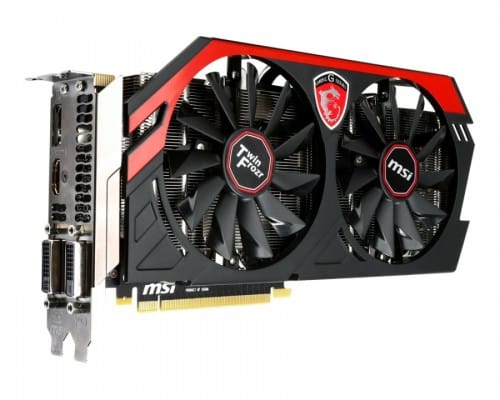 A product series is a simple way to ensure your audience, in this case, gamers, know what we are getting from a company no matter what. It also lets you know what the company had in mind when there were designing and building a line of products. MSI makes it loud and clear with the GAMING series of graphics cards and what their focus is on. While they do offer a unique set of small form factor GPUs and boards in this series, there is nothing small about the new MSI GTX 780Ti GAMING 3G graphics card.

When we reviewed the GTX 780 Ti reference card, it became one of the most powerful single chip GPUs on the market. MSI paired one up with their Twin Frozr IV Advanced Thermal Design and made it even more powerful by combining a fully customized PCB, two 100 mm fans, MSI patented Propeller Blade Technology, and MSI Airflow Control Technology for record breaking potential. You can take your GTX 780 Ti to the next level with one of three performance modes (Silent, Gaming, and Overclocking) to fit your needs. And everything is built with MSI Military Class 4 components for longevity and stability.

What more could you ask for? Well how about three AAA games to show off the graphical power of your new MSI 780Ti GAMING 3G. Take full advantage of the 3 GB of GDDR5 RAM with Assassin’s Creed® IV Black Flag™, Batman™: Arkham Origins. and Tom Clancy’s Splinter Cell® Blacklist™ free with purchase (for a limited time this holiday). You can find the MSI 780 GAMING 3G available now for $699.99 US at your favorite e-tailers (or under the tree if you’ve been REALLY good). The full press release is posted below.

Enthusiast Gaming Gets Even Cooler

MSI specifically developed its Gaming App tuning utility with true gamers in mind. All it takes is one push of a button to switch between card modes, including high-performance OC Mode for improved cooling and extreme gaming performance, Gaming Mode for perfectly balanced performance, temperatures, and stability, and Silent Mode, which reduces noise to a minimum and provides gamers with a more comfortable and relaxing user environment.

Get this Season’s best bundle of Assassin’s Creed® IV Black Flag™, Batman™: Arkham Origins. and Tom Clancy’s Splinter Cell® Blacklist™ free with the purchase of our GTX 780Ti GAMING 3G. Whether you’re taking on the brutal life of a Pirate Assassin, the underworld of Gotham City, or taking on global terrorists, you need DirectX 11 tessellation, HBAO+, and NVIDIA® TXAA™ antialiasing for stunning graphics, as well as NVIDIA PhysX® for a hyper-realistic experience. Also, get one-click settings optimization and game-ready driver support with NVIDIA GeForce Experience™, plus NVIDIA SHIELD™ support for unbeatable portable gaming and entertainment.