For those that aren’t familiar with MSI graphics cards, Live Update 6 is used for updating your video card’s BIOS, driver, or firmware. If you encounter any odd bugs, check MSI’s site or use LU6 to check for fixes. That’s always recommended before running any serious apps or benchmarks for the best possible experience.

Users have a choice of using either the Gaming APP or Afterburner, or both programs to overclock their video card. The Gaming App comes with three settings: OC Mode essentially puts your video card in overclock mode automatically; Gaming Mode which is the default automatically controlling fans and stock frequencies; Silent Mode which of course operates the video card as quietly as possible meaning lower dynamic frequencies. The snowflake sets the fan speed to maximum producing about 38 dB at two feet. Oddly, there’s no way to turn off the app with a simple push of a button. Instead, users have to right click on the tray icon to exit. The card worked perfectly with the Gaming App. 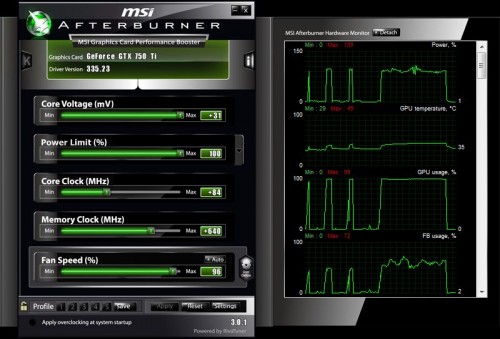 MSI Afterbuner came out swinging a few years ago proving to be one of the better GPU overclocking utilities around. Visually, it hasn’t been changed at all really. Most of the magic happens in the Core Voltage, Core Clock, and Memory Clock. The GTX 750 Ti OC already comes with higher factory GPU frequencies. Our sample card had a little extra overclocking to offer. The card topped out at +84 MHz Core Clock and +640 MHz Memory Clock. It isn’t nearly as high as some other samples but that’s the luck of the draw. 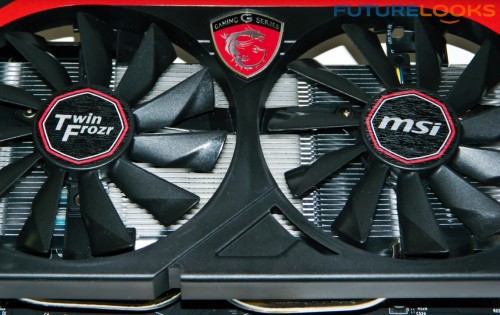 The above system with a relatively cheap case will cost around $800. These are good quality parts that should last for years to come. It’ll also be able to handle a more capable video card if a must-have game strikes your fancy, forcing another upgrade.

Let’s get to testing!

All the games used were tested using 1920 x 1080 resolution and very high game details. Tessellation was set to normal if the option was available. Otherwise, everything here is DX11 mode and default. Three passes were performed of each game which determines the average. 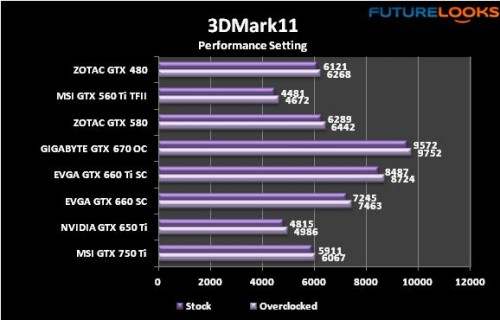 This benchmark depends heavily on memory bandwidth, bit-rate, and CUDA cores in order to really score well. While the GTX 650 Ti has slightly more CUDA cores, the MSI GTX 750 Ti scores better due to higher frequencies. Don’t expect it to set any records. 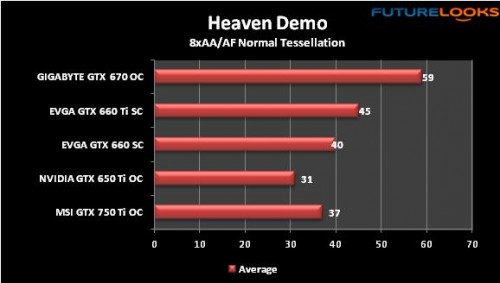 This synthetic benchmark gives us an idea that the MSI GTX 750 Ti OC is just at the cusp of enough to satisfy most entry gamers. It may very well depend on settings. Here, we use 8x AA and normal tessellation. Extreme tessellation drops it down to around 22 frame averages. So keep that in mind when looking at benchmarks. Sometimes, game settings may need turned down. 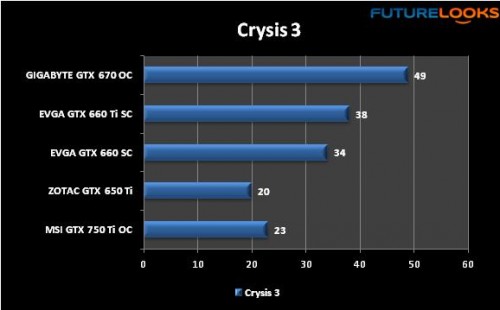 Even with Crytek’s recent financial woes, Crysis 3 is still the standard for PC gaming power. It loves bandwidth and bit-rate power which the OC has a limited supply of. It was choppy city unfortunately benching Crysis 3 at higher settings. Users may want to consider turning down settings to medium which allows about another 12 frame boost. Otherwise, consider a GTX 760 which will score around that of a GTX 670.

With that “Crysis” averted, let’s break out a few more gaming benchmarks and take it on home!