The back of the bag features an outside hatch pocket that allows you to store various personal items like jackets and magazines and other useful things. On my trip to Taipei, I had a large bottle of Maple Syrup and slab of Smoked Salmon. As a backcountry bag, pick axes, avalanche shovels, probes, avalanche beacons and climbing rope should be part of that list as well. However, there is some controversy here at the office as to whether or not this compartment would actually be secure for avalanche gear. As quoted from a very experienced backcountry guide: “If it’s not inside the bag, it will go flying if you get into an avalanche. If you throw your avalanche gear in it, and God forbid, get into a slide, you’re not going to live because your shovel, probe and beacon will be somewhere else while you suffocate”. 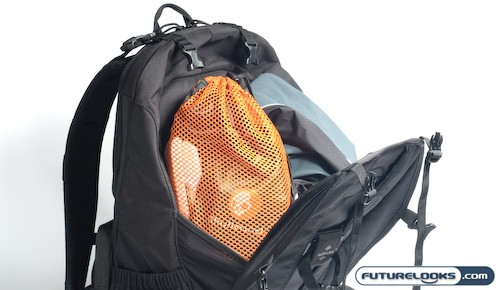 I do trust this person and I would probably listen to his words carefully as his experience far exceeds the average outdoor snow enthusiast. Although I cannot substantiate whether this is true or not, I don’t intend on getting buried in the snow to find out. However, I do understand the logic as the compartment is fairly open and stuff could be torn out of it with enough force, like an avalanche for instance. Moving along, I did also notice an expandable mesh pocket on the inside of the flap that can easily carry a small Camelbak bladder so you can stay hydrated outdoors. The whole flap is secured by four quick release straps. 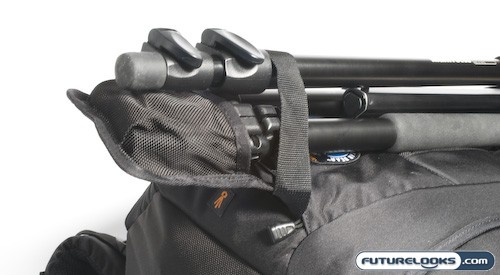 The Primus AW features a vastly improved tripod carrying system consisting of an adjustable Glidelock buckle up top and a pouch that rolls out to accept the legs. This pouch is zippered up and stowed out of the way till you need it. It is constructed well and should even hold up to tripods that are spiked thanks to the high density material. 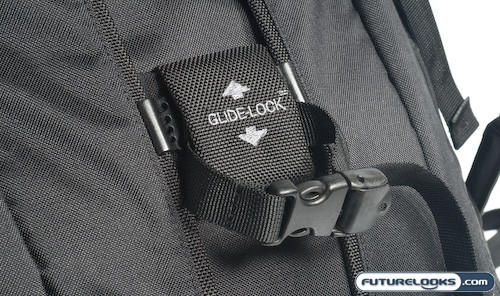 The Glidelock features lots of quick up and down adjustment allowing you to carry as big a tripod as you would want to carry around. The buckle is also adjustable and is very quick to disengage, allowing you to pull your tripod at a moments notice. I had no problems carrying around my Manfrotto 190XPROB Tripod and the attached 322RC2 pistol grip head. Compared to the silly elastic bungie cord of days gone by, this is like going from coal to nuclear power…not really…but nonetheless, still very cool. This features makes it onto many of Lowepro’s bags this year and not a moment too soon. The tripod storage also works with monopods and pick axes and shovels, but again, if it’s not IN the bag, our avalanche expert says it goes bye bye…and you too. 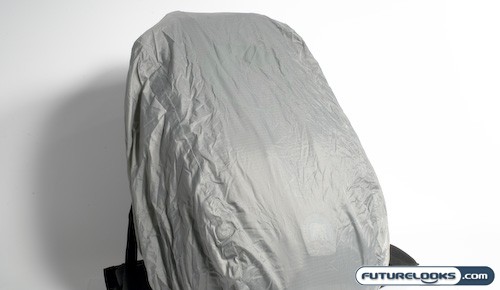 Lowepro’s seam sealed All Weather waterproof cover works just as well as ever, providing a layer of protection from rain or dust. In a foreign country during travel, it also works as a theft deterrent for all the things you may be carrying in the outside hatch pocket.