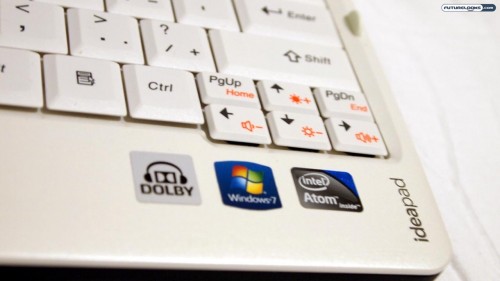 A comparison to the Gigabyte M912 convertible tablet I reviewed some time back is inevitable. These two products are very similar, except the Lenovo comes powered by Windows 7 out of the box, which is arguably better than the dated Windows XP. But that of course is a machine that is well over a year old. The rest of the specs and performance however are comparable.

Lenovo has done a good job with providing a stylized cover, but like so many other glossy covers, it is very much a fingerprint magnet. I find it interesting that Lenovo went with a “panda” color scheme too, as the top cover is black, but the keyboard are is white. This appears to be more prevalent in Asian markets than in Western ones.

Overall build quality feels quite solid, but I’d be wary of the moving parts involved with the swiveling screen over time. I know that the hinge on a regular laptop can get loose over continued use, so this more complex mechanism can become problematic. When folded into a tablet the two halves don’t seem to completely sit together as well as one would hope either. 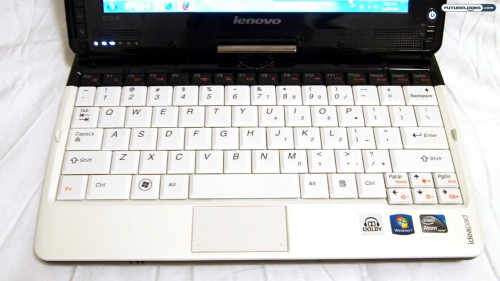 As mentioned, the majority of the keyboard is white. Only the top row, consisting of the standard function keys, is black. The spacing and size of the keyboard seems to work reasonably well; it won’t be as comfortable as a true full-size keyboard, but it’s pretty good for a netbook. I also appreciate that they included a full-size shift button on the right.

That’s the good news. The bad news is that the keyboard can feel quite cheap and “clacky” when you use it. The sizing is comfortable, but I would have much preferred a chiclet-style keyboard like what you find with certain Eee PC units.

Worse yet is the remarkably tiny trackpad. There are no dedicated “mouse” buttons for the trackpad, being replaced by tiny red dots in the bottom-right and bottom-left corners. The trackpad is textured and multi-touch, but it’s really too small to use for more than a couple minutes at a time. Since there are no dedicated buttons, for example, doing a click-and-drag or multi-select can be an exercise in frustration.

Using as a Tablet Device 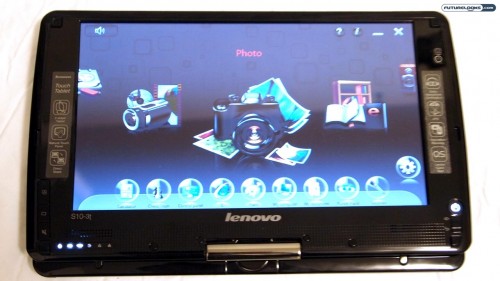 When you twist and flip the display around, it can fold back down flat so that it appears like a slate device. It won’t be nearly as thin as a dedicated tablet like the iPad or Galaxy Tab, but it’s still reasonably compact. Since Windows 7 isn’t exactly finger-friendly, Lenovo has included something it calls NaturalTouch.

This brings up a carousel-like interface and you swipe around to get to photos, web browser, e-book reader, and so forth. There are also a series of quick shortcuts docked along the bottom of the screen. The idea is that this makes the tablet easier to use with just your fingers. At least, that’s how it works in theory.

In practice, this NaturalTouch interface felt sluggish and I ended up using the Lenovo S10-3t more as a netbook than a tablet, which effectively nullifies the primary feature that separates this device from other netbooks.

General Everyday Use and Performance 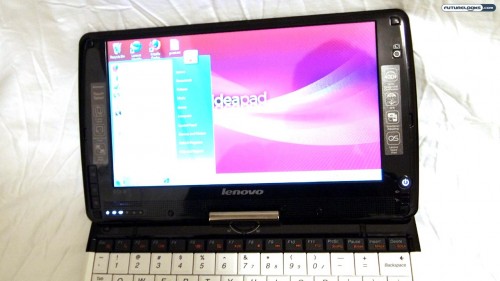 I went in wanting to like the Lenovo, but I ended up feeling disappointed. The lower 1024×600 resolution leaves something to be desired. The keyboard, while a good size, is nowhere near as nice as what you’d get on something like the Asus Eee PC 1000HE, which is by no means new anymore.

Yes, it’s good that Lenovo has included some notable features like the multi-touch display and embedded webcam (which is to the side of the screen rather than above it), but the final execution feels like this machine is clearly dated. As a netbook, you’re probably better off buying a real notebook. As a tablet, you’re probably better off buying an Android tablet or the iPad.

Don’t get me wrong. The S10-3t is perfectly usable, but there are other products that do it better. Especially when you factor in the price, I can’t really recommend something that is still powered by an N450 processor.