Kingston has been teasing a PCIe SSD product for quite some time now. We ran into an early sample at CES 2014 when it was merely wearing a heatsink from one of their HyperX Predator memory modules, trying to hide the goods under it. And then this year at CES 2015, we finally hear that they plan to bring the HyperX Predator SSD. This week, Kingston lets all the details about the HyperX Predator loose on the PC DIY marketplace.

The HyperX Predator PCIe SSD is an M.2 form factor, but it’s based on a Gen 2.0 x4 interface. This means that it’ll be up to twice as fast, potentially, as the already fairly fast Plextor 256GB PCIe M.2 unit that we reviewed last year. In fact, the HyperX Predator can reach speeds up to 1400MB/s read and 1000MB/s write, which is finally comparable to the internal units inside the TrashCan Mac Pro. The best part though is, because this product is built for PCs, it can be used to upgrade any system with a PCIe slot. In fact, the HyperX Predator will come in both the traditional M.2 “gum stick” 2280 form factor, but also, an HHHL form factor via an adapter, which will also be available in a low profile and regular slot height. 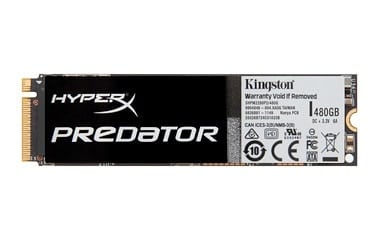 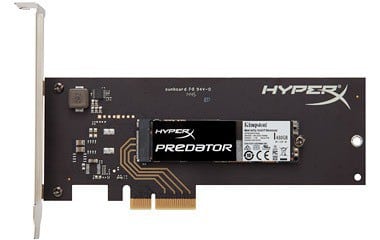 We’re happy to see Kingston and their HyperX brand finally hit the marketplace with their PCIe SSD products. The HHHL adapter versions should be very popular with folks still holding on to very powerful X79 or even X58 systems, looking for a high speed storage upgrade. Full press release is below.

HyperX Predator PCIe SSD offers large capacities (240GB, 480GB) and incredible speeds to take systems to the edge. Faster than SATA-based SSDs, the PCIe generation 2.0 x4 interface delivers speeds up to 1400MB/s read and 1000MB/s write for ultra-responsive multitasking and an overall faster system. It is powered by the Marvell 88SS9293 controller.

The M.2 form factor ensures next-generation platform support with an M.2 PCIe slot. An optional half-height, half-length (HHHL) adapter is also available for many existing motherboards without an M.2 socket. The HHHL adapter comes with both standard and low-profile brackets to fit in slim profile desktop builds.

HyperX is the high-performance product division of Kingston Technology encompassing high-speed DDR4 and DDR3 memory, SSDs, USB Flash drives, headsets and gaming accessories. Targeted at gamers, overclockers and enthusiasts, HyperX is known throughout the world for quality, performance and innovation. HyperX is committed to eSports as it sponsors over 20 teams globally and is the main sponsor of Intel Extreme Masters. HyperX can be found at many shows including Brasil Game Show, China Joy, DreamHack, gamescom and PAX.

2 Based on “out-of-box performance” using a PCIe 3.0/2.0 motherboard. Speed may vary due to host hardware,

software and usage. IOMETER Random 4k Random Read/Write is based on 8GB partition.