Does Value Mean Cheaply Made?

While I didn’t have the pleasure of owning any first generation SSDs, I did experience some problems with early controllers. Those glitches included stuttering, small data block performance drops, and odd access issues mainly caused by a combination of said SSD controllers and compatibility issues with some motherboard chipset controllers. You’ll be pleased to know that the Kingston 128GB SSDNow V-Series Solid State Drive has updated controllers and we’ll be looking for these issues in the benchmarks. 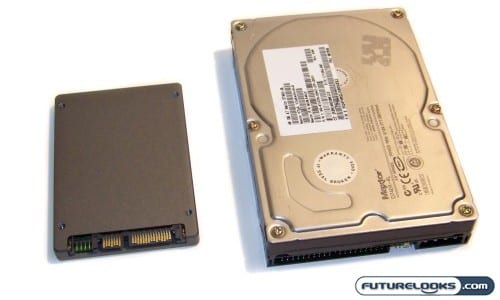 As you can see, SSDs are much smaller than conventional hard drives and weigh far less when compared to this dated IDE Maxtor that we used purely for size empahsis. The day we see some larger capacity SSDs will be a great day for people lugging their heavy systems to LAN Parties. Even laptops can shed a few extra ounces. Every little bit counts when you need to lug a 9 pound laptop around al day. 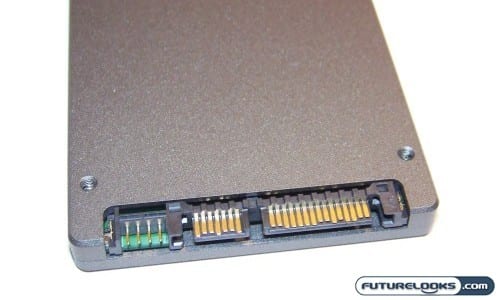 Other than its size, there’s nothing fancy about the SSDnow V-Series in its appearance. The housing of the SSD is made from lightweight aluminum and seems fairly well put together. There’s nothing cheap about it in terms of fit and finish. The back end has the same standard SATA power and data cable headers as conventional mechanical drives.

Looking at the size of the SSD had me contemplating what future computer cases were going to look like. Perhaps, by that time, prices will be so low that everyone will be flaunting four to ten large capacity SSDs inside a much smaller sized computer cases. I’m sure there’s a manufacturer thinking up ways to trim some more aluminum off a case to offer a more exotic looking enclosure.

There aren’t any special directions to mounting the 3.5″ adapter brackets to the SSD. With a little bit of patience, it’s easy to see how the brackets work. There’s two sets of holes for installing up to two SSDs per bracket set. However, I like extra space underneath my drives for tucking wires underneath as well allowing some kind of air flow. It’s just a habit of mine since hard drives can get pretty warm. 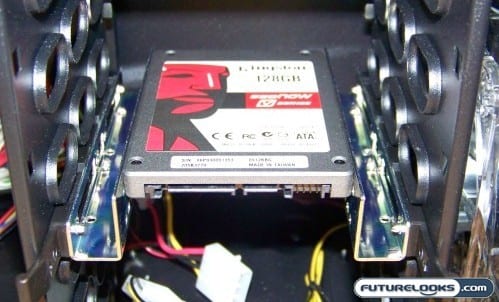 The drive was installed in to the Cooler Master Storm Series Scout Gaming Case that we recently reviewed. I chose this case because it’s basically an elite gamer’s budget performance case and is designed for mobility. A couple of tool-less brackets later and the SSD was mounted. Using Kingston’s brackets, one could install up to 12 SSDs in the lower bay of this case!

The test system was assembled based on parts that exhibited the best mix of mobility and performance. The full manifest includes:

Our Kingston SSDnow V-Series will be going up against the fairly common Seagate Barracuda 7200.11 500GB SATAII hard drive in our tests.

Aside from plugging in the drive, Windows installed a bit quicker on the SSD than my Seagate 500GB SATA II drive. I’d say it knocked off about 5 minutes easy. And boot times were dramatically reduced despite my Vista installation that I keep well tuned. Speaking of which, there is one final very important note.

Due to the design of the NAND used in all SSDs, it is important to disable Disk Defragmentation in your operating system lest you want to wear out your shiny new SSD prematurely. Some vendors put this important information in the documentation while some don’t. We’ll save you the hassle and inform you it’s the same for all SSDs on the market until we’re told otherwise. Now let’s see what the Kingston SSDnow V-Series can do!