Since this particular triple channel HyperX 2250MHz kit has two XMP profiles, we opted to test both and give you performance numbers for both. That’s 2000MHz and 2250MHz respectively. To test the 2250MHz profile, a moderate CPU bus clock of 160 and 25 multiplier produced a CPU core frequency of 4GHz. Using the 2000MHz profile, a 167 CPU bus clock  and 24 multiplier were used to achieve 4GHz. The goal is to maintain 4GHz while controlling the CPU bus to compare the performance.

First we got a base line 1333MHz stock supported memory score without overclocking anything. At this frequency the memory kit is capable of producing up to 22GB/s of bandwidth. Once the CPU bus and memory frequency were increased, we see a whole new animal. 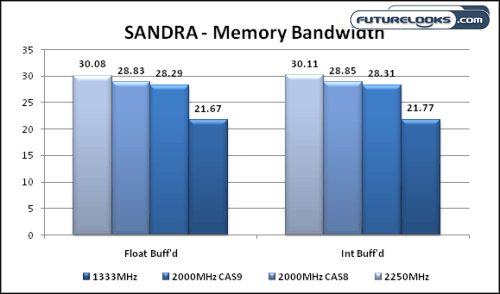 Right out of the gate, the 2000MHz XMP profile puts the memory controller to work producing 28.82 GB/s versus 28.23 GB/s on a slower CAS 9 kit with the Patriot Viper II kit. This reveals the benefits of lower CAS timings. At 2250MHz, the memory leaves the other two well in the dust providing 30.51 GB/s of bandwidth. Not too shabby at all with just a 160 MHz bus clock.

Rinsing and repeating the settings, there was much of the same in terms of performance differences. 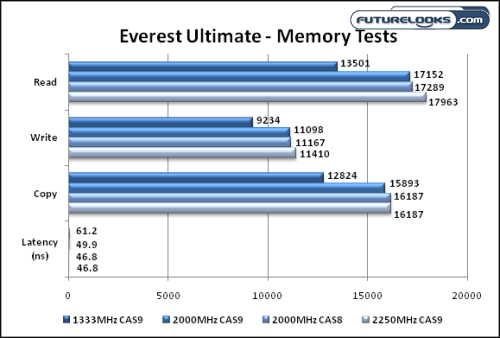 While the lower CAS 8 2000MHz memory timings out pacecd the CAS9 timings, it was the 2250MHz frequency that reigns victorious. One of the more dramatic improvements comes in the form of the memory latency. With a lower latency, the system springs to life reading and writing data to the RAM exponentially. And, yes, the system is noticeably snappy and quick to load applications.

Typically, overclocking just the memory alone has very little, if any, effect on video game performance. There are more gains from overclocking the video card or CPU normally. However, we do test nonetheless to see if this holds true at these memory speeds. 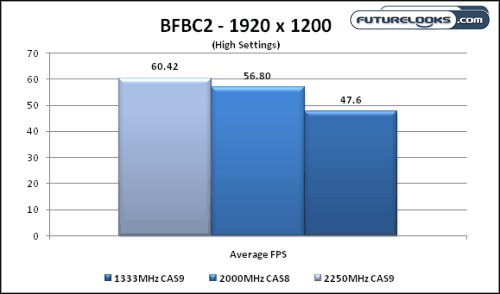 Benchmarks that require CPU brute strength do seem to benefit from a good amount of memory bandwidth. We put that to the test with this rendering benchmark. 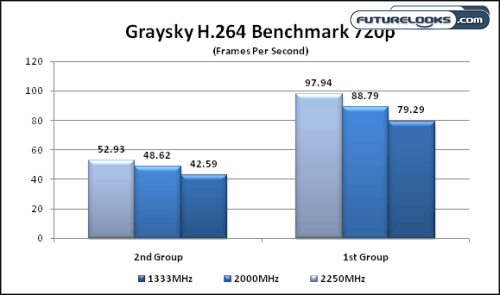 Since I used the GIGABYTE GA-X58A-UD5 motherboard, I had no problems rendering files over and over. While you can’t see the benefits of overclocking the RAM, you can at least see how it supports the processor and any tasks you assign it faithfully. There were no crashes reported with this memory kit at all tested frequencies which is important when using this kit for work rather than play.