To pop the microSDHC card into the Micro Reader, you first open that plastic hatch. Doing so reveals the place where you would insert the card. There is a small slider in place that is supposed to be used for ejecting the memory card after use, so you’ll want to ensure that it is retracted when you insert the card. Otherwise, you may cause some unnecessary damage to some of the components. 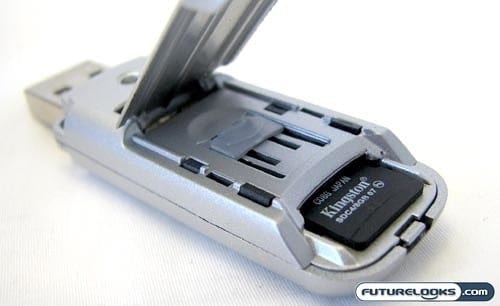 After doing so, the card will go in almost all the way. Only that raised fingernail portion should be exposed. We’ve heard that some samples only accepted the card about halfway and doesn’t allow the card to make contact. Make sure you test yours before taking off on a world tour.

After Closing the hatch, I plugged the Micro Reader into an available USB port on my laptop. Giving it a second, Windows then recognized two external drives: the internal memory of the Micro Reader (USB flash drive) and the “external” drive of the microSDHC card. It may not be immediately obvious which is which, so it’s probably a good idea to name the volumes accordingly so you know which is which. On with the performance tests!

Putting it through its paces on HD Tune, I came up with the following benchmark scores. 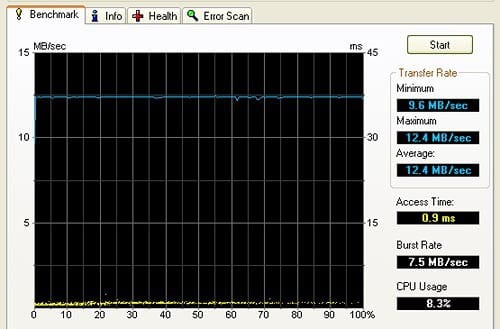 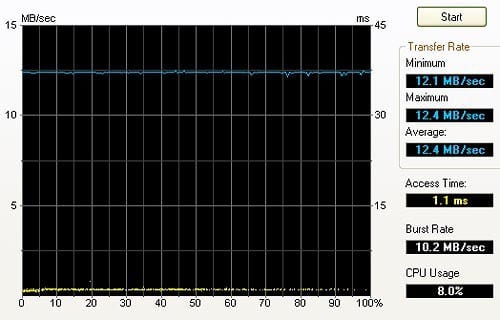 Is the “external” memory of the microSDHC card any better? According to the HD Tune test shown above, the benchmark scores are about the same as the USB flash memory. However, putting the memory card reader through its paces in a real world test revealed some severe shortcomings. The write speed worked out to about 4.1MB/sec, whereas the read speed came out to about 11.7MB/sec. That write speed is about half as fast as the internal memory, though the read speed isn’t that much worse.