I take any integrated audio performance seriously since it’s an important feature all end users intend to use. I used RMAA along with powered Altec Lansing speakers, Sennheiser and Sony high quality headsets. Any noise RMAA might find should be audible when listening through these audio sources. If you have 60 to 150ohm speakers or headsets, you’ll pick up on any inline noise, clipping (when the audio pops because of poor output), and cross talk (when the channels leak over in to the other channels) as well. 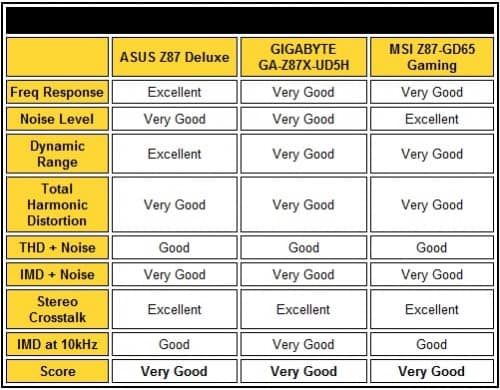 It’s evident that each manufacturer has stepped up the audio experience by adding capacitors and improving implementation. The ASUS Z87 Deluxe produced surprisingly clear and relatively strong audio without any noise or clipping. The MSI Z87-GD65 Gaming was very similar but uses the Creative Sound Blaster Cinema software to unlock some emulation. However, the Gaming’s audio fell just a little bit short in keeping up in volume yet still a decent experience. The GIGABYTE GA-Z87X-UD5H didn’t present any issues producing pretty decent quality but the ALC898 codec doesn’t seem to have the volume even with the Sound Blaster X-Fi MB3 emulation software.

In the end, all the boards create volume levels that won’t make ears bleed but will more than suffice. 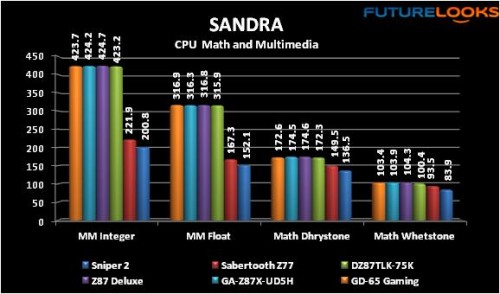 Motherboard tuning plays a significant role in overall performance. To identify which boards are wired for the best results, the platforms were tested with SANDRA Mathematical and Multi-media. I was surprised to see the three boards perform so similarly this time. Usually, there is more than just a miniscule 5% difference and there really isn’t even that. There’s just no decisive winner here. 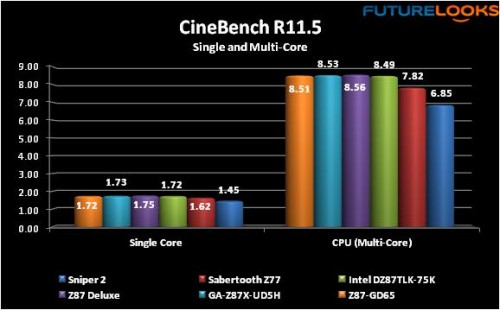 While Cinebench is a synthetic rendering benchmark, it does reveal any CPU, memory, and motherboard tuning benefits. I discovered the Deluxe to be a bit more aggressive here but only by some. Both ASUS and GIGABYTE tune their BIOS to run right at the Intel validated CPU limit. MSI doesn’t always tune their boards quite the same. In fact, I found the MSI board’s CPU clock to run 99.5% versus the other two 100.6%. Is anyone going to notice this difference? Not very likely.

Just about everyone has a video capturing device these days. Many people aren’t aware that Intel worked closely with Arcsoft and Cyberlink to optimize affordable software for 2nd, 3rd, and 4th Generation processors. You don’t need a high end video card to make very quick work of “resizing” your videos. 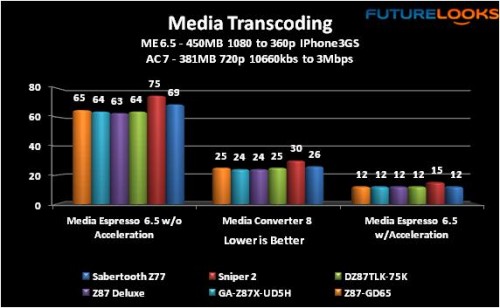 As you can see, these are very similar sized files found on small video cameras and smart phones. Even the old school Core i7-2600K isn’t far behind the three 4th Gen Z87 motherboards. If you’re a social media hound, either of these boards will more than suffice even without a video card. 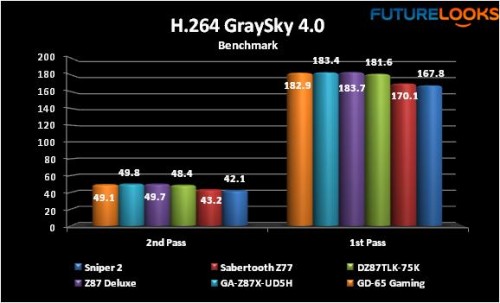 Graysky is another far more serious media transcode benchmark more indicative of people who like transcoding much larger pro level video. In layman’s terms, converting 1080p video over to more easily viewed and stored 720p video goes very, very quickly even if it’s a 2GB video. Again, the trio keep up with each other. 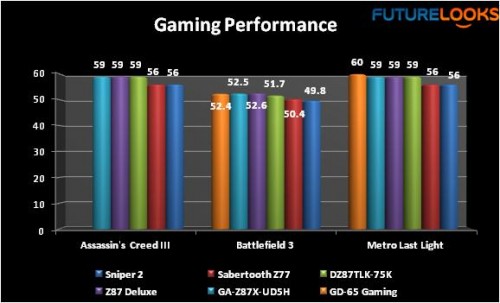 It’s down to mere pennies difference between the Z87 boards. All three support the GIGABYTE GTX 770 OC nicely. Unfortunately, I didn’t have an MSI video card to test the GPU Boost feature which I’d like to confirm later. For now, rest assured either board will support your GPU at maximum settings. 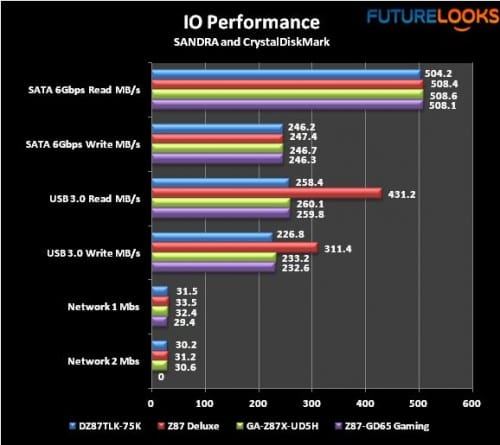 Since the Z68 days, ASUS has been implementing their own special flavor USB 3.0 Boost and UASP drivers. When either is enabled, performance is much faster than the default USB 3.0 devices. As you can see, the enabled setting leaves the rest behind considerably. When it comes to SATA 6Gbps performance, it’s more even since it’s all Z87 Express Chipset controlled. Networking tests over the internal network favors the Intel Gigabit controller whereas the Killer E2100 is just a bit slower.

With the testing now complete, it’s time to wrap this up and give you our thoughts on these three boards and how they might fit into your next build!