Gamers Need Gear and Hardware Too…

As mentioned earlier, Razer had a huge presence at the World Cyber Games, supplying mice and keyboards for the competition systems.  But their presense wasn’t just about selling products. Most of the employees at Razer, inlcuding their CEO, Rob Krakoff aka “RazerGuy” are gamers themselves and are deeply immersed in the gaming culture. He even had the time to sit down with me to tell me more about his company and how truly tuned in they were to the gamers. All their employees game, and the ones that don’t, start polishing up their games quickly because it’s sort of a rite of passage.

Razer’s participation at the games also allows them to gather firsthand feedback on their products and conduct on the spot R&D, further allowing them to tune their products for peak gaming performance. With over 700 professional gamers at the event, it’s like R&D heaven. Even Microsoft recognizes Razer’s gamer focus and the two companies have worked together in the past on gaming mice and keyboards, though they had nothing to do with the SideWinder Mouse that was recently released by MS. Let’s just say that there was a big “groan” when that product was mentioned and it wasn’t the “I wish I thougth of that” groan. 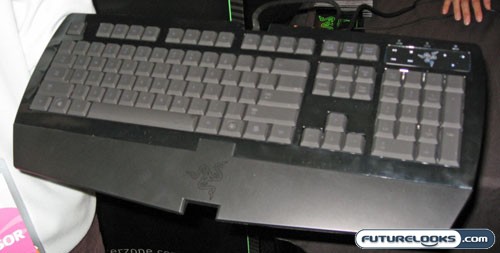 While at the show, Razer announced a couple new products that should be hitting the store shelves shortly.  The keyboard above, called the Razer Lycosa features 1000Hz Ultrapolling™/1ms response time for ultra fast responsiveness. It also features illuminated, non-slip rubber keys and Hyperesponse™ technology. 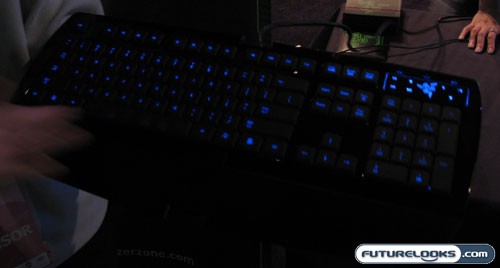 The Lycosa can be considered a lighter and thinner version of their Tarantula keyboard, and based on gamers needs, they created this one to be more suited to LAN gamers that need to tote around their gear.  It also features accessible USB, earphone and microphone jacks so that you aren’t always reaching down to plugin.  I had a chance to play a few games with this keyboard and it definitely has a nice feel and is super responsive.  Although all the keys light up, you can actually make just the WASD keys light up if you like, so it doesn’t interfere with your vision in a dark room. The Lyosa also features a super beefy cable that can take the abuse of being plugged and unplugged all day long. 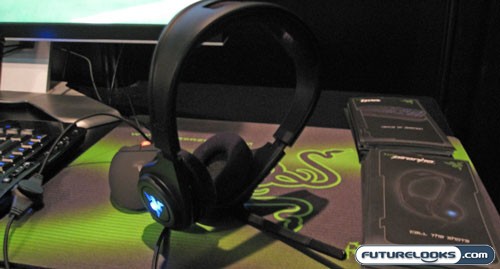 I also had an opportunity to check out their new Piranha gaming headset, also launching at World Cyber Games.  The Piranha features glowing earpieces with the Razer logo and are fairly lightweight. They actually reminded me of a Sennheisser PC151 headset, but more refined, more beefy, and lighter. The cord is extra thick to resist those accidental pull outs from the headphone jack and the mic flips up and out of the way when not in use.  The earpieces were quite comfortable and the sounded great in Command and Conquer 3 that was on demo. I didn’t have a chance to listen to any tunes with them however so I can’t comment on music performance. The Piranha also features an inline volume control with mute. Hopefully I’ll be able to spend some more time with these when they officially launch.

Sapphire was there to support the gamers and to show off their new Dual HD2600XT GPU Video Card. The HD2600 X2 comes with memory options of 512MB or 1GB of GDDR3 memory clocked at 800MHz (1600MHz effective) and each GPU core is clocked at 800MHz. It has four Dual Link DVI outputs that can be used to drive four separate high resolution displays at up to 2560 x 1600, or with CrossFire, enabled will drive a single display for higher performance.

The X2 also supports HDCP and HDMI over the DVI interface with the correct HDMI Adapter to DVI adapter. Like most big GPU’s this day, it will take up two slots and is just slightly taller than your standard GPU and will require two 6 pin PCIE power connectors. These should be hitting retail very soon.