All competing gamers got to sit behind big shiny displays supplied by Samsung, who is also the main sponsor of the World Cyber Games.  I’m willing to bet that a lot of the xbox gamers practice on displays only half the size of the massive 40+ Inch panels that were dropped in front of them, and even if they did have a panel that big at home, they certainly wouldn’t be 2 feet away from them.  I’m sure a few gamers were thrown off their game by that. I got queezy sitting that close to some of the gaming stations myself.

PC Gamers got treated to 22 inch widescreen LCD panels from Samsung and Razer Gaming Keyboards, Mice and headsets wers standard equipment, however many of the competitors preferred to run their own mice, keyboards and headsets.  I noticed a lot of Logitech gaming mice and keyboards in the competition pits, but I wouldn’t be surprised if a lot of the gamers had sponsorships setup.

Finals were carried out on stage in front of the whole crowd in these little spaceship like capsules.  As competitors were called on stage, they had a chance to do a little showboating like backflips. I guess they really are atheletes!  Even more so than a Golfer! When was the last time you saw a Golfer do that on the green?

What About the Spectators?

Spectators were treated to big beanbag chairs and huge TV’s in the center of the venue while semi-finals and eliminations were taking place in the pits. 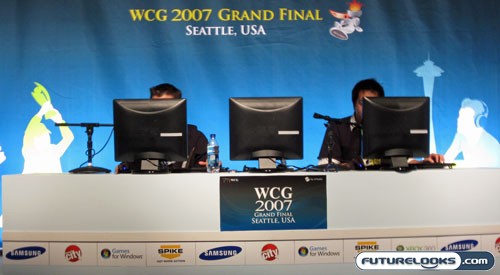 When the big showdowns began, spectators were treated to live commentary and play by play by seasoned commentators.  I must admit, they did a really good job calling the games, giving the crowd a lot of decent information and creating drama and tension through their descriptions of players triumphs and mistakes. 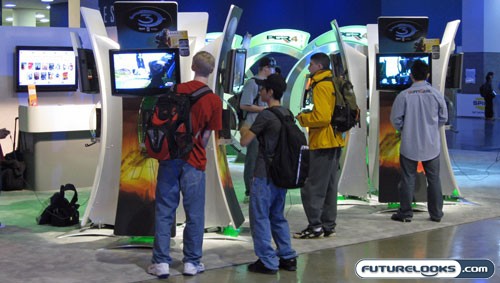 One of the things that is interesting at a world caliber gaming competion like World Cyber Games is the fact that the games at the demo booths were all turned up to their most difficult levels.  I found myself struggling with a lot of the demo game stations and just couldn’t figure out why…till I checked the settings.  I thought I drank too much of the free pop in the press room and started to have a sugar crash (I don’t usually drink pop at all…at least not anymore). In fact, almost every game was set to Godly levels.  I was also playing Halo 3 on the local network, a game I’m actually doing OK with on legendary, and kept getting my ass handed to me.  To add insult to injury, as I looked around the corner to the other stations, it seemed that I was taller than most of the other players and probably a good number of years older. There’s nothing like getting your ass handed to by a 12 year old that makes you feel more like a man!