It’s been a few months now since the initial launch of Intel’s X99 chipset, and all the wonderful boards that support that. Now that manufacturers have had a chance to get to know the new hardware, and what it can really do, it’s time for new boards to arrive that take better advantage of those features. GIGABYTE is one of the ones out there with new revision boards, and they are calling them the Champion Series.

The new GIGABYTE X99 Champion Series motherboards are built to handle more overclocking and generally, run more stable at regular workloads. Some of the features carried over from the company’s well known overclocking endeavors include suport for XMP profiles up to 3400MHz on their new X99-SOC Champion board. However, 3200MHz  support for the other three boards in this refresh isn’t bad either. Speaking of memory, support for 16GB RDIMM modules is now official, allowing you to load up all 8 slots on some boards.

While this is mainly a refresh to support the larger memory modules, and the faster speeds, GIGABYTE has made sure that server class chokes, enhanced power stages, and improved audio and networking are all part of the package. So in a nutshell, you should be getting a more stable board overall. 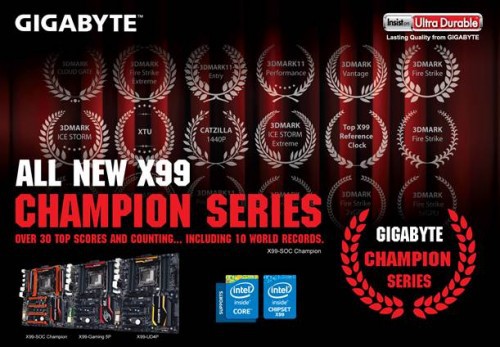 The new boards will consist of the X99-Gaming 5P, the X99-UD4P, X99-UD3P, and the X99-SOC Champion. All of these boards will be rolling out to market within the next few weeks. Pricing is still to be determined, but what we have been told is that they’ll sit a few dollars above the current models they are closest to, and will not be replacing them. So if you want to save a few dollars, the current boards only give up memory performance. So if that’s not important, then you can save a few dollars.

Full press release and details are below. A new microsite is also available with additional info.

“Since its launch in January, the GIGABYTE X99-SOC Champion motherboard has become the undisputed performance leader for X99 motherboards with over 30 top overclocking scores under its belt including 10 World Records, commented Henry Kao, Vice President of GIGABYTE Motherboard Business Unit. “With the launch of our latest X99 Champion series of motherboards, we wanted to extend the same levels of performance leadership including support for the world’s fastest DDR4 memory to our X99 G1™ Gaming and Ultra Durable series motherboards.”

DDR4 memory modules are available at a stock frequency of 2133MHz, but memory vendors encode XMP profiles which can automatically modify the frequency and timings of the supported memory modules to work in par with your CPU. With the X99 Champion Series, GIGABYTE is offering a tested and proven platform that ensures proper compatibility with profiles up to 3200MHz, and exclusively 3400Mhz for the X99-SOC Champion.

Paired with DDR4 memory such as the Corsair® Limited Edition Orange Dominator® Platinum kit, which was custom designed for the GIGABYTE X99-SOC Champion motherboard, users can take advantage of better responsiveness during gaming and faster operation execution in memory demanding works applications.

GIGABYTE X99 Champion series motherboards also provide support for RDIMM memory which allows users to use greater density memory sticks up to 16GB per stick. This paired with a range of exciting features such as the GIGABYTE’s Amp-Up Audio, Killer™ E2200 or Intel® gigabit Ethernet controller and unique GIGABYTE Ultra Durable™ features means that users can truly build a PC that brings them exceptional performance and durability.

GIGABYTE X99 Champion series motherboards integrate the absolute best quality solid state capacitors that are rated to perform at the maximum efficiency for extended periods, even in extreme performance configurations. This provides peace of mind for end users who want to push their system hard, yet demand absolute stability.

GIGABYTE X99 Champion series motherboards come equipped with a 30 micron thick gold plating, 4 PCIe slots and over the DIMM slots, which means that enthusiasts can enjoy better connectivity, absolute reliability and longevity for the diverse connectors overtime, without having any concerns about corroded pins and bad contacts.

Featured across the other Champion motherboards is the Realtek ALC1150, a high-performance multi-channel High Definition Audio Codec that delivers an exceptional audio listening experience with up to 115dB SNR, ensuring users get the best possible audio quality from their PC.

GIGABYTE, headquartered in Taipei, Taiwan, is known as a global leading brand in the IT industry, with employees and business channels in almost every country. Founded in 1986, GIGABYTE started as a research and development team and has since taken the lead in the world’s motherboard and graphics card markets. On top of Motherboards and Graphics cards, GIGABYTE further expanded its product portfolio to include PC Components, PC Peripherals, Laptops, Desktop PCs, Network Communications, Servers and Mobile Phones to serve each facet of the digital life in the home and office. Everyday GIGABYTE aims to “Upgrade Your Life” with innovative technology, exceptional quality, and unmatched customer service. Visit www.gigabyte.com for more information.