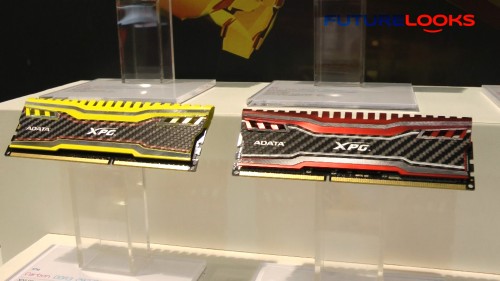 Although the Futurelooks Team was not able to make the trip overseas to cover COMPUTEX 2013 this year, we did do our best to keep up with the latest news from the show thanks almost entirely to our resident AMD guy, James. While he did a fantastic job, we know you expect to see video coverage from Futurelooks because you’ve told us that we do a great job of it. And that’s what led our US rep from ADATA Technology to sneak some clips out of their booth for us to turn into a video!

At the ADATA Technology booth at COMPUTEX Taipei this year, they showed off some really cool looking products. But we’ll let the video do all the talking…

If you’re having trouble viewing the video, you can check it out on our YouTube Channel directly. Below you’ll find some of the quick reference highlights from the video.

ADATA XPG V2 Modules (00:22) – The new ADATA XPG V2 heatsink designs were featured at the show. We have a press release right here that goes through some of the retail details of what you’ll be seeing on the shelves soon. They take full advantage of the new integrated memory controller on Intel’s new Haswell platform.

ADATA XPG Carbon Prototypes (00:42) – ADATA showed off some new module designs with carbon fibre inserts. We may never see these as they were just a concept.

ADATA XPG Chameleon Prototypes (00:58) – The Chameleon heat spreaders they were showing off were the coolest of all. The windows in the spreaders turn clear as the temperatures ramp up. This is one unique concept we hope ADATA brings to market.

ADATA DashDrive Air (02:06) – ADATA released a DashDrive Air at CES 2013, but the new one has some upgrades including an internal 500GB hard drive and the ability to charge a phone with a fairly large 5200mAh internal battery.

ADATA UD320 MicroUSB Flash Drive (03:02) – The UD320 USB flash drive has both a full sized and micro USB connector. It’s meant to extend the storage on your smartphone easily in capacities of 16 and 32GBs.

And that’s our look at what ADATA Technology had to show off at COMPUTEX 2013 this year. Make sure you leave your comments as our peeps at ADATA often want to know what your thoughts are on their products, good, or bad. And if you missed our COMPUTEX 2013 news spree, you can check it all out right here.