A Closer Look at the Silent Cell

There are a few things that make this card a viable alternative to a noisy actively cooled version. But first, we’ll check out the most obvious: The Silent Cell cooling solution. 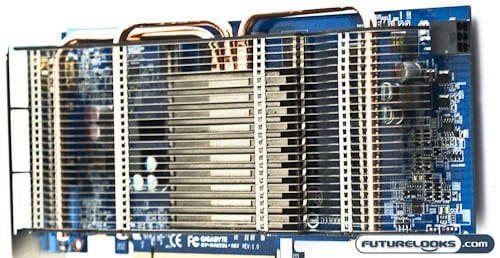 Attached directly to the GPU is this massive cooling contraption known as Silent Cell. GIGABYTE chose an octopus as the mascot for this thing and I guess the three copper heat pipes sort of do make it look like a huge octopus reaching out to all four corners of the large array of aluminum fins. The fins are thin, tall, and mount directly to a fairly wide copper plate that helps distribute the heat across the surface area of the cooler. It also restricts itself to the same foot print as a regular dual slot video card, which makes the installation process fairly easy as there aren’t pieces sticking above, or behind the PCB.

Four screws attach the silent cooling solution onto the GPU and although it is pretty big, it isn’t particularly heavy. The solution along with the GPU is only 521 grams. Heat paste is used in place of a thermal pad to ensure the best possible heat transfer. The only thing that keeps this from being a really decent is the fact that the mounting surface isn’t polished to a mirror like shine. In fact, the surface is actually quite rough when compared to other high end cooling solutions.

Although this isn’t a huge deal, it might make a difference to the overall temps and would show a little more quality control on the part of GIGABYTE. We’ve learned to expect these things from their motherboard division so we expect the same from their video card division too. They did, however, use a reasonable amount of heatsink paste instead of slathering it on and having it leak all over the place when heated.

The Other Part of the Magic Formula

As noted, the HD 4850 is not the most thermal friendly GPU out there. In fact, it idles at a fairly crazy 75 C’ish with the stock cooling solution in a 26C room. Fully engaged, the GPU easily reaches 100C+ in a case. That’s why I had to have a look at this thing because I couldn’t believe that anyone would be crazy enough to put a passive solution on this card and stand behind it. It appears GIGABYTE is crazy enough.

This insanity isn’t without calculation though. You see, GIGABYTE has been touting something called Ultra Durable 3 in their latest motherboards. They’ve brought this to their VGA products and have dubbed it “Ultra Durable VGA”. This latest technology specifies the use of a 2oz copper PCB and high quality solid power components just like on their motherboards. Both of which allow their boards to not only run cooler, but provide the stable power needed to break world overclocking records. This same technology is found on this video card.

By combining these technologies onto a PCB, this gives GIGABYTE the headroom to create this card and make it stable. Although I’m a little skeptical, they also claim overclocking capabilities for this card in the form of a 10-30% increase over reference. GIGABYTE also claims between a 10-30% reduction in power loss due to switching as a result of the use of these high quality components.

There is still one last piece of the puzzle that keeps that card from flaking out from heat and that’s the memory. GIGABYTE chose to go with Tier 1 Hynix or Samsung DDR3 modules. Our sample came with the Samsung chips. Since the cooling solution from the reference design cooled both GPU and memory, GIGABYTE had to find some modules that could run at the reference 960MHz without causing grief without cooling. These modules make it possible to run at said speeds without the aid of cooling.

Since GIGABYTE advocates a bit of overclocking on the packaging, we’ll have to see if we get anywhere with these. My intuition says no, but who knows because 10-30% on cooling assisted memory is pretty high. But 10-30% without cooling seems way optimistic.