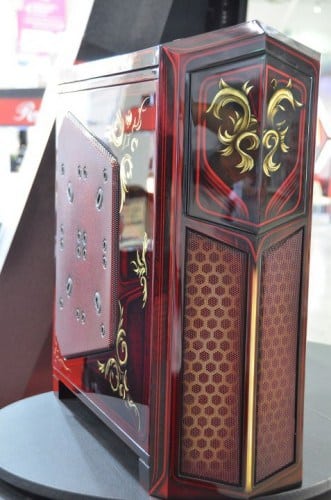 Never one to be left out, Rosewill is showing off a huge number of items at Computex 2013. Some of these items are new, some just have not be featured at an exhibition, and some just have a really awesome paint job. We are happy to bring you some of the most talked about items the company has brought to show off.

Lets start with the Rosewill PC cases, starting with the THRONE Air Runner. While not the name I would have selected, you cannot deny the stunning paint job for this case. The burnt reds and browns are perfectly complemented by the gold paper flakes. This is in addition to showing off the Neutron and Stealth PC cases which there are few details about at this time. I am sure Rosewill will be releasing more details as the show begins on June 4th. 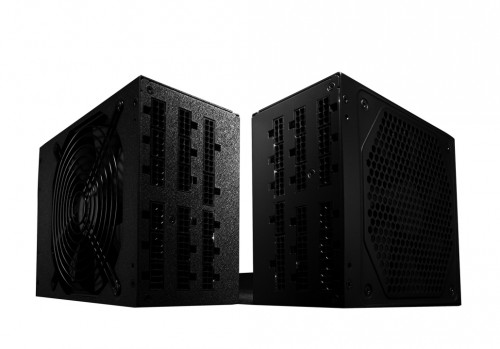 Next is a full line of power supplies including the Capstone and Tachyon series. Both of these lines will be getting new fully modular versions. If you recall, the original Tachyon scored extremely well in our recent review , pleasantly surprising us with a great price too.

They will also be debuting the new EPOCH, Rosewill’s first all digital power supply which is also fully modular. These new models will include three 80+ Platinum rated units and one 80+ Gold unit. The latter of which I am sure is the EPOCH. They have definitely been aggressive in the power supply market. 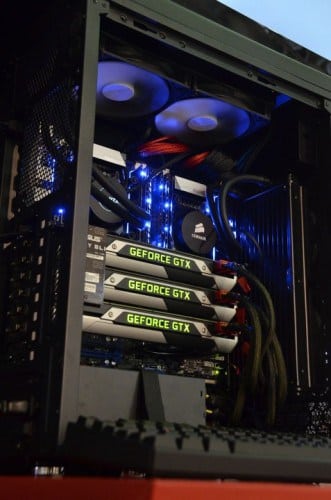 And to top things off, you can check out the dual Intel E5 Xeon system with  3-way SLI EVGA GeForce GTX TITAN graphics cards, and twin 280 mm water cooling units built with inside the Rosewill Rise for just general awesomeness.

June 3rd, 2013 – The world’s leading hardware solutions provider, Rosewill®, will showcase their latest innovations and premiere a new line of products at Computex 2013 that will leave you wanting more. Rosewill® will debut 3 80Plus Platinum and 1 80Plus Gold Certified gaming power supplies and world premiere a new power supply named, EPOCH, Rosewill’s first digital power supply supported with a fully modular design. The community favorite CAPSTONE series will feature a fully modular system and the highly rated TACHYON series will also feature a fully modular system. Rosewill does not stop there. Rosewill® will debut three very potent gaming cases that are a definite must see: NEUTRON, STEALTH, and Rise. Included with these powerhouse unveiling of power supplies and cases, Rosewill has the perfect keyboards that compliment your new build. The best-selling Rosewill® RK-9000 mechanical keyboards that you know and love just got upgraded.

Making its world debut is the new illuminated RK-9000 series mechanical keyboards. Shining alongside the updated RK-9000 is the world first dual LED backlit mechanical keyboard, HELIOS RK-9200. In addition to the popular mechanical keyboards, Rosewill will be displaying different networking solutions from wireless to powerline. On display will be the T900N, featuring dual band Wireless N connectivity and an easy setup for both beginners and advanced users. Alongside Rosewill’s IT products, they also offer a diverse product line of consumer electronics that will not disappoint.

Exclusively at Rosewill’s booth; will be one of the most amazing systems you will see on display at Computex 2013. The system is built with Rosewill Rise. It will feature dual Intel E5 Xeons, 3-way SLI EVGA GeFORCE GTX TITAN graphics cards, and 2 280 mm water cooling units all in a nice package featuring the ultimate high end components. Also, on display will be the newly released Rosewill THRONE gaming case featuring a stunningly beautiful custom paint design titled, THRONE Air Runner, with golden paper flakes by a world-renowned designer whose designs have won global accolade. Not only is this the world first debut of the custom painted THRONE Air Runner, it is also the very first custom painted PC Case for the designer. You cannot see it anywhere else in the world.