As with any confidential agreement, there are certain things we can do just short of revealing any benchmarks before Intel is ready. And, that means we can’t show you the GIGABYTE P55 line up so elegantly on display. JUST KIDDING! Of course, we can! 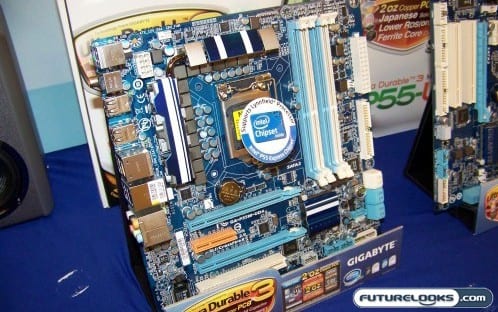 One of the four motherboards on display is a rather capable GA-P55M-UD4 micro-ATX motherboard that looks anything but micro. It boasts 12-Phase VRM which means there’s some overclocking headroom, plus a full gamut of features normally found on a full size ATX including CrossfireX and SLI. This is reminiscent of the no holds barred ASUS ROG Rampage II Gene X58 mATX board that we previously reviewed. 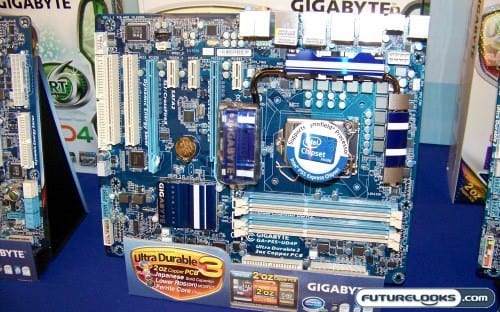 Next in line were the GA-P55-UD4P and UD5P. The UD5P model offers 12-Phase VRM as well as a third PCI-Express x16 slot beneficial to extreme gamers pushing beefy graphics cards. The UD4P offers basic, yet ever capable, SLI and CrossfireX support which should be popular with gamers on a budget. However, in either case, the features continue to be plentiful offering the best bang for buck if you can’t afford this next board in the lineup… 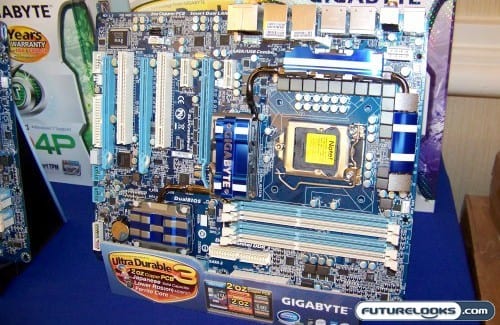 As with any new chipset launch there needs to be a flagship, and this is GIGABYTE’s answer. I seem to recall angelic voices coming down from the heavens as I approached three different GA-P55-UD6 systems.

This board offers a couple extra useful features which includes 24-Phase VRM. This is the platform of choice if you are an Ultra-Durable extreme enthusiast who wants to squeeze every possible drop of performance from your shiny new Lynnfield processor. 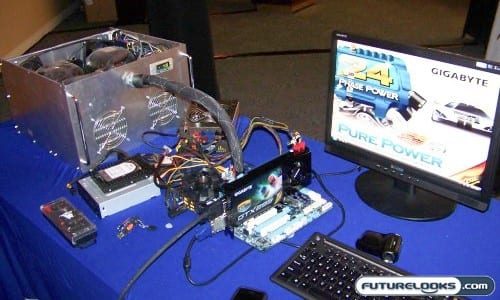 One UD6 system was connected to a Phase Change cooling system belonging to Fugger, who is a World Champion Overclocker and participant in GIGABYTE’s own GOOC Overclocking events. With this setup, he was able to push the Lynnfield to frequencies well beyond many Nehalem processors. He was also running some of that brand new Kingston DDR3 Dual Channel HyperX Memory that will be launching very soon at some super fast frequencies.