The objective is simple. Overclock the hell out of the systems as far as you can, successfully run the Super Pi benchmark, and report your calculation times to a judge. There were many a blue screens during these two hours as the competitors patiently try out adjustment after adjustment looking for the best possible performance. 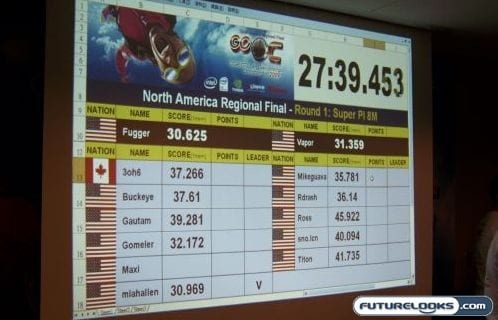 The battle was very, very close during the first and second hour. But, as the overclocking became more aggressive, Fugger’s 30.625 was the time to beat. Miahallen produced the fastest time at 30.969 seconds with Gomeler coming in close with 32.172 seconds. It seemed that Miahallen’s processor was more than willing to work, but not the system’s memory settings.

The 3DMark competition is a little different in that you need to produce a 3D stable overclocked system. This means finding the right CPU and memory frequency that’ll compliment the LN2 cooled 260 GTX video card which is also insanely overclocked. Finding that right overall configuration can be tricky and can test even the most patient and experienced of overclockers. 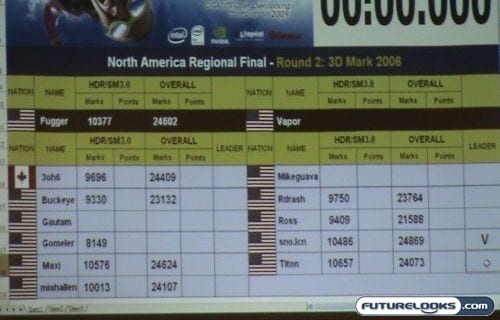 Ultimately, Sno.Jnc won the 3DMark competition producing 24,869 overall marks which was enough to beat Fugger with 24,502 marks. Sno.Jnc said he attributed the bulk of the results to the GTX 260 video card which just happened to be an excellent card for overclocking. Interestingly, this was Sno’s first experience with overclocking the new Intel I7 system. It was an impressive outcome for someone with the odds stacked against him. 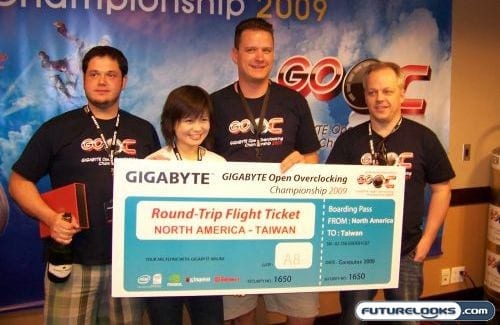 After the scores and results were tallied by the judges,  first place went to Miahallen (middle), followed by second place Sno.Jnc (left), and third place Maxi (right). Both Sno and Maxi received an impressive stack of prime computer hardware for building their own elite Intel I7 system. They also earned bragging rights and are considered serious contenders to be rekoned with at future events. We’ll undoubtedly see more of these two gentlemen especiatly now that Sno has his very own I7 system and will have a chance to learn how to make it go even further. 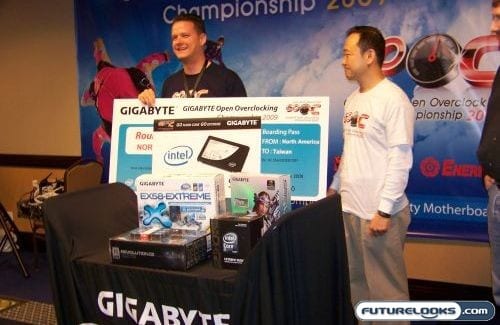 Miahallen won the big prize! He got the elite stack of gear which included every top of the line I7 component available from each of the great event sponsors. He also secured a spot at the overclocking championship in Taiwan during Computex 2009 this June where many of the world’s best overclockers will amass for yet another amazing event. Are you ready to start overclocking?

We’ll be back again with more answers and upclose interviews from the contenders who offer up the reasons for why they do it. If you’re not overclocking even a little, this just might be the encouraging words you need to hear to get you started. In the meantime, check out the photo gallery on the next page and stay tuned!