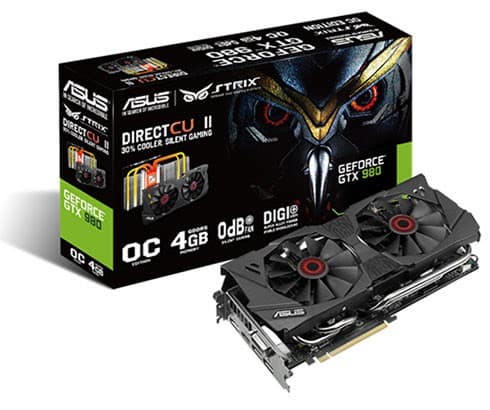 Joining the STRIX tuned DIRECTCU II cooling solution, ASUS also adds their Digi+ VRM technology to the mix. The STRIX GTX 980 gets a 10 phase design, while the STRIX GTX 970 gets a 6 phase design. In conjunction with the cooling solution, ASUS claims that this GPU is 30% cooler and 3x quieter than NVIDIA’s reference design solution. And to further add to the performance of the card, the ASUS GPU Tweak software allows you to push the card even further in terms of overclocks.

The ASUS GTX STRIX GTX 980 and GTX 970 are shipping today and will be hitting shelves immediately. The GTX 980 will hit an MSRP of $559 US while the GTX 970 will settle in for an MSRP of $339 US.  Further details can be found in the press release below. And of course, make sure you come back for our review of the NVIDIA GTX 980, as we take it through its paces on today’s Triple A gaming titles.

Play League of Legends® and StarCraft® in silence!
The STRIX GTX 980 and STRIX GTX 970 both come with the ASUS-exclusive DirectCU II cooling technology. With a 10mm a heatpipe to transport heat away from the GPU core, operating temperatures are 30% cooler and 3X quieter than reference designs. Efficient cooling and lower operating temperatures allow STRIX graphics cards to incorporate an intelligent fan-stop mode that can handle games such as League of Legends1 and StarCraft1 passively, making both cards ideal for gamers that prefer high-performance, low-noise PCs.

Real-time monitoring and control with GPU Tweak software
The STRIX GTX 980 and STRIX GTX 970 come with GPU Tweak, an exclusive ASUS tool that enables users to squeeze the very best performance from their graphics card. GPU Tweak provides the ability to finely control GPU speeds, voltages and video memory clock speeds in real time, so overclocking is easy and can be carried out with high confidence.

GPU Tweak also includes a streaming tool that lets users share on-screen action over the internet in real time, meaning others can watch live as games are played. It is even possible to add a title to the streaming window along with scrolling text, pictures and webcam images.

AVAILABILITY & PRICING
ASUS STRIX GTX 980 and GTX 970 graphics cards will be available at ASUS authorized resellers and distributors starting on September 19, 2014. Suggested US MSRP pricing is $559 for the STRIX GTX 980 and $339 for the STRIX GTX 970. For additional product information and specifications please visit: www.asus.com
1 Specifications, content and product availability are all subject to change without notice and may differ from country to country. Actual performance may vary depending on applications, usage, environment and other factors.