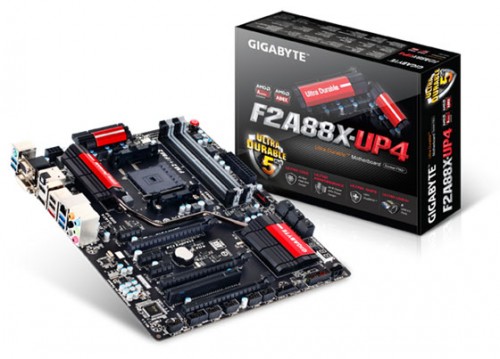 The GIGABYTE G1.Sniper A88X announcement a few days ago was great, but GIGABYTE is not stopping there. They intend to fully support the upcoming AMD Kaveri APU with an entire lineup of new products. This is good news for AMD fans and great news for AMD overall.

There are seven new motherboards in the works for the AMD FM2+ socket by GIGABYTE, but we have only seen 2 so far. The first ever G1.Killer board, the G1.Sniper A88X, and the top-tier GIGABYTE G2A88X-UP4. This time around they will even adopt the color scheme of AMD for a little added flair which I hope continues with the other boards as well. The new line up is now stacked with the following players…

I know everyone wants to talk about the rumors that have been circulating around recently. I may even add my two cents later. But for now lets just enjoy great new motherboards that are confirmed and coming from GIGABYTE. I can’t wait to get my hands on these boards.

There are still no estimated MSRPs for many of these boards, but we’ll let you know as soon as we find out. The full press release is posted below.

GIGABYTE A88X motherboards feature a number of features and technologies and also include the first AMD G1-Killer gaming motherboard, the G1.Sniper A88X which includes GIGABYTE AMP-Up Audio, a range of advanced audio technologies that are designed to give audio enthusiasts and PC gamers more control over their motherboard audio than ever before. GIGABYTE A88X series motherboards also offer unique GIGABYTE features, including UEFI DualBIOS™, Digital Power delivery, as well Triple Display support.