Search
Home
Miscellaneous
Prev3 of 3Next

What About The Tablet Itself?

The best built part of this package was the tablet. It was well weighted, never slipped and was very sturdy. I’m also pleased to report that the tablet surface has put up well with my chicken scratching and looks as good as the day that I started using it. I’ve only used a microfiber cloth to clean it and after abusing it for a few weeks, there has yet to be a scratch developed in the surface.

When setup properly to the aspect ratio of the screen, the tablet was like a natural extension of the screen itself. I also really liked how I could program the “hot cell” buttons to take on functions and shortcuts that I normally use in addition to standard file commands.

Although the resolution of this surface isn’t quite as high as the INTUOS units from WACOM, it still held its own with its 2000 lpi surface and 1024 pressure points. I was able to broaden and lighten my pen strokes with ease and it really felt fairly effortless to write on. I would describe it like drawing with a thin felt marker while the higher end WACOM tablets like the INTUOS feel more like a fine tipped felt pen. It’s definitely not bad and it’s worlds better than trying ot use your mouse to try to trace fine lines and draw things with. 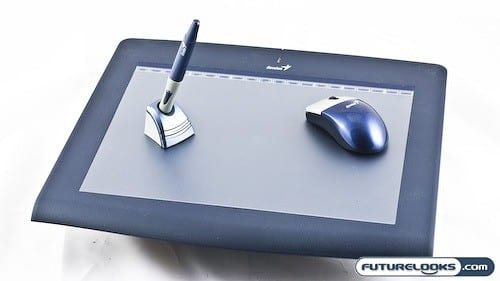 The Genius PenSketch 9×12 Tablet was a real surprise to me mainly because I didn’t expect much from it. At about a third to a quarter of the price of its high end competitor, the WACOM INTUOS 9×12, it’s nearly impossible to fault it especially at such an affordable price. It was a lot of fun to use and really improved my Photoshopping. It was even useful in programs like Soundbooth where it was necessary to trace around noises to remove them from audio tracks. The durable surface really stayed put and the resolution and number of pressure points on the tablet were sufficient for my amateur needs.

Although there is a lot to like about this tablet, there were some minor annoyances. I really disliked the button on the stylus as I would always end up hitting the wrong portion of the button. the holder was also far too light for its own good. Combined with the lack of rubberized feed for traction, I’d always have to end up looking for it when I needed to put my pen away. I also discovered that build quality was a little suspect but considering a WACOM stylus costs nearly half the price of this tablet, I can somewhat overlook that. If they could tweak it a little and add an eraser on the end, I think it would be a great little piece. Other wish list items included buttons on the tablet itself and maybe a back and forth button the mouse to make it a little more useful as a stand alone mouse. 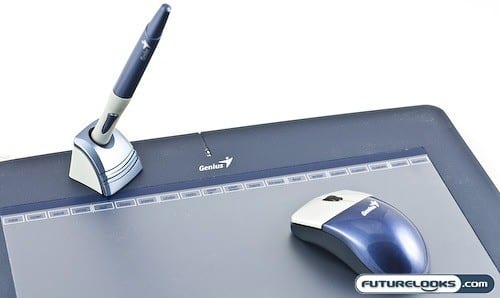 Overall, at around $125 – 150 bucks on the street, it’s probably one of the best values in a graphics tablet out there and the benefits definitely outweight the little annnoyances that I found. It’s pretty much a no brainer for anyone that wants to start getting serious about Photoshop or other graphics programs.

Help Improve Our Reviews By Leaving a Comment Below!