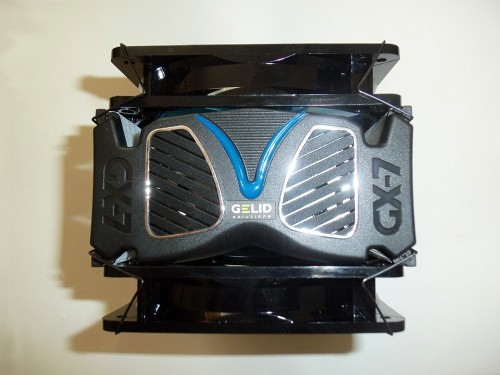 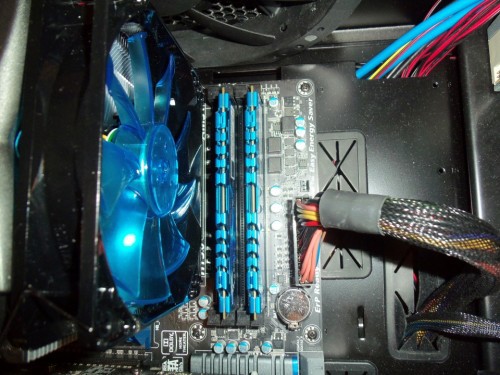 Another thing you should note is the GX-7 with a front mounted fan does not obstruction RAM heat spreaders. The cooler’s heatpipes sit the fins high enough to hover over most RAM coolers. In addition to that,  the fan stops just millimeters short of the first RAM slot on my motherboard. While it may look a little cramped, there is actually just enough space to install the RAM while the cooler is in place.

In order to test the Gelid GX-7 CPU cooler, the following software was used to produce a load that the cooler would have to fend off…

Testing will be done in this closed system with the stock fans set to low speed. This should reflect a real world scenario as I am after the results that users should expect when used in their cases. As this will be for all coolers tested, any help or hindrance provided by the Rosewill Thor V2 will be the same for all three tested coolers. Keep in mind these results may vary with your system configuration.

Now we can get into the primary function of a CPU cooler which is heat dissipation. I will be using the temperature numbers from AIDA64 Extreme. Its numbers were identical to the OCCT software, but 11ºC lower than the numbers shown in AMD Overdrive 4.0.5. First let us look at all the coolers at stock speeds for the FX-8150. 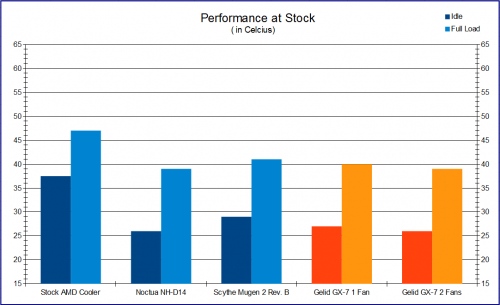 As you can see the Gelid GX-7 with one fan falls between my Mugen and the Noctua NH-D14. Installing a second fan in the pull position does improve performance up to 2ºC. This brings the Gelid GX-7 to the same performance level as the Noctua NH-D14 which is more fair as the NH-D14 uses two fans as well. Lets see what happens when I turn the dial up to 10 on my FX-8150. 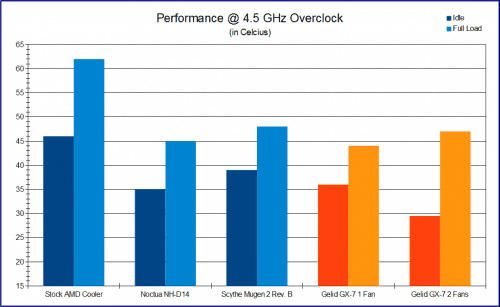 First I would like to say I believe the temperatures in AMD Overdrive 4 are more accurate. During testing with the stock cooler, the FX-8150 only held the 62ºC for a few seconds before it was forcibly down clocked by the built in thermal protection. I honestly should count it as a failure, but I wanted to just show why overclocking requires an aftermarket cooler.

These results are mostly determined by the top speeds of the fans each cooler comes with. The Noctua NH-D14 maximum allowed fan speed is 1200 RPM, the Mugen II’s is 1300 RPM, and the GX-7 fan goes up to 1800 RPM. There also seems to be some differences in the PWM design. I attached the secondary fans of the NH-D14 and GX-7 to my motherboard’s system fan PWM header which resulted in the D14’s fan idle speed of 350 RPMs while the GX-7’s fan was 950 RPM’s.

You will notice performance is better with only one fan installed on the GX-7, but this was an error. After double checking this anomaly and realized the secondary fan was not changing speed, I figured out this was because the system fan PWM header is regulated by the motherboard’s temperature which was held constant by the Thor V2. This can easily be corrected with a Y Spitter and attaching both fans to the 4-pin CPU header. I did test this and it brings the performance closer to the Noctua NH-D14, but I did not include those figures since you would have to buy a Y-Splitter separately to achieve those results.

This section I would like to a litter differently than just throwing around numbers and showing your charts. I want to simply discuss the GX-7 and its noise level from the perspective of a daily user. I will still including tested numbers as a point of reference.

A PC is only as quiet as the loudest fan being used. This is usually a case fan as they are closer to holes in the case where noise can escape. To me this means the best component fans are those that produce less noise than your particular case. If you recall from the review of the Rosewill Thor V2, with the fans on low it produces approximately 36 dBA of noise. Even with the FX-8150 overclocked to 4.5 GHz and two fans installed on the GX-7 I could never hear it above my case at idle. There was a distinct difference in the noise at full load, but it was not loud enough to be distracting at only 42 dBA.

As I stated before, I did the test on the GX-7 with a Y Splitter. This changed the entire attitude of the cooler as both fans would idle at around 600 RPM’s and both would speed up during full load to around 1500 RPM’s. This did push the noise level up to around 47 dBA which is just loud enough to notice, but only when the FX-8150 is overclocked. In it’s stock configuration with only one fan and the FX-8150 at stock clocks, the GX-7 was never loud enough to overpower the case fans. 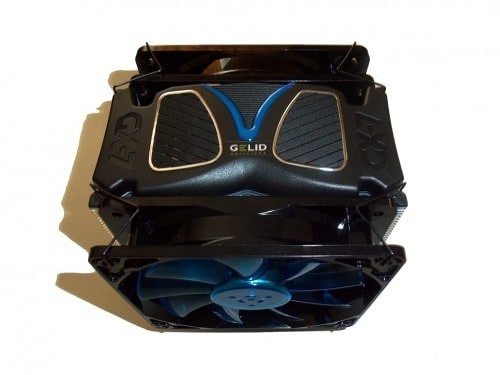 Let me start off by saying I am impressed with the performance of the Gelid GX-7. This cooler is available for $64.99 US or less  and manages to come in just short of the current king in our test scenario: The Noctua NH-D14 at $89.99 US. This is when fully configured properly with two fans. The only issue with this feature is that the GX-7 does not come with a Y-splitter which we found was really needed to give this cooler the performance it deserved. My results showed just connecting it to the system PWM fan header will actually attenuate air flow when at full load on an overclocked system.

While raw performance is pretty good, the fact this is achieved with a much more compact design is what pushes it over the top for me. Unless you are using RAM with extremely tall heat spreaders,  you don’t have to worry  about obstructing the RAM slots with the Gelid GX-7, making memory upgrades down the road very easy. The only thing that wasn’t totally effortless was the installation. If you have tiny hands, you might be OK installing it in the case, but we did find that the effort of removing the motherboard from the case made it easier.

If you are in the market for a high performance cooler, but don’t have the money to spend on something like the top tier Noctua, then you will not be disappointed with the Gelid GX-7. Just remember to pay that extra few dollars for a 4-pin Y splitter if you decide to go with the two fan configuration for your overclocking needs. Not to mention, it’s a whole lot smaller than many monster coolers, making your LAN party rig a little lighter and less likely rip the socket off your motherboard. What more could you ask for from a CPU cooler?