Does the name “GALAX” sound familiar? How about the name GALAXY? After dropping the “Y” last year, and consolidating with another NVIDIA graphics partner, KFA2, the new company is slowly trying to get back into the North American market, and the hearts and minds of the very important gamer market. The company was known in the past for their crazy interpetations of NVIDIA GPUs, complete with over the top heatsinks and overclocking capability. Now they plan to invade the market with a line of GALAX Gamer Series SSDs.

The new GALAX Gamer Series SSDs use a new “Heracles” SATA III controller, developed in conjunction with JMicron Technology. Unfortunately, they’ve mentioned nothing of performance numbers. However, they do mention a SLC Cache Auto-Release technology that aims to even out the performance of their SSDs, instead of having them hit max speeds and rapidly drop off, pointing at the performance variance of competing products on the market. The drive is supported by fairly standard wear leveling and ECC capabilities, with an estimated 2 million hour lifespan.

The drives also boast high energy efficiency under load. This could be an advantage for the gaming notebook market, or not at all as most users gaming on their notebook, would be plugged into the mains anyway. 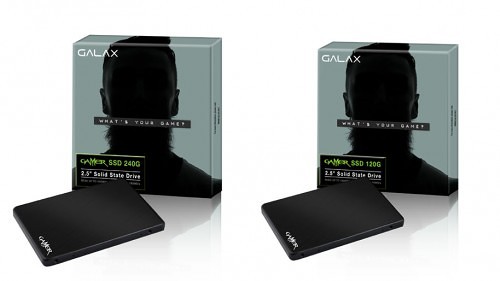 The company will be releasing two units in a 7mm height, which should let it fit in both notebooks and desktops easily. However, only a 120GB and 240GB unit will be available at launch, with a retail price of $59.99 US and $104.99 US respective. The warranty is 3 years with registration.

The GALAX Gamer Series SSDs are currently available on their e-store in North America, but should be hitting other e-tailers soon. Full press release is available below.

GALAX, a leading manufacturer of high-end PC gaming hardware, announced today the global launch of the new Gamer Series Solid State Drives, powered by the advanced Heracles SATA III controller developed in collaboration with JMicron Technology and specially designed to meet the intense performance requirements of next gen gaming. GALAX Gamer Series SSDs are made with high-end desktop and notebook PCs in mind and excel at both the random read/write speeds essential for responsive gameplay and sequential read speeds for the fastest possible load times.

The new Heracles controller improves gaming, and in fact the entire computing experience with a variety of unique features and advancements. For example, many SSDs have fast maximum speeds but can only maintain them for a short while before performance begins to drop, but Heracles solves this problem with SLC Cache Auto-Release which streamlines the data pipeline and prevents cache bottlenecks. This effectively eliminates the performance drops prevalent in competing drives and lets GALAX Gamer Series SSDs maintain their maximum speed indefinitely. In addition, high physical durability, built-in wear leveling and Error Correct Code (ECC) ensure data remains secure and transfers reliable even after years of heavy use.

The Gamer SSD’s 7mm ultra slim form factor and extreme energy efficiency also makes it ideal for even the lightest of laptops. Demonstrations have shown the GALAX Gamer Series to have among the lowest power consumption of any drive in their class during even the most intense activity, with power usage practically nil during idle. Upgrading a laptop with a Gamer Series SSD is a simple way to improve both gaming performance and battery life simultaneously.

GALAX Gamer SSDs are currently available in 120GB and 240GB capacities at leading retailers and etailers worldwide, direct from GALAX at www.galaxstore.net in North America.
[/hide-this-part]