Although the 2009 E3 Expo seems completely obsessed with the games, the show also brought forth some interesting products to enhance that gaming experience. Some of these products include headsets, gaming monitors and gaming laptops. We check in with Turtle Beach, Tritton Technologies, NEC and Alienware to see what’s new and what gamers should be spending their hard earned dollars on. 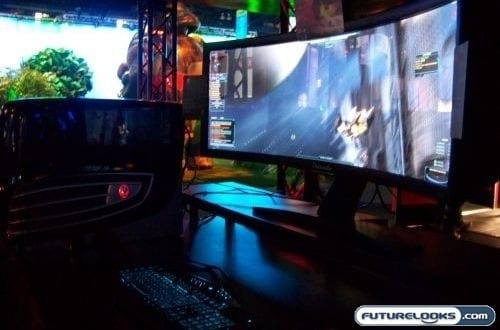 One of the gaming stations also had Ostendo’s new CDM43 monitor powered by yet another Alienware gaming system. It’s their newly announced 43″ curved monitor available sometimes in July of 2009. The monitor has a two fold purpose: It gives you an utterly amazing gaming experience and it also makes your friends extremely jealous!

Check out the video:

Originally seen at CES 2009, the monitor needed a few tweaks and it looks like those tweaks have paid off in a vastly improved. One of the things some people notice at an angle are the seams between screens. However, this is completely invisible when positioned anywhere in front of the 43″ span making the seams a moot point. She’s one curvaceous beauty!

I’m no stranger to Tritton Tecchnologies. At CES 2009, I experienced a good thirty minutes of intense gaming wearing one of their headsets. In fact, there’s a good chance you’ve seen their AX Pro 5.1 Headsets being used in the televised World Cyber Games: Ultimate Gamer Challenge where gamers compete in a vast array of video games for the right to be called champion Since everyone loves a great audio experience.

At the show, we had a chance to check out Tritton’s new AX 720 and AX 900 Headsets to see what all the “noise” was about. Check out our interview and new product walkthrough below:

The AX 720 offers Dolby Digital 5.1 performance and completely supports Mac, PS3, PC, and Xbox including voice compatibility. The back of the AX 720’s base unit allows for an array of audio features that can also support Mp3 players or even iPhones.

The AX 900 offers the same audio features and support as the AX 720 except for the fact they’re wireless. These complete Tritton’s arsenal by giving the Nintendo Wii fans a superb option since wires aren’t any fun while trying to hit one out of the park. The color also matches. How cool is that? 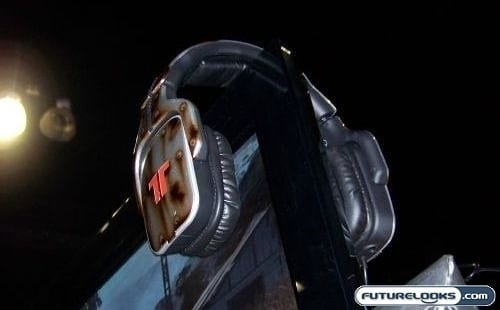 Also on display were the new AX Pro Headsets feature the custom air brushed themes. While they may not be news to you, you’ll be pleased to know that the units have finally shipped and you’ll be seeing them on the shelves (and our test bench) in the immediate weeks to come. Judging by my experiences thus far, we expect them to give any other gaming enthusiast head sets a run for their money.