Just for confirmation, I ran Aliens Vs Predator benchmarks and Unigine Heaven 3.0 benchmarks both of which are DX11. Screen resolution was 1440 x 900. Unigine was using 8x/8x AA/AN sampling with normal tessellation. 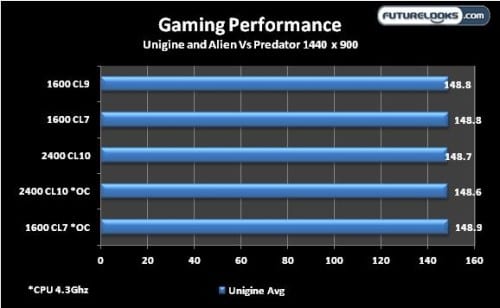 Memory frequencies alone had no effect on the frame rates. The video cards are doing all the work. Depending on the game title, overclocking the CPU can typically creates some gains. If you’re just gaming and have no plans to push your CPU and memory in unison, you’re better off buying some TridentX 1600MHz memory, and saving the money for another game title.

Since we indeed live in a media age, I used the Graysky 4.0 H.264 benchmark readily available for free download for those curious about their own system’s performance. Let’s see how the TridentX 2400MHz does compared to stock frequencies and timings. 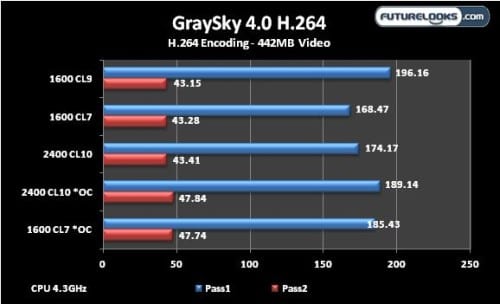 There was a slight gain when running 2400MHz. There was also almost no performance difference between CAS7 and CAS9 performance. One reason for this is that the CPU is very efficient using its own cache and doesn’t often have to go hunting for RAM access. Therefore, there really isn’t much of a need for tighter timings in kits these days.

I’ve often wondered if memory influences a system’s overall performance in PCMark7 which measures such things like media, web and calculation. For this test, I selected productivity and computation tests in order to isolate any gains from memory frequencies. 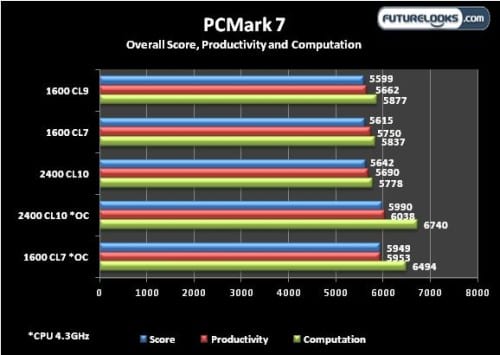 CAS latency and CPU frequency benefit the synthetic benchmark. Higher latencies take longer to read and write program benchmark data to and from the RAM while tighter timings do it quicker. When the TridentX 2400MHz is paired with a 4.3GHz overclock, it does much better.

I’ve used this public benchmark before to show variances in memory timings and CPU frequencies especially when overclocking. Let’s see what timings and frequencies make the biggest difference. 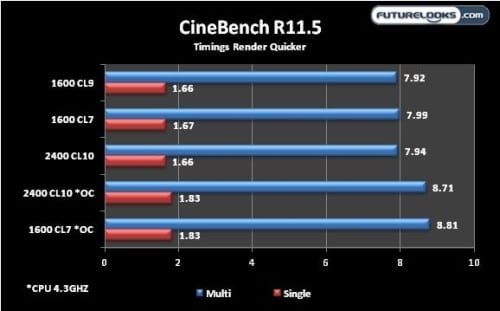 When it came to scoring, memory timings made all the difference over frequency and heavily influenced the processor performance. Using the TridentX 2400MHz at 1600MHz CAS7 provides the best overall system performance even if not overclocking. 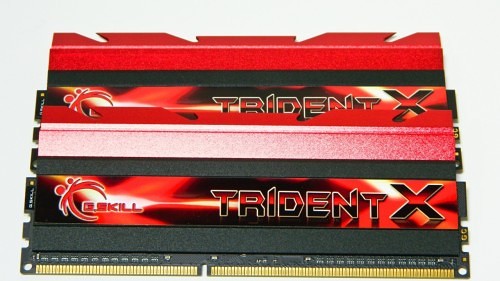 Every time a new processor launches, new supporting RAM also launches to the corners of the tech world. And, each time that happens, I’m fortunate enough to get the chance to validate many different make and model memory kits. As it stands, the G.SKILL TridentX X 2400MHz 8GB DDR3 dual channel memory kit is the latest to earn a spot on my extremely recommended list in support of Intel’s Ivy Bridge processors. The TridentX X’s XMP settings worked on any of the ASUS, GIGABYTE, MSI and ASRock motherboards.

The great things about working with the 2400MHz TridentX X is that it looks great, has a removable red fins making it an adaptable low profile kit, matches 2400MHz specs and can be clocked down with much better timings that you just can’t get from budget or lower frequency modules. As far as overclocking memory goes, the TridentX X 2400MHz is stable and all around ready to rock. If this sweet red X fits your high performance system, you can find it for between $100 to $115 at the usual places like NCIX or Newegg.

Overall, I’d recommend these modules to anyone wanting the option for very tight timings or higher clock speeds, and also give it a distinction of being one high performance product.