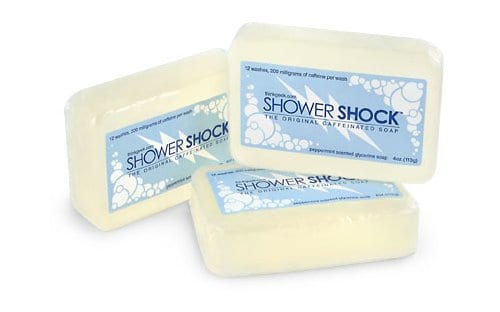 Ah yes caffeine, the true opiate for the gaming masses. ThinkGeek has a whole category in their store dedicated to sale of every delivery system imaginable for this psychoactive stimulant drug, and one the more popular caffeinated products in their catalogue is Shower Shock Caffeinated Soap. Not only does it encourage bathing in the gamer and geek set alike, but it provides a further incentive in that it may just wake you up!

The product has been featured on some big name TV networks saying how much it works, that is until the CBC show Street Cents ruined everything by bringing science to the party. Their subjective testing noted that none of their staffers really felt any effect from the soap and the “sciencey” bits showed that there wasn’t even a trace of caffeine in their blood streams; something you definitely do get with coffee.

Their final verdict was a little harsh, as I would still say this is another gift to have a good laugh over. After-all, there’s no better way to say Merry Christmas then to say “take a shower you stinky bastard” with your gift of choice. 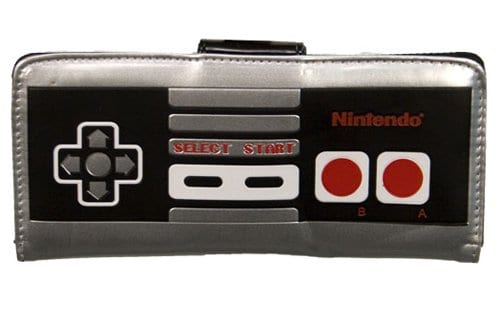 While we’re on a retro kick, we might as well look at one of the many products that have been made to look like the original Nintendo Entertainment System controller. I first came across this product when I did a Google search for gamer gifts in prep for this article. Though I had most of my picks…picked, I needed one more product to round off the list. This was that product; it seemed to call out to me from the virtual ether. Basically it’s a chequebook, shaped like an NES controller. There’s not much more that can be said about it.

At least you’d think there wasn’t much more that could be said about it, since in this article there’s plenty more that can be said about it. The Nintendo Controller Chequebook Wallet manages to bury the needle on the Retro Meter. It combines retro gaming with retro financial transactions into one big retro black hole. The product is wholly appropriate in that those who remember what the NES controller was actually like will be the only ones old enough (yes at age 27 I’ve managed to call myself old) to remember what the hell a cheque is.

Some people still use cheques to pay for infrequent charges like rent, but like the vinyl record their use has dropped in favour of a digital method of delivery. On the positive side writing a cheque will be slightly less mundane with this cheque book. Maybe you can write a cheque when you purchase this gift, though I doubt it. 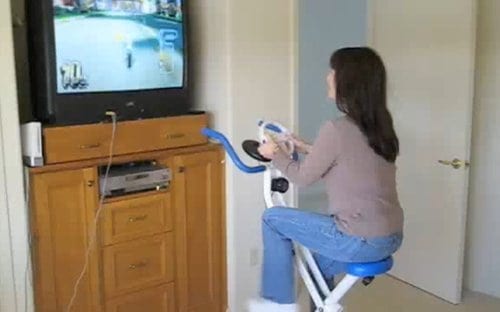 Now if the GP2X Wiz is the reasonable item to consider for your gamer, the Fun Xercise Bike is the little more crazy option. This device basically takes the dial on the concept behind the WiiFit balance board, and cranks it to 11. The result is an exercise bike that can interact with your Wii in many ways. How many ways is hard to determine, as information on this product is hard to come by.

The product home page has plenty of testimonials, and even some curious demo videos, but some backup to their many claims seem to be non-existent. Still the concept behind this…exercise bike should finally put to rest all those complaints about gamers not getting any exercise. At the very worst it could end like any other exercise bike, as a curiously shaped clothes hanger that sits in the corner of your bedroom.