The Evil Sticks in Action

During my time at the E3 Expo back in June, I had the opportunity to visit with Microsoft and check out some pretty awesome games. I also had the chance to challenge American Street Fighter IV champion Justin Wong to a match. Check out the video below!

This was at the Evil Controllers booth on the showfloor, giving me an early glimpse into what the Evil Sticks could do. Under immense pressure, I pitted Blanka against Justin Wong’s Balrog attack, but came up short. However, of the all the people to get pwned by, at least I got pwned by the best. I could say the controllers helped a little but nothing can help you against one of the best in the world. Not even our excellent Street Fighter IV Strategy Guide could provide any relief.

You Want this Red Ring of Death? 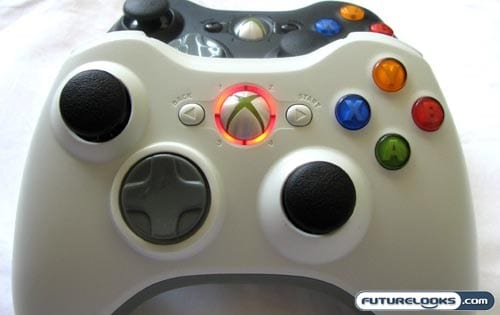 The Red Ring of Death (RROD) can strike fear and dread in the hearts of Xbox 360 owners all around the world. If you turn on your favorite gaming console and see that the light is red rather than green, it means that your Xbox is toast. That’s not a good thing.

As an almost tongue-in-cheek kind of modification, Evil Controllers is also able to replace the LEDs that are housed inside of the Xbox 360 controller. Modifications are about more than just performance; they can add some personalized style as well.

The white Xbox 360 controller was outfitted with a set of red LED lights, whereas the black one was provided with a set of blue lights. You can do the reverse, if you prefer, when you place your order through the Evil Controllers website.

Just a Little Dash of Evil

As I’ve mentioned several times in this review, controllers personalized by Evil Controllers will look a lot like their OEM cousins at first glance. Where can you find their branding? It’s subtle, but it’s there. 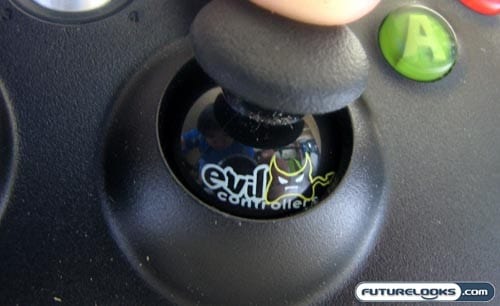 Located on each Evil Stick is a small stamp with the company’s logo. This isn’t on the thumb portion itself, but is rather on the rounded joint underneath it. You can only see it when you point the thumb stick upward. Nicely done. 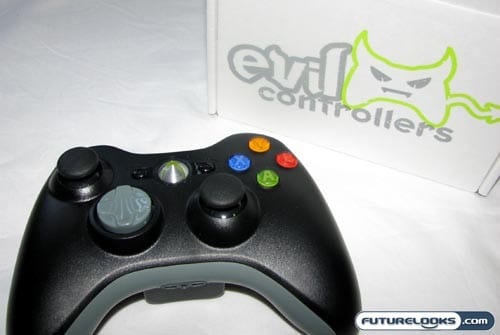 Until Microsoft further opens its licensing for third-party controllers, the modifications from Evil Controllers could be your best bet for enhancing the gaming experience. It doesn’t matter if you’re playing casual XBLA titles or hardcore first-person shooters, because these relatively minor mods can be quite valuable.

The Ring of Light mod is great for customizing the look of your controller, but the Evil Sticks are a nice little upgrade as well. The added grip makes for a more comfortable and non-slip experience, especially for gamers with sweaty palm syndrome. It’s not a radical difference, like the rapid fire mod, but it’s a good one.

If you’d like to order a brand new controller, Evil Controllers can pre-install the Evil Sticks for you and ship a completed unit. Alternatively, you can order the Evil Sticks on their own ($20) and install them yourself.