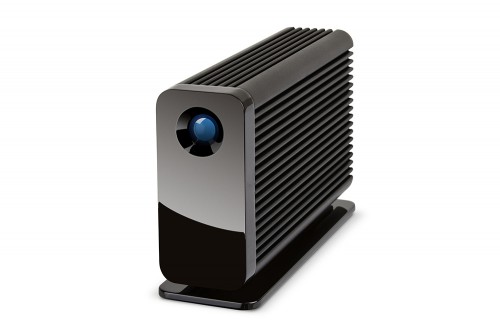 It is now a fact of CES 2014 that some company will attempt to take the title as the fastest or most powerful product in a given market. It is usually RAM manufacturers duking it out, but this year we have something different. LaCie claims ownership to the crown of having the fastest portable storage solution in the world. And they might have a case.

The new LaCie Little Big Disk featuring Thunderbolt 2 (LBD2) is the drive that has claimed the title of fastest portable storage with transfer speeds up to 1375 MB/s, using Apple’s new Mac Pro. This raw speed is achieved with a pair of 500 GB PCIe SSD in RAID 0 configuration and Intel Thunderbolt 2, housed in the sleek, black, all aluminum enclosure. If you need to stream 4K or 3D videos on the go, this is what you need to do it. It is fully capable of capturing 4K video (250 GB of information) and then transferring it to another computer in under 10 minutes.

When we first saw the claim of “world’s fastest portable storage solution”, we though it was a gimmick to get attention. You know, beat the competition by a few MB/s to take the crown. This on the other hand blurs the line between NAS and portable HDD.

As featured in our CES 2014 video coverage…

January 6, 2014 — Today, LaCie announced the Little Big Disk Thunderbolt™ 2 at the 2014 International CES® Show. The new LaCie Little Big Disk, one of the first storage solutions enabled by Thunderbolt 2, is the fastest portable storage solution on the market. It delivers speeds up to 1375MB/s, which is several times faster than any mobile USB 3.0 hard drive. In addition to its industry-leading performance, LaCie worked with designer Neil Poulton to bring a cutting-edge look to the product. For the first time, the Little Big Disk features a sleek, black finish to its fully aluminum enclosure.

Perfect for no-compromise video professionals, the new LaCie Little Big Disk permits streaming and editing of 4K or 3D video while in the field – a giant leap forward for mobile post-production workflows. The LaCie Little Big Disk is powered by a set of 500 GB PCIe Gen 2 SSDs in RAID 0 to create a perfect blend of performance and capacity even in the most demanding workflow.

With the fastest SSDs on the market, LaCie optimized the Little Big Disk’s interior design to improve the cooling efficiency, while keeping it as silent as possible. By incorporating a thermoregulated fan, it only turns on when necessary and produces nearly zero noise. As a result, the LaCie Little Big Disk delivers the best possible performance without disrupting the creative professional workflow.

“It’s no small feat, incorporating the most advanced storage technologies into a portable product,” said Erwan Girard, Business Unit Manager, LaCie. “With the Little Big Disk, LaCie engineered a remarkably powerful product to fit in the palm of your hand. Something no one else in the industry can claim.”

At CES, LaCie demonstrates how the Little Big Disk lets videographers work directly from RAW files, getting full quality from footage and seeing the edits in real-time. LaCie will show how professionals can capture 250 gigabytes of 4K footage on a Little Big Disk in the field, and then transfer the content to the post-production team in under 10 minutes.