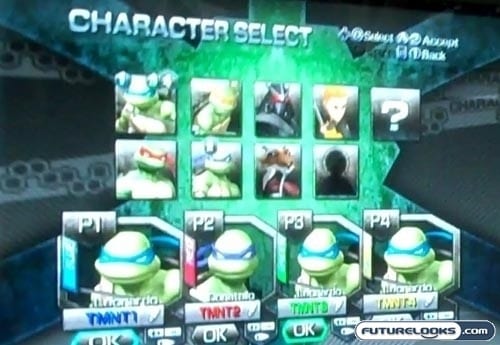 Did you like playing Super Smash Bros. Brawl on the Nintendo Wii? Do you like fighting as a set of four green ninjas who dwell in the sewers beneath the city? Well, it seems that you’re about to get get the best of both these worlds, because TMNT Smash-Up for the Nintendo Wii is essentially the Teenage Mutant Ninja Turtles version of Smash Bros. The similarities are quite startling.

Just like Smash Bros, you get (up to) four characters on a 2.5D battle arena. Attacks are generated from just two buttons (A and B), and pressing them together lets you grab and throw your opponents. Everyone gets a life gauge rather than the damage percentage that you see in Smash Bros, but you can still die by falling off the edge of certain stages. 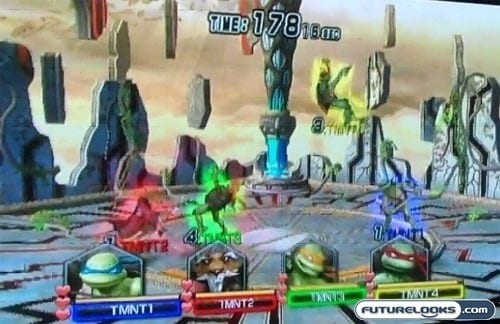 For the demo version in the Ubisoft booth, we were able to choose from Leonardo, Donatello, Raphael, and Michelango, as well as Splinter, Shredder, and April. There was one additional spot that looks like it will be filled by an unlockable character, but I certainly hope that the roster will have more than just eight characters. Where are Bebop and Rocksteady? The Rat King? Casey?
Look for TMNT Smash-Up exclusively on the Nintendo Wii later this year.

I was quite surprised to see this game over in the Ignition Entertainment booth (which is representing SNK Playmore as far as I can tell). It’s been a very long time since we’ve seen a new Samurai Shodown game, because the majority of its characters have been happily ported over to the King of Fighters franchise along with the rest of their SNK stablemates. This is the same reason why we don’t see any new Fatal Fury games. 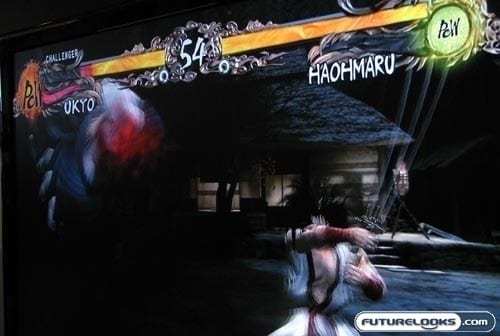 Well, Samurai Shodown is indeed back and everyone is once again equipped with a variety of sharp-edged weapons. This is the same kind of appeal that you’d get from the Soul Calibur franchise, but there is no magic involved here. You don’t get a character like Nightmare with a flaming blade. Instead, the attacks are much more realistic, just as you’ve come to expect from Samurai Shodown.

Unlike the 3D arena that you’d get in a Soul Calibur game, Samurai Shodown: Edge of Destiny plays out as if it were a traditional 2D fighter. The graphics, however, are fully three-dimensional and SNK Playmore is boasting some incredibly gorgeous backgrounds in here as well. That’s the good news.

The bad news is that there are no explicit plans, as far as I know, to port Samurai Shodown: Edge of Destiny to the home market. It is being planned for release in North American arcades this year, so we’ll have to wait for the period to draw some blood before we can hope to do the same from our living rooms.