Keyboards are a staple to any computing setup. Mechanical keyboards are typically preferred by the majority of PC gamers. What if you play your PC games in front of a large screen TV? You are then attached to your PC by a wire, but what if you could remove that wire and sit on your super comfy couch and game from there instead? Would you? Perhaps you are more of a minimalist and like to keep your desk area neat and tidy but also cable free? Previously, there had not been much on the market in terms of mechanical gaming keyboards that were wireless. In fact, there was one but now there is another: the Corsair K63 Wireless Mechanical Keyboard.

The Corsair K63 Wireless Mechanical Keyboard is just that, a mechanical keyboard that can be used without being physically plugged into your computer. The K63 Wireless is also a TLK or tenkeyless model; that means there is no number pad, resulting in a smaller footprint. Corsair has ensured that this is a true mechanical keyboard by including Cherry MX Red switches. Not only does this mean you will have get tactile feedback, but you know the keys will last a long time.

How does a wireless mechanical keyboard like this perform though? Let’s jump in and take a look! 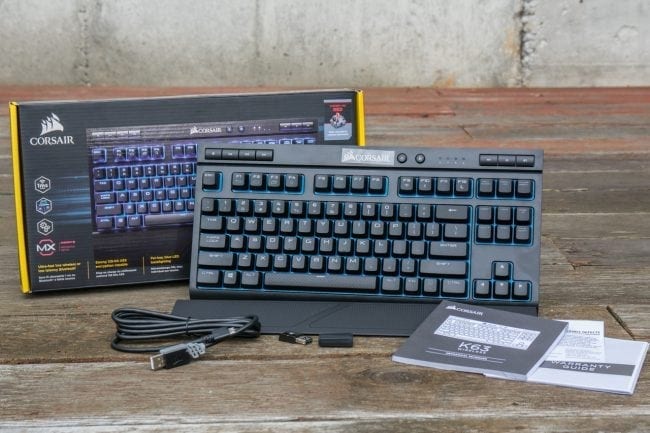 The Corsair K63 typically does not come with very much in the box, but because of its wireless nature, you do get a bit more. Inside the box is the Corsair K63 Wireless Gaming keyboard itself along with a USB cable for charging or allowing to stay wired, a wrist rest, a USB cable adapter, the 2.4GHz dongle, manual, and quickstart guides. If your computer has Bluetooth, you can forgo the included 2.4GHz dongle, but make sure you take the 2.4Ghz dongle of the package before recycling the box as it could easily be missed. 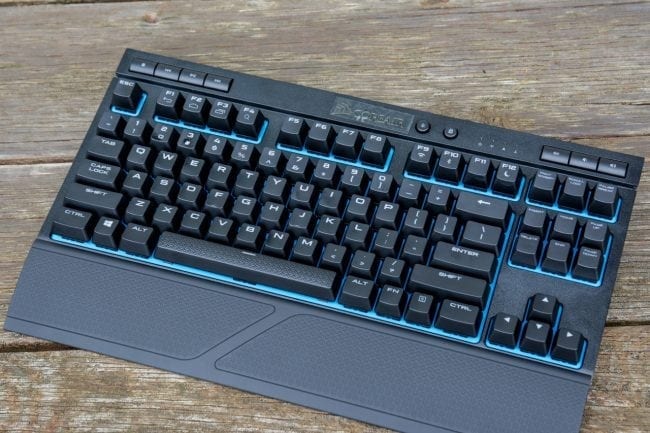 The one thing some people might notice, if they did not look at the box, was that the Corsair K63 Wireless keyboard has no numpad. This not only makes the keyboard more portable but if you are not going to use the number pad, why include one? I can’t remember a single game where I’ve ever used a numpad actually. I will miss the numpad for general use though, especially when typing in an IP address or doing something on the calculator, but that can easily be overcome.

Once you have taken the keyboard out of the box, you may or may not want to attach the wrist rest that is included. I personally like using the wrist rest, but your mileage may very. It snaps in really easily and if you decide not to use it, you can easily remove it and put it away. You will also note the colour of the Corsair K63 keyboard: black with a blue highlight. This blue area behind the keys help accentuate the blue LEDs that each key has; this gives it a nicer glowing feel to it but we will look at this in more detail later. 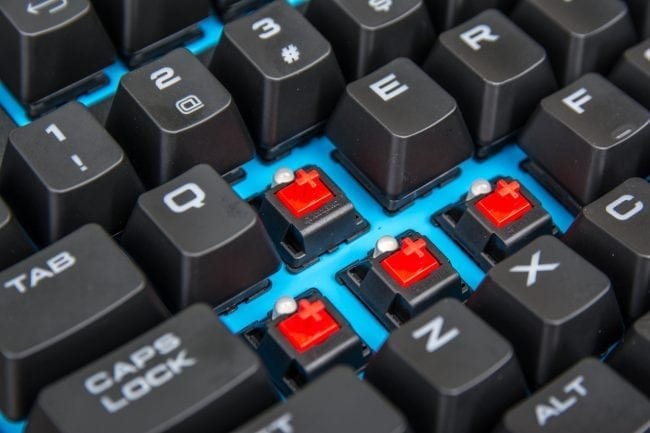 What is the first thing you do when you get a new keyboard? You pretend to type like a maniac to check out how the keys feel. Well, I was no different.

Before even plugging the keyboard in, I started typing like a 4 year old that just drank 2 cans of Jolt cola. I wanted to feel the keys, hear the keys and decide if I liked them or not. It has been a really long time since I used a proper mechanical keyboard, and the K63 not only comes with Cherry MX switches, but Cherry MX Red switches. Red switches are usually quieter so that is definitely a bonus for me.

The last mechanical keyboard I played with was a cheap one that had blue switches; those switches would keep the kids up when I tried to do anything with it. We will see how these Cherry MX Red switches will not only handle my typing, but if they will not wake up the kids. Each Cherry MX switch has a dedicated blue LED. Sorry, no RGB this time. 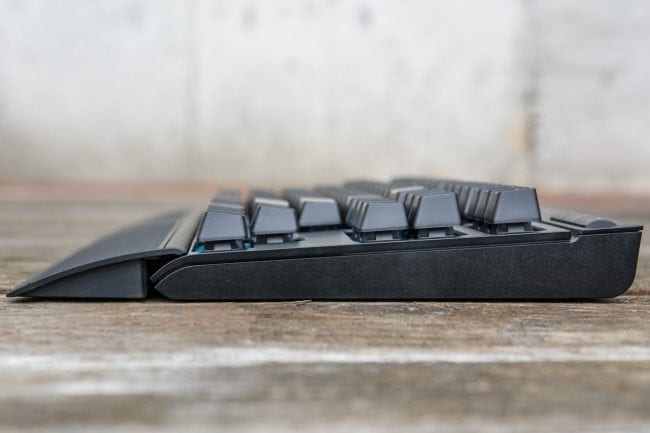 Looking at the Corsair K63 from the side shows you the height of the keycaps and the overall profile of the keyboard. It does have keyboard stands, but the weird thing I found was the stands did not have rubber at the ends like the bottom of the keyboard does.  When you extend the stands, the rubber feet near the wrist rest helped the keyboard stay put though, so that is not too bad. 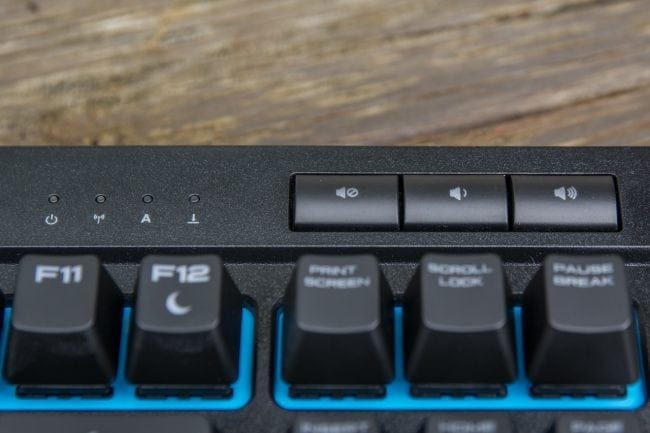 Zoom in close to the top right side of the Corsair K63 Wireless keyboard and you will see the volume keys and status LEDs for power, wireless, caps lock and scroll lock. 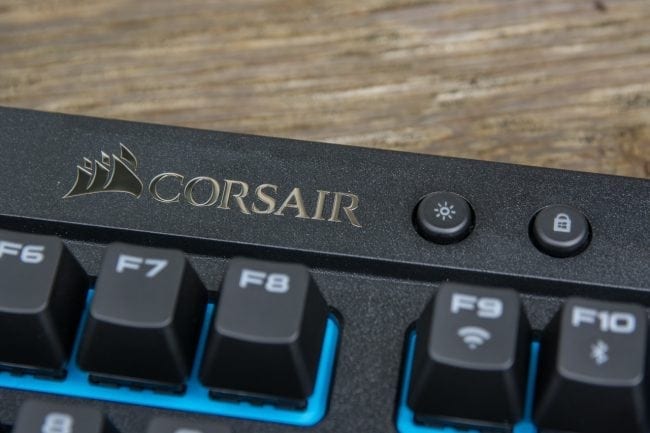 Move over a bit to the left and you are presented with the Corsair logo, the key lighting button and encryption button. More on these buttons later. 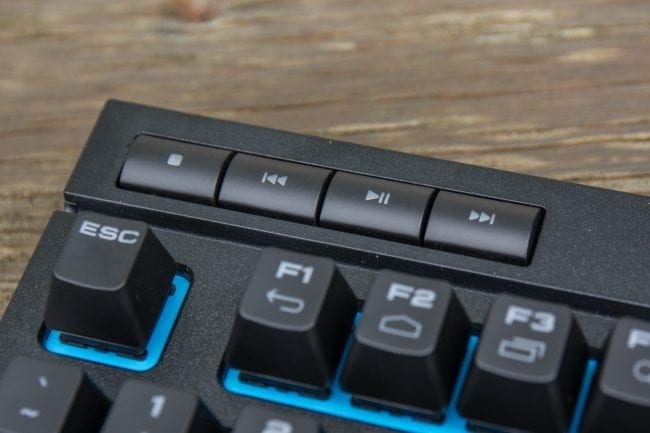 The playback media keys are on the far left of the keyboard: stop, reverse, start/pause, forward. These are perfect for those who listen to music while enjoying their favourite games. I personally like the inclusion of the media keys. To make some keyboards smaller, some manufactures have left out media keys altogether, but it is nice to see that Corsair has kept some for this wireless variant. Typically, Corsair media keys are on the right side of the keyboard above the numpad (if present) and includes their volume control knob, a feature some Corsair fans really enjoy. 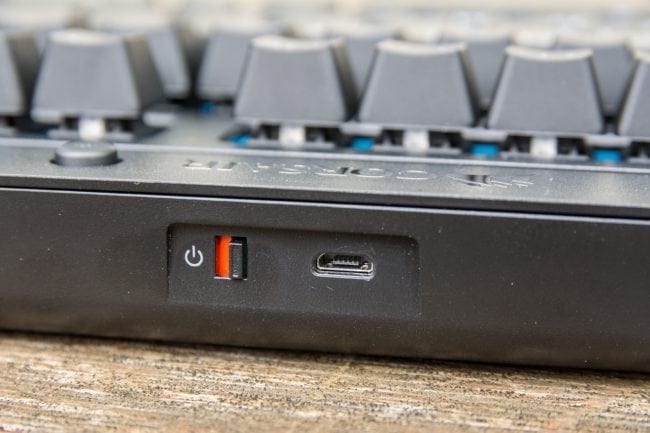 At the top of the Corsair K63 Wireless Mechanical Gaming keyboard is the on/off switch and the USB port. You can use the keyboard in two ways: wired and wireless.

On a side note, I love the on/off switch that this Corsair has because it allows me to disable the keyboard and leave the computer on. This stops little hands from smashing they keys and getting Windows into some crazy state that forces me to reboot. No, the kids do not enable “Sticky Keys.” It is some other weird mode. I can also easily remove the keyboard by unplugging it and placing it away from curious little hands too if I want them to stop smashing on the keyboard in general.