I took a look at the Corsair K63 as both a wired and wireless keyboard. Now, I’m not saying you should always keep it plugged in like I have been, but you seem to be able to. I would hope there is circuitry inside the K63 that would allow you to keep it always plugged in, but then why would you buy a wireless keyboard if you are never going to use it wirelessly?

Setting up the Corsair K63 Wireless Mechanical Gaming Keyboard via the 2.4GHz wireless dongle is easy, especially for Windows 10. The moment you plug in the dongle, Windows recognizes it right away. 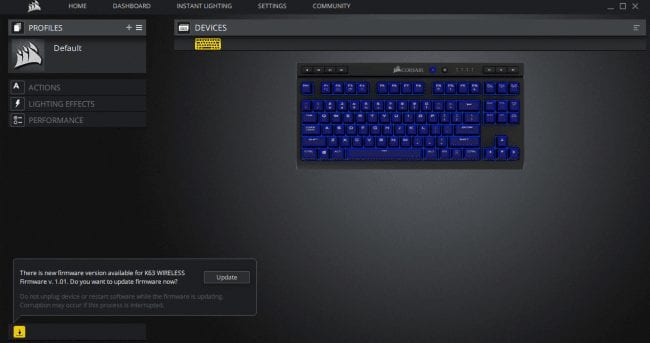 Corsair Utility Engine, or CUE, mentioned that there was a firmware upgrade for the K63, but I could not get it to trigger the firmware upgrade with the simple instructions provided. CUE, like other software packages for peripherals, allows you to customize certain aspects such as colour (if there was more than one colour), key lighting schemes, macros, and more.

Instead of going into the various settings CUE lets you configure, I decided to jump into a few rounds of Fortnite instead.

Gaming with the K63 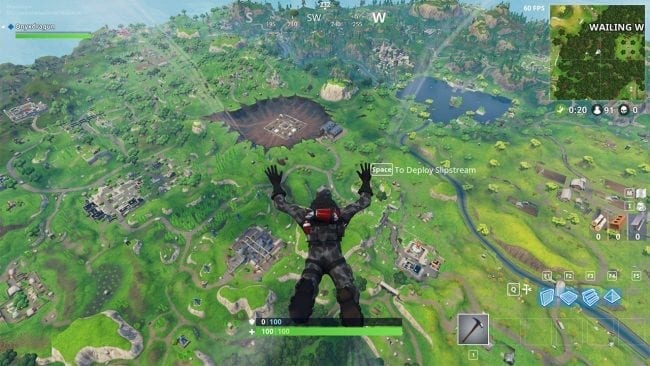 I am, by far, not the greatest Battle Royale player out there. In fact, I would say I’m fairly lousy at that genre of games. I do like playing them and it was neat to see how well the Corsair K63 Wireless Mechanical Gaming Keyboard would handle the fast-ish pace of the game.

I personally did not notice any lag with the 2.4GHz portion of the keyboard. Each key registered when I wanted it to. I even rolled my chair back 30 feet to see if I could get anything to introduce any input lag. If I had the Corsair Lapboard it might have been more comfortable to use the keyboard, away from the desk, but the wireless connection performed beautifully.

I even have a very noisy wireless environment in terms of devices chatting on the 2.4GHz wireless bands. It’s great to see the keyboard being able to keep up! The Corsair K63 with the lapboard could make it more comfortable for playing in front of a TV, mind you. 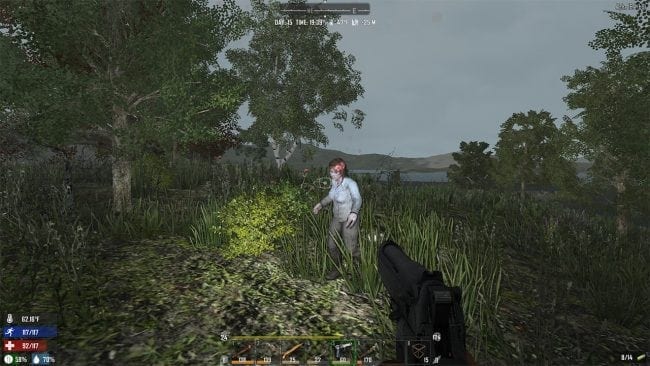 Another genre of game I play a fair amount is the survival world builders such as 7 Days to Die. The FPS aspect makes using a keyboard and mouse fairly important and sometimes you cannot hesitate or have input lag, or else you’re feeding your brains to the nearby zombies. I experienced no lag in input no matter how far away I took the Corsair K63 keyboard from the desk and moving around in the environment with the WASD keys was effortless.

What is normal LED brightness? Well, the K63 has a defaulted maximum brightness of about 75%. You have to go into the CUE software to specifically allow 100% brightness, but you will compromise battery life at 100%.

There has been the odd person who says they have experienced really short battery lives with the K63, but with this particular one, I’ve been running for hours longer than they have been reporting and my battery status was still showing a value of “High”.

If you are going to step away for a long period of time or you have turned off your computer, I would recommend turning off the K63 as well. Even as advanced as some power saving functionality can be, I do not always trust them, especially if I plan on not making use of a wireless device for more then 10-12 hours.

After about 3 days of my regular use, the power LED on the keyboard began to flash red, informing me that the battery was getting low. 3 days of use for me is pretty good for a wireless product and I could have extended that if I kept the LEDs off too.

It is possible to pop open the keyboard and check out the battery itself, though I have not done it with this particular keyboard. It’s reported that the K63 has a 2950mAh, 11.15Wh lithium battery and if you wanted to really calculate its power consumption, you probably could (but most people will not). The Corsair K63 Wireless keyboard could easily last hours of gameplay without having to be charged which is great and ultimately what people are going to be looking at.