Ok, we all know power levels are bull. What isn’t fictitious though is the speed rating on the latest memory kits from G.SKILL. The new Trident Z and Ripjaws V modules are designed to work with the latest 6th generation Intel Core processors and Z170 motherboards… and they feature speed ratings of up to 4000MHz. 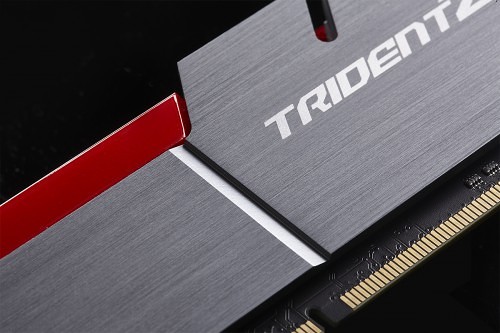 The Trident Z are the modules you want to look at if you want that speedy 4000MHz rating. These are G.SKILL’s successor to their high-end Trident memory modules, and are based on the DDR4 platform. The Trident Z modules have been fully tested on the new Skylake-S platform, which uses the newest Intel Z170 chipset.

The Ripjaws V modules are the more mainstream memory modules. G.SKILL is using a new head spreader design for the Ripjaws V series. They’re offering them in multiple colours, but this line will be your go-to for reliable mainstream performance RAM. Performance ratings for the Ripjaws V don’t quite reach as high, ranging from 2133MHz to a still high 3733MHz at ultra-low voltages.

No pricing has been announced, but G.SKILL did give us a nice graphic of what modules will be available. You can also check out the full press release for more info. 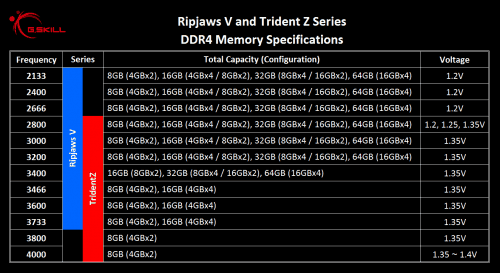 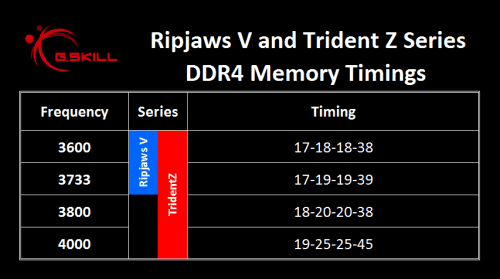 Trident Z Extreme DDR4 Memory – It’s Over 4000!
The new Trident Z DDR4 memory is the successor to the high-end Trident memory series and making its debut on the latest DDR4 standard, designed and tested for the next generation Skylake-S platform! For the first time in the history of extreme memory kits, Trident Z is entering the arena with a 4000MHz memory kit, built with highest-end Samsung IC memory chips and validated on the ASRock Z170 OC Formula motherboard.

Featuring a single-piece design that allows direct heat dissipation from heatspreader to cooling fin, dual-color construction for the ultimate system builds, and extreme XMP 2.0 support for simple overclocking setup that ranges from DDR4-2800MHz all the way to DDR4-4000MHz, nothing else comes close to the brink of extreme. Built with exceptionally hand-screened IC chips selected through a secret process developed from years of overclocking experience, Trident Z is the premier of extreme performance.

The Ripjaws V series DDR4 memory will be available in kits of various configurations and capacities, comprising of 4GB, 8GB, and 16GB modules with performance ranging from the standard 2133MHz to staggering 3733MHz at ultra-low voltages. The high-density 16GB single modules are manufactured from highly selected Samsung IC memory chips, packing both capacity and performance in a single module. And of course, all high performance kits are XMP 2.0 ready for easy BIOS tuning and setup, as well as rigorously tested under hours of grueling benchmarks and memory validation testing software on the latest motherboards from major motherboard vendors for maximum performance, compatibility, and stability.

With the updated new specifications, your next generation Skylake-S platform can run smoother than ever with more memory capacity options with the brand new Ripjaws V or Trident Z memory kits.

About G.SKILL
Established in 1989 by PC hardware enthusiasts, G.SKILL specializes in high performance memory and SSD products, designed for PC gamers and enthusiasts around the world. Combining technical innovation and rock solid quality through our in-house testing lab and talented R&D team, G.SKILL continues to create record-breaking memory for each generation of hardware and hold the no. 1 brand title in overclocking memory.